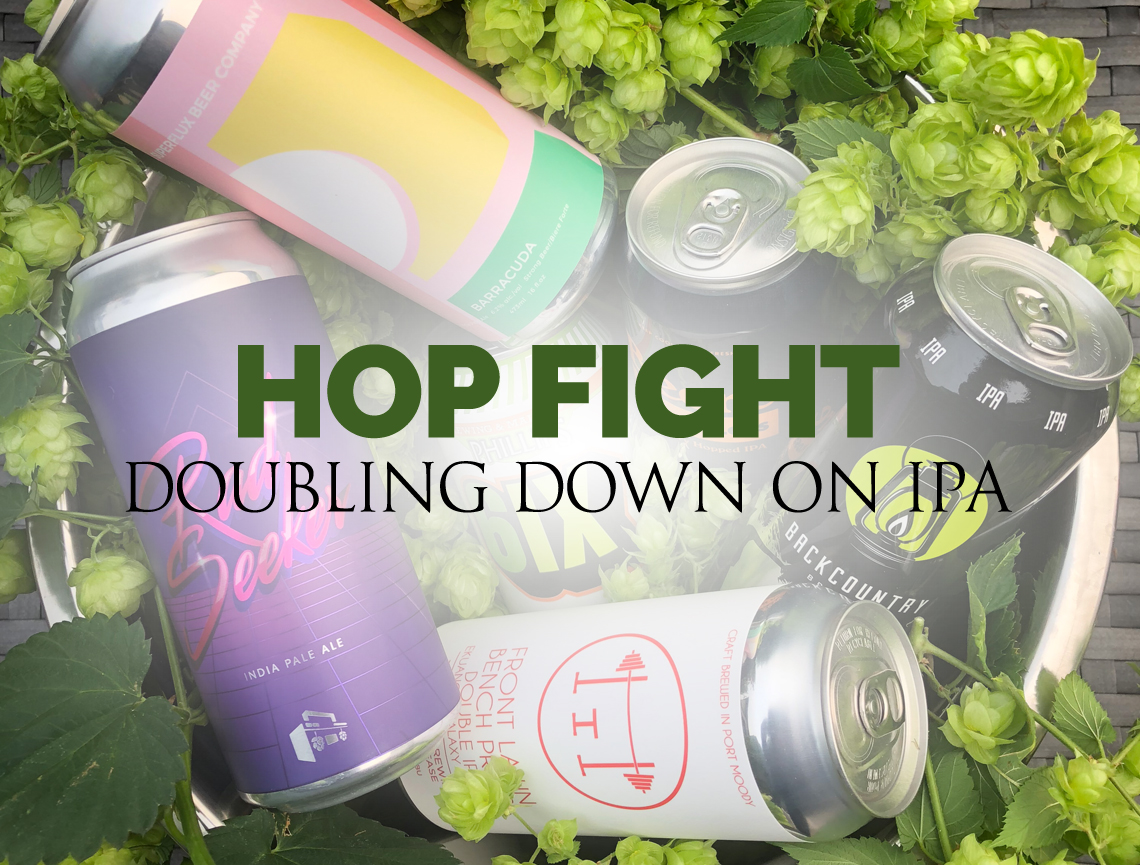 The What’s Brewing BC Craft Beer Tasting Panel reviews a set of hoppy IPAs, Double IPAs and Hazy IPAs in celebration of the hop harvest!

It’s hop harvest season! So we went out and got ourselves some serious modern IPAs to taste. As always, Jordan Knott from Legacy Liquor Store was tasked with finding a sextet of beverages. It’s was the first time the Panel would be rating IPAs, so we wanted hops, and lots of ’em. But a funny thing happened to IPAs in the years we were busy rating all those other styles.

There was a time not long ago when IPA was the “cheeseburger” of North American craft beer. The West Coast, being close to the primary sources of hops, led the way with ever more highly-hopped beverages in a kind of green, resiny arms race. Eventually some fans suffered from hop burnout, and there was talk of (shudder) lager becoming the next “it” beer style in craftland.

Then a new way of thinking about IPA took root, based on concoctions from the northeast US. In BC, the tipping point was when Steamworkswon Beer of the Year for it Flagship IPA at BC Beer Awards 2016. Since then it’s become harder to find a “regular” IPA in BC, as “new school” breweries like Boombox have been doubling down on variations of NEIPA to great acclaim. Check Mike the BeerRater’s telling monologue (overleaf) about Phillips’ 6IX, the only beer on this issue’s list that’s not hazy and unfiltered.

Incidentally, in a field of brilliantly marketed products from younger breweries, you have to give props to Phillips for the best beer name. With 6IX, a sly combination of Arabic and Roman numerals, they referenced the beer’s 6.0% ABV, its 69 IBU, and found a way to get in a sophomoric sex innuendo too. Hand well played.

DOUBLING DOWN ON DRY HOPS

The word ‘double’ shows up a lot in these beers’ descriptors, especially in reference to dry hopping. Alongside the migration towards hazy, we have seen the adoption of ‘DDH’ as a trendy badge representing hop gnarliness. Couple that with the separate concept of “Double IPA” and you get beers like the Twin Sails DDH DIPA, the kind of double-double you won’t find at Tim Hortons.

Thanks to their inherent juicy fruitiness, dumping hops in NEIPAs doesn’t make them more aggressively bitter in the way that classic WCIPAs get. So this newer generation of IPAs wear their IBUs (Internationall Bittering Units) differently; you’ll notice that only the “old school” Phillips entry has a number that could be considered high. It’s not just about IBUs anymore, Dorothy.