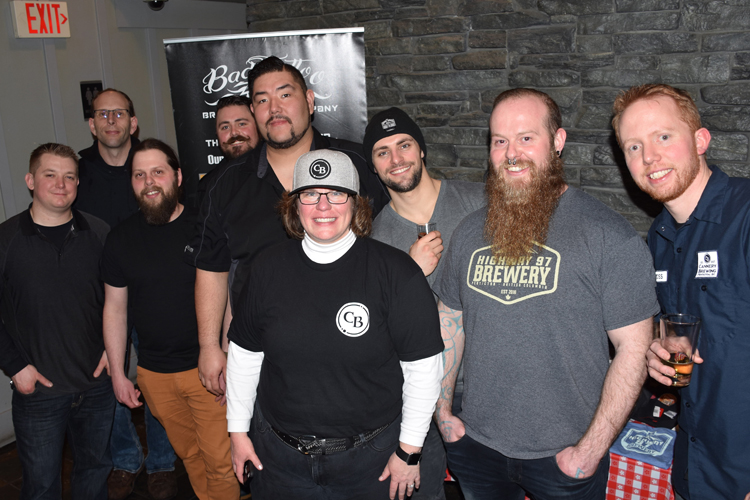 Above picture: Team members from the five Penticton breweries celebrate their successful Penticton Ale Trail tap takeover earlier this spring at St. Augustine’s in Vancouver. Each brewery brought 5 kegs, for a total of 25 Penticton taps.

After a long winter, we are now enjoying gorgeous days filled with sunshine and blue skies. Tourism season is here, and visitors are arriving to enjoy all of our outdoor activities, amazing fresh produce, beach activities, and of course our vibrant craft beer scene.

Check out the BCAleTrail website to help plan your trip to the Okanagan. We now have 16 craft breweries from Vernon to Big White, Kelowna, West Kelowna, Summerland, Penticton and Oliver. Plus, two more coming in Kelowna: Wild Ambition Brewing and Vice & Virtue Brewing.

Firehall Brewery is located in the heart of BC wine country in Oliver. Their Beer Shop & Social now includes a recently expanded patio and a great selection of beer gear. They regularly host jam nights and vinyl nights, plus, their Back Alley Concert Series will be back again this summer. Keep an eye open for their Table Beer Series No. 3 – Barrel-aged Barley Wine 2018.

Tin Whistle Brewery is celebrating the start of summer with some refreshing ales. The first ale is Paradise, a coconut wheat ale with hoppy citrus overtones. It will be available all summer in 650ml bombers and in draft. They also recently released Obsession, a beautiful hibiscus Belgium saison, the colour of rosé wine. This limited edition is available in 650ml bottles and in draft. Watch for their popular peach ale to be released in cans by July.

Highway 97 Brewing, now in its 2nd year of business, features a 36-seat taproom and patio. The taproom overlooks and is open to the brewing floor below. This summer they will have 10 beers available, 2 of which are made with fresh Okanagan fruit. Okanagan Fresh Fruit Hefeweizen features peaches and apricots, while their West Coast Summerweiss is made with berries and lemon zest. They also now offer an expanded lunch and dinner menu.

The team at Bad Tattoo Brewing are ramping up their production of craft beer and delicious pizzas. Check out the new items on their summer menu including the introduction of their own house made gelato. Continuing their goal of one month, one beer, this summer will see the return of crowd favourites Azacca What You Want Hazy Pale Ale in July, and Lucky 13 Double IPA in August. They will be launching a new beer in June, their Pear Lime Sour Gose.

Cannery Brewing has recently launched a new series of limited release beers that are available on tap and in 4-packs of 473ml cans. They feature gorgeous labels illustrated and designed by Penticton artist, Skyler Punnett. Watch for the Dualis Double IPA in early June and the rebranded Hop Chowdah Hazy New England IPA by late June. The Drupaceous Apricot Wheat Ale is also back for the summer! It’s the perfect choice for patios anywhere, including Cannery Brewing’s own pet-friendly patio.

When you are in Penticton, plan to attend the Penticton Farmers’ Market, which runs every Saturday morning until October. The market features local produce, baked goods and artisan items. You’ll often find craft breweries, cideries, distilleries, and wineries doing tastings and selling bottles and cans to go.

Summerland’s Detonate Brewing celebrated the start of their second year with the acquisition of a couple shiny, new 10hl fermentation tanks. Drop by the brewery and try their latest release, Taco Beer, brewed with tacos and flaked corn in the mash and chili, cumin, cilantro, lime, coriander, salt and pepper added to the boil.

If you are heading north to Kelowna, check out the newly opened Kind Brewing in West Kelowna. They’ve got a great patio space, which they hope to have open for this summer.

To find out more about the South Okanagan craft beer scene, join the CAMRA SO crew as we head to Firehall Brewery for their July 21st Back Alley Concert. We’ll have a shuttle from Penticton. It will be a great evening of craft beer, music and mingling with other craft beer lovers.

Kim Lawton
Kim Lawton is a veteran travel writer who has contributed to many publications. She is a craft beer fan, a long-time supporter of the craft beer movement, President of CAMRA South Okanagan, the Marketing Director at Cannery Brewing in Penticton and the Okanagan correspondent for BC Craft Beer Month. Kim writes the Beers, Beaches & Breweries column for What's Brewing.