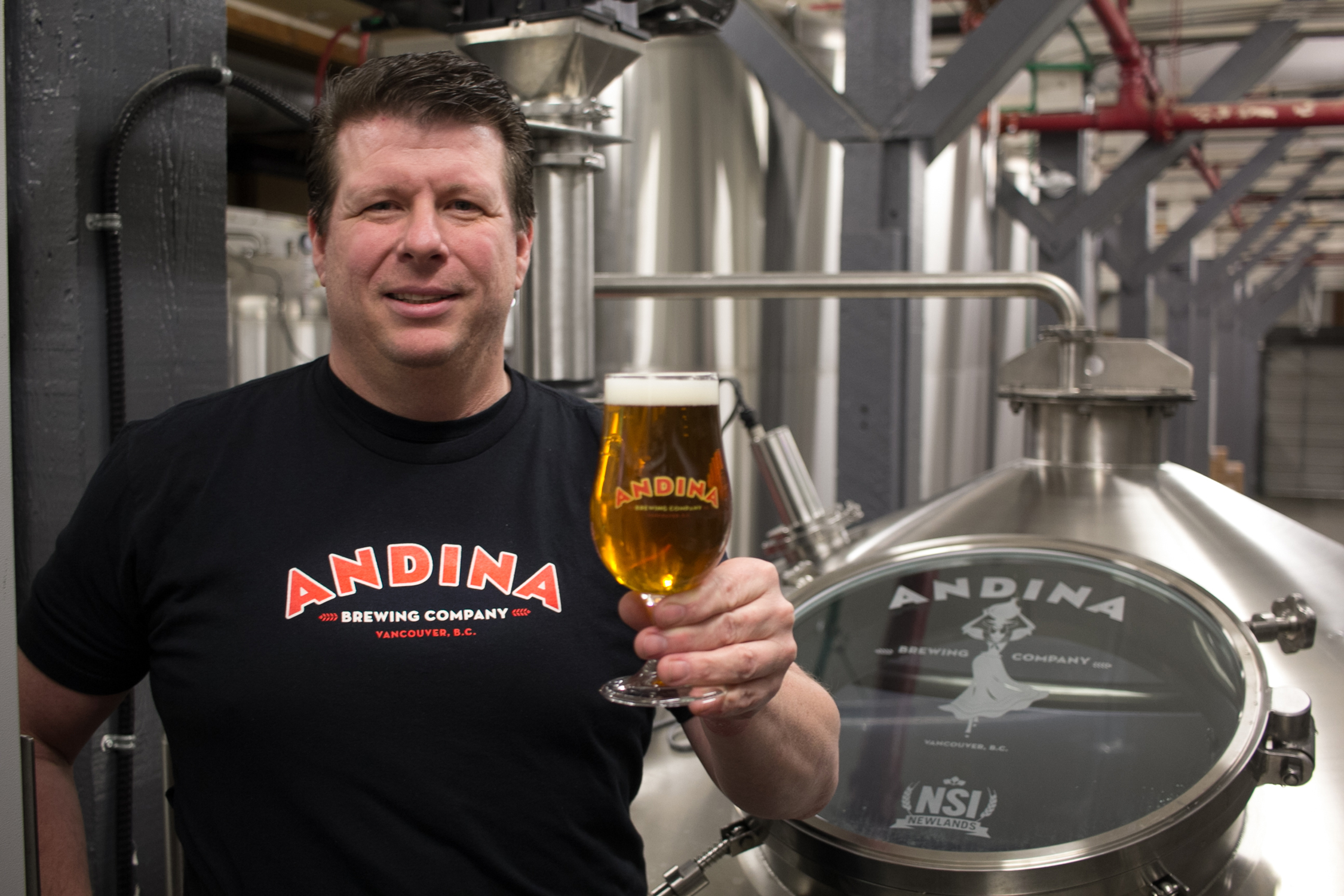 Michael Stewart started his brewing career in East Vancouver back in 1989, long before it became Yeast Van, at Shaftebury Brewing Company. Shaftebury was one of the original microbreweries in Vancouver and was located across the street from Parallel 49’s current location. Stewart has recently assumed the head brewer role at Andina Brewing Company on Powell Street, which is mere blocks from his first brewing job. Welcome back, Michael!

Stewart didn’t set out to be a brewer, in fact he worked for the predecessor to Electronic Arts as a computer programmer writing code for games. Back then, the gaming industry wasn’t the hot ticket that it is today and Stewart decided to apply to an ad for a brewer role at Shaftebury. He had been a homebrewer for many years and decided to take that passion and turn it into a career, a decision he has never regretted.

During his seven years at Shaftebury, Stewart worked with some names you are bound to recognize: Barry Benson, formerly of R&B Brewing Co., and Iain Hill, brewmaster and co-owner of Strange Fellows Brewing. These brewers, and others, helped shape what is now a vibrant community of craft breweries in Vancouver.

After leaving Shaftebury, Stewart worked in a brewpub in Coquitlam, for Backwoods Brewing (now Dead Frog Brewing), Big River Brewpub, and most recently, at Fuggles & Warlock Craftworks in Richmond. He estimates that during his professional brewing career, he has brewed 75 – 100 different beers and has over 3,000 brews under his belt.

When asked what beer he is most proud of, he reflects back to his early days at Shaftebury. And it isn’t the flagship Cream Ale that he mentions, it is the Shaftebury Rainforest Amber Ale. He created the recipe, came up with the name, and was involved in the marketing. Previously, the Shaftebury Man adorned the top of their tap handles until Stewart suggested they use a tree for the Rainforest Ale. While marketing the specific beer and tap handle might be a no-brainer today, it wasn’t something that was commonly done back then.

So what’s on Stewart’s agenda for Andina? More rotating and seasonal beers. He wants to have at least one beer with either Colombian coffee or South American fruit on tap at all times. When I visited Stewart, his guava saison was on tap as well as a coffee Kolsch. Both were well-made and flavourful beers that I believe the Vancouver market will enjoy.

Along with his new coffee series, Stewart is planning a sour series in the near future that will also benefit from the unique South American fruit that they import. When asked about the possibility of barrel aging, Stewart indicated that he’s hopeful that will be part of a future plan. He is intrigued as to what other characteristics these fruits could produce over time.

In addition to their current canned products, the new seasonals will also be packaged either in bottles or cans.

As Andina’s Head Brewer, Stewart is looking forward to experimenting and trying new styles. He reflected that developing new recipes and tweaking them is still fun after all these years. Every day is a learning opportunity and as the consumers’ tastes evolve, so should a brewer’s beer. He sees his role at Andina as an opportunity to experiment with new styles and especially, with the South American influence that Andina is known for with the fruit and Colombian coffee.

As someone who has been brewing for almost 30 years, Stewart’s advice to someone starting out is to experiment and step out of the box. Don’t be afraid to screw up as you’ll learn from the mistake and find a way to correct it. And lastly, don’t let small setbacks dissuade you, just stay with it.

It sounds like with the addition of Stewart, we should expect to see more one-off and rotating seasonals hit the taps at Andina in the near future. It’s always a pleasure to visit the Andina team and Stewart’s outgoing persona and creativity seem to be a great fit for Andina.