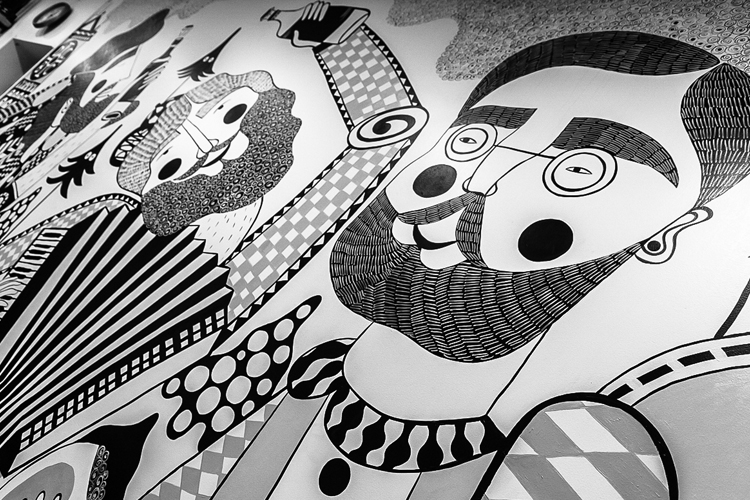 Ola Volo’s wall mural, a truly distinctive signature piece for the brewery, is another way that Doan’s is about family. Many in the craft beer industry or fan community have seen it and know that Mike and Evan are represented in its three German-flavoured, Magical Mystery Tour-ish caricatures. Everybody who knows the Doans knows that the middle figure is Evan. Many have probably figured, like I did, that Mike (who is usually seen wearing glasses) is the one on the right. Turns out that Ola drew Mike on the left when he had longer hair and was sans spectacles. The mystery man on the right is the other Doan brother.

Jon “Doc” Doan is the eldest of the three boys, five years older than Evan (Mike came along halfway between). As the non-brewery-founding sibling, Jon is the odd brother out from that perspective. But he’s fully invested in the brewery emotionally. He’s also a big part of how Doan’s came to be known for its beer.

One of the brewery’s early advantages was that it didn’t just make “generic beer.” It’s a good idea to specialize when you’re a new brewery, especially when you’re the smallest of many, many breweries in one neighbourhood. Their subtle advantage was their family’s Germanic roots, and their ace in the hole was big brother Jon.

The eldest Doan had a penchant for travel, and over the years that has often meant Europe, specifically the Fatherland, due partly to familial background as well as cultural attraction. “When I go to Europe, I like to visit the great beer-producing countries” Jon admits. “The Czechs brew great beer; the Belgians brew great beer. But to me, in Germany, the beer was more than just a product; it was a culture; a way of life.” Asked when he’s been to Germany, he rattles off, “2003, 2006, 2009, 2011…” Starting to sound as common as going to Oregon for some beer folks here.

Jon, who learned a bit of German in university, would get away with “looking Germanic” when travelling there, and blended in with the people in the beer halls. He remarks with awe, “The Germans take their beer so seriously. I asked a Bavarian guy once, ‘Don’t you guys worry about drinking too much?’ He said, ‘No, one and a half litres per day is perfectly healthy’.”

In Germany, he says, “It’s not just about how good the beer is; it’s how you consume it. Tradition is very important, and one of the traditions there is the large tables in the bier halls and biergartens, where you have no choice to socialize with others in your community who you might not know. Every time I ever went into a beer hall I made friends.”

One of the first things the Doans wanted to do in their new miniature beer hall was make is a similar place to socialize, hence the big table that forms the centrepiece of the lounge. Kevin agrees that “It’s because of their older brother going and seeing this in Germany.”

Jon says, “There’s no TV in here. To me, we have so many problems in this society; everyone has their blinders on and nobody talks anymore. People are desperate for an opportunity to socialize. And what better place to do it than a brewery?”

He continues, “When you go to a beer hall in Germany, some of them are ornately decorated. Some of them are 800 years old. It inspires you. I went to small monasteries in the countryside that had been brewing beer for 1000 years, and I talked to the monks that are still brewing. I learned about how much passion they have for what they’re doing.” About his brothers, he says, “These two guys have that same kind of passion.”

After being in Germany and drinking a lot of the local beer, he was bitterly disappointed on his return to Canada. “German beer, even by good [local] brewers…was not proper.”  Evan points out that the other BC breweries doing German beers at that time weren’t trying to do them “ultra-traditional.” They were using domestic malts, rather than the imported German varieties.

Even continues, “Our first 40 or 50 beers that were drinkable were IPAs. We went hop crazy.” But he says Jon was the one that introduced Kölsch. The boys tried some of the other offerings from breweries around BC, and enjoyed them, but Jon would say, “This is not at all like a German Kölsch.”

“Mike was just getting into water science at the time”, Evan reveals. “He looked up the Köln (Cologne, in Germany) water chemistry. So we mimicked that perfectly. That literally changed our beer forever.” Mike doesn’t argue: “That revolutionized it.” Water treating would become an important tool in capturing their passion for German style in a bottle.

Evan says, “When we did that, we used all Best Malt out of Germany, and I’ll never forget it. Ever. We made it as German as we possibly could…and that first one: it was better than those [others they had tried]. And it was just because we went all traditional.”

The passion didn’t stop at just German beers. “Then we started putting chalk in beer, which no one did in stout [locally to their knowledge], and we won best stout in BC [their first year in business]. We took a harsh stout: chocolate malt, chocolate rye, rye malt, rye flake…all things that impart a whole whack of flavour…and the chalk just balances it out. So the water chemistry changed our beer.”

Evan continues, “Then Mike bought the Altbier book, and he found the Kaiser malt, which is all Munich malt, which was never done here, ever. When I told people in the industry, they were like, ‘You can use it as 100% base malt?’ People were blown away, but we had been doing it for two years. That’s what we do today.”

Evan continues, “It was really fun to have that ultra-traditional German perspective, and it was all this guy”, pointing to Jon. “People were, like, ‘You opened with a Kölsch and an Altbier? What the f*** were you thinking?'”

Jon remarks, “I remember being in [the brewery] once when there was a guy from Köln who had the Kölsch, and he said, ‘That’s the best Kölsch I’ve had outside of Germany’.” Evan remembers the gentleman’s words: “‘Thank you for bringing me back home.’ That’s the best compliment we could ever have.”

The Making of a Cover Story: Behind The Scenes at Doan’s Craft Brewing