The question is: when is that beer unacceptable? When do you send it back?

I started writing this article after smelling diacetyl-bomb as I raised a glass of stout to my lips in an establishment that became known for bad beer, before it ran into other problems and closed. I had a strong suspicion that my server would not know what I was talking about if I complained, and the management would not care. So, I struggled through most of the beer. Then I got annoyed with myself for not complaining. I then transferred my anger to the server and management for likely not being receptive to the complaint I had never uttered. I resolved to write about the experience. I finally figured out: I was being totally unreasonable and maybe this was not the best time to be objective on the subject, so I put it on the back burner. Here we are a few years later and I have sent back a few unacceptable beers at various places and not been thrown out.

I think we all make allowances when craft beer is less than perfect, don’t we? You and I know craft beer is more variable than the mass-produced product; that’s part of its charm. We understand smaller breweries do not have the buying power to get the same specialty grains or hops year after year. We enjoy figuring out what has changed. We know small breweries don’t have the huge teams of people that mega-breweries dedicate to consistency control; I was going to say quality control, but that just stuck in the keyboard. If we have ever talked to a craft brewer, we have some idea of the constraints they work under. We also realize its tricky for bars and restaurants to keep lines clean when serving beer that has not been filtered to within an inch of its life. Cask-conditioned beer is even more difficult to get right than keg beer; that is why keg beer was invented. 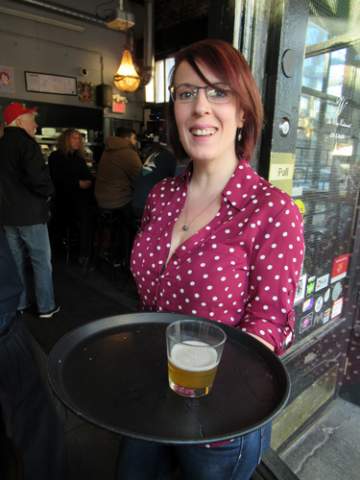 At least if you don’t like what you are drinking, there is typically something else decent available. One under-appreciated effect of the craft beer revolution is that bars do stock way more than one or two beers these days. When beer has true character, some people are not going to like it so establishments have to provide alternatives. In times gone by, if you did not like the house beer or its light alternative, you were generally out of luck, unless they had Guinness. Mass-produced beers were designed to be so inoffensive that anybody could tolerate them. However, it also meant that a lot of people claimed they did not like beer. That is because they had never encountered a beer that suited their palate. Thankfully that has changed.

Some people are fussy about cloudy beer and this often occurs with casks given inadequate settling time. Although I know it is not “supposed to look like that” as I have been told in several American pubs, I don’t mind a little extra nutrition, provided it does not affect the flavour. The current trend with casks these days is to experiment with ever more crazy additives. But there is usually clear notification of what is in the cask, either on a label or on a noticeboard. If you order a pint of cheese/tomato/basil/green pepper and onion kölsch then complain it tastes of pizza, you have only yourself to blame for the appropriate response.

Some people are fussy about under-carbonation. Being of British extraction, I am more concerned about over-carbonation. For the same reason, I am more concerned about a beer being too cold than not cold enough (no I do not like my beer warm!). However, a frigid gassy beer becomes drinkable with patience, of which I have limited supply hence the warming with my hands and swirling, driving my spouse crazy.

While I make allowances for inconsistency in flavour, I do object to off flavours. Most people can recognize when beer is vinegary but it is not the truly obvious problems that I am talking about. For example, I have written a fair amount about diacetyl in the past (What’s Brewing March 2008). It is similar to malty flavours, and small amounts provide character to certain beers, particularly Scottish ales. The ability to taste and smell diacetyl also varies widely among the population. Many brewers have become desensitized. Consequently, it is not a very obvious off flavor in a beer you have not tried before. People sensitive to diacetyl tend to have one pint then just figure they don’t like that particular beer and never order it again. That is a pity if the diacetyl was a result of rushing a particular batch, or of dirty lines. Another batch, or in a place that cleans lines regularly, the customer may have loved that beer and that is unfortunate for that brewer and the entire craft beer industry if it happens too frequently. Diacetyl from contamination comes with a lot of other unpleasant off flavours. With modern keg-washing machinery, keg contamination is very rare, but one-off casks, particularly those with unsterile additives, are at greater risk of contamination.

What effect does one rejection of a glass of beer have on the establishment, I wondered? So, I asked my favourite server: Julie of The Whip Gallery and Restaurant, the consummate British barmaid from Wolverhampton where they don’t take any nonsense. 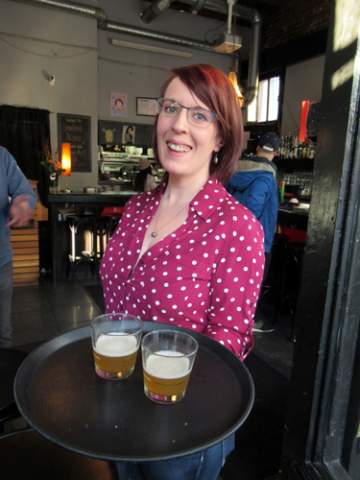 Julie does one better

“Not much,” she says “It depends whether it’s a regular or known beer geek, or a new face. If it is somebody I know, I will taste the beer myself. If it is clearly off I will pull that beer off and switch the keg. If I am not sure and it is a beer we regularly have on tap, I may ask my regulars if it is OK.” The usual response to a person who is not known is to simply replace that one beer with another of the customer’s choice and take no further action. What if several people reject the same beer? Julie says “Then I will switch the keg. I would also normally inform the brewery. Craft breweries will typically refund our money, but it depends on the brewery”

Lukas general manager at Devil’s Elbow says “If a customer just does not like a beer, I will replace it, provided they have not drunk too much of it. It’s just how I was trained. I will always ask why they don’t like it because that helps me figure out what beer we have on tap they might like. I have mostly worked for brewpub or brewery so other restaurants may handle things differently.” When it comes to a customer complaining that a beer is faulty, Lukas says “We clean out our lines every week” But what if the fault lies with the brewery and is not obvious when the keg is tapped? “If I don’t know the customer, I will ask their background. Are they in the business? If know them I tend to trust that. I will taste the beer in a clean glass and if necessary, I will change out the keg and try the next one of the same beer.”

Of course, the approaches above come from places I would chose to drink in. I hesitate to ask the same questions in places that are a lot less knowledgeable about what craft beer should really taste like. In those locations, I may just continue to send back beer with a stated reason and just hope that there are more people like me that will do that. If this happens frequently enough, we may create a rising tide of quality that will float all boats.

If you are encountering beer that is just about drinkable, but somehow not quite right, do consider educating your palate by taking advantage of the education programs provided by your local branch of CAMRA BC. CAMRA Vancouver is particularly active in this area.