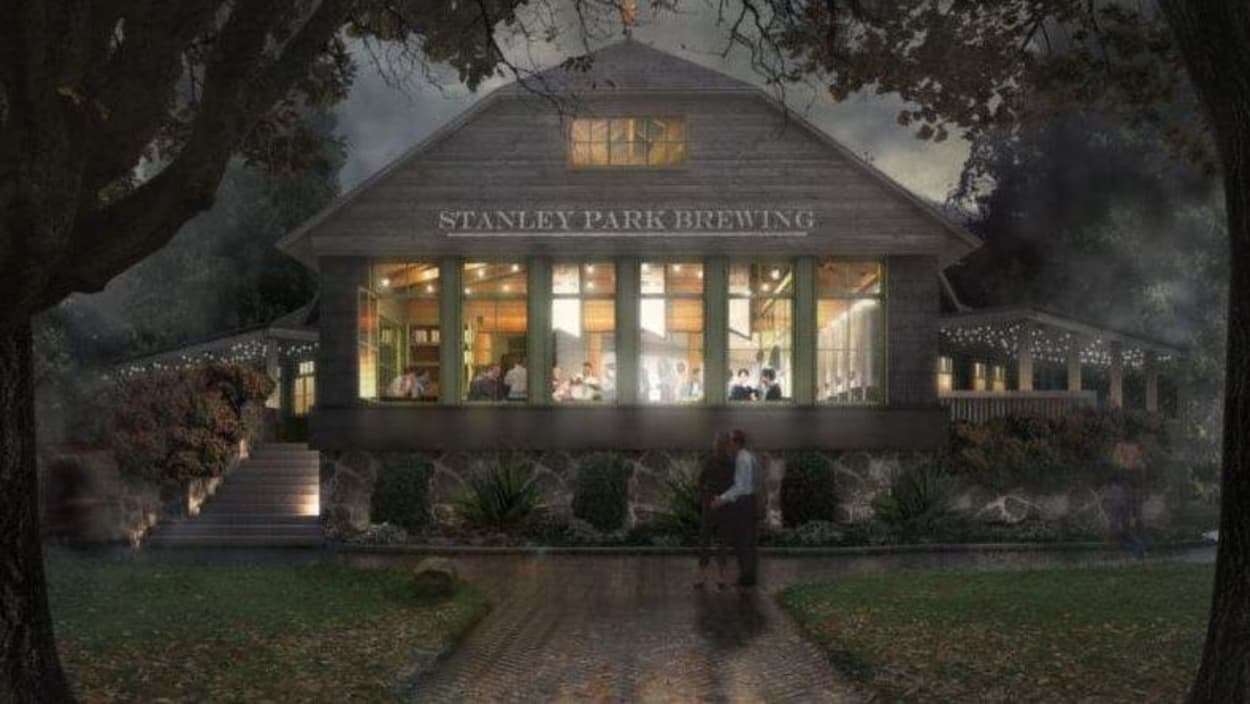 In my last article, I covered the history of Stanley Park Brewing (SPB). Since then, there has been even more intrigue, since the battle for the former Fish House in Stanley Park began in earnest at a Standing Committee on Policy and Strategic Priorities hearing in the Vancouver City Council chamber on January 17th, 2018.

Personally, I’m not a fan of SPB’s ultimate parent company, AB InBev [which is a drinks conglomerate formed by the merger of Anheuser Busch (Budweiser), Interbrew (Stella Artois, Labatt, etc), SABMiller (Fosters, Miller, etc), and AmBev (of Brazil, Latin America’s biggest beer producer)]. Nevertheless, I’ve looked at the discussion as objectively as possible to try and find the truths at the heart of this complicated issue.

The building known recently as the Fish House was opened in 1930 as the Sports Pavilion, a park clubhouse used mostly by golfers and tennis players. In 1949, it reopened as the Third Beach Tea House and started serving food for the first time. In 1974, it was reborn as The Beach House, then finally became The Fish House in Stanley Park in 1991.

In 2006, the lease from the Vancouver Board of Parks and Recreation was taken up by the SilverBirch hotel and resort group. While the restaurant was successful and operated continuously, they announced in May 2015 that they were not planning on renewing the lease in order to focus on their core business of hotels. The city put out a Request For Proposals, but was unable to come to a lease agreement with a potential new tenant.

The Park Board cites the “significant costs” of necessary renovations in this heritage space and the general risk of opening a new restaurant in this city as likely reasons for the lack of interest that year. According to Doug Devlin, Marketing Director at SPB, “…we got the original RFP in summer/fall 2015 but didn’t put in a proposal. I know they didn’t reach an agreement with the successful candidate from the RFP, but I don’t know the details. We then got a call from the Park Board in early 2016 asking if we’d be interested in submitting a proposal.”

The proposal was duly submitted, then approved with a 6 to 1 majority vote by the Park Board. The $4.5M plan would turn the 120-seat restaurant into a brewpub and growler bar with a capacity of around 100 (kept smaller in order to accommodate a 4 bbl / 5 hl brewhouse).

Not much has happened since then in terms of work to revive this heritage space because, as with any such change in Vancouver, local residents consulted as part of the planning permission process rejected the application (26 to 106). Next, a public meeting was held at the former Fish House on November 15th, 2017 where SPB, the Liquor Control and Licensing Branch and the Park Board met with 80 people to listen to and hopefully assuage their concerns.

It may seem strange that SPB are applying for a liquor primary licence when they are planning on opening a restaurant, but brewpubs require a liquor primary area in order to operate (about ⅓ of the space in this case). A Park Board representative said that, to all intents and purposes, they consider a brewpub to be a restaurant.

After over two years of sitting empty, the Park Board reports that the space has had security issues, animal damage, and presents an increasing fire risk: problems that could be exacerbated if left vacant even longer.

On January 17th, Vancouver City Council approved the liquor primary licence 7 votes to 1, with an amendment to create a Community Liaison Committee to monitor the Good Neighbour Agreement over the 6 month probation period. When asked how he felt about the decision, SPB General Manager Brian Kuhn said: “We are very excited to move forward with transforming the former Fish House into a new community-oriented restaurant with a small batch brewery that celebrates the spirit of the park. Our restaurant will be family-friendly and offer a full-service menu, thoughtfully designed to complement the great craft beer that is brewed on site. In addition, we will offer tours of our on-site brewery, beer-education, and growler fills. We believe that our concept will add a new dimension to Stanley Park that will be attractive to park visitors, respect the ecology and lifestyle of the Stanley Park community, and maintain the building’s status as an important and historic landmark.”

Perhaps it’s fear of Big Beer (and beer doesn’t come any bigger than AB InBev) that has some people upset about all this. Certainly, judging by some of the comments on social media, more of the sentiment is about stopping Budweiser than anything else. I completely understand that; my disdain for Big Beer is well documented, and I personally feel that AB InBev has conducted business in highly shady manner (quite possibly illegally) a number of times over the years. However, if the only group with the desire and budget to take on the heritage building in Stanley Park are AB InBev, I have to ask: isn’t that better than allowing it to fall into rack and ruin?

During January 2018, a community group known as Stanley Park Advocates (SPA) gained widespread mainstream press coverage for their campaign against the Stanley Park Brewing application for the former Fish House lease. Here’s my personal analysis of three key issues the group, as well as neighbourhood residents, have brought forward.

Smell from the brewery

A 4 bbl system is exceptionally small. In fact, there’s only one commercial brewery in Vancouver that uses a brewhouse this size, and that’s the one I use at Callister Brewing. Also, SPB plans on using a condenser to mitigate the escape of malty vapours (they will then recycle the condensed water).

I personally find the West End to be a very noisy place until quite late most nights, so I’m not sure how much more noise a restaurant in the Park would add. Nevertheless, SPB are voluntarily limiting their restaurant hours plan to mitigate the issue. They are also installing noise-cancelling windows. The Vancouver Police Department, when in consultation with City Council and the Park Board, offered no concerns.

This seems to be SPA’s focus. Apparent bird enthusiasts in the group were quoted by CBC News as saying, “Any new disturbance is likely cause for [local Great Blue Herons] to abandon” their local breeding grounds. They continue “[The herons] are at risk, on the brink of becoming endangered.”

Nobody wants the birds to become distressed, but I must question this latter claim. As an amateur ornithology enthusiast myself, I decided to take a look on Wikipedia (please donate). This regional subspecies are found in coastal areas all the way from Mexico to Alaska. I found that these birds are classified “LC” (Least Concerned, or to use the vernacular, “common”).

Even if I considered these Stanley Park herons to be a special subspecies (I don’t), I’d be impressed that they have maintained breeding grounds in the Park when you consider events like the Celebration of Light, Malkin Bowl concerts and many other very noisy events held throughout the year around BC’s most densely populated neighbourhoods.

The Vancouver Park Board, in conjunction with the Stanley Park Ecological Society, stated in a press release that they were not going to do an assessment on the herons as there was no need: “The Stanley Park nesting colony co-exists with constant use of the surrounding area by people, dogs, tennis, lawn mowing and other park recreation and maintenance activities. In fact, some heron colonies benefit from urban locations because human use can reduce eagle predation on eggs and chicks.”

No problem there, apparently. It seems that the herons have a history of moving nests around the park, often to louder and louder locations, the noise evidently providing protection from predators.

What are other local bird fans saying? At the Vancouver City Council Standing Committee hearing held on January 17th, conflicting reports from local amateur ornithologists were presented. It seems that we’re left without consensus on this issue.

A Brief History of Stanley Park Brewing, Part I

FROM THE NEWSROOM: RELATED NEWS