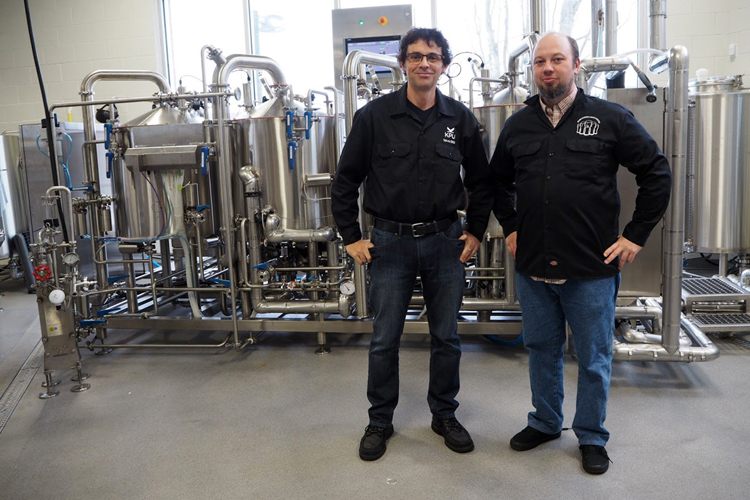 As the BC craft beer industry has rapidly expanded, so has the need for qualified, well-educated brewery staff. In 2013, Kwantlen Polytechnic University (KPU) put together an industry advisory council with the intent of providing an option for education in BC and developing a curriculum that met the specific needs of the local industry. The Brewing and Brewery Operations diploma program launched at KPU’s Langley campus in 2014. The two-year program includes academic subjects, and students develop hands-on skills working in the state-of-the-art brewery purpose-built on campus.

Mike Garson (of Mike’s Craft Beer) and I toured the facility in early November. This is no cute mock-up, the 4,500 square foot space is full of gleaming stainless steel and has all the bells and whistles you’d expect at a modern brewery. “We always knew we wanted to have a good hands on practical component, we knew that we needed an actual real brewery because that’s what the industry really needs. There’s a lot of opportunities for just classroom based learning, but I think that nothing can replace experience”, instructor Alek Egi said of the brewery.

There are six manual pilot systems with a capacity of 40 litres each, as well as a fully automatic mini-brewhouse donated by Newlands Systems (NSI) with a capacity 200 litres per batch. “The NSI system was really designed for teaching,” Alek says. “Once [students] become comfortable brewing on the NSI or the pilot system, they can easily go into a larger brewery. This is what sells the program. When people come here and look at it. . . this is obviously what everybody would like to do here.”

Along with twelve 200-litre fermenters, the brewery houses two 200-litre brite tanks, a new 400-litre brite tank, transfer and filtration equipment, kegging and bottling equipment, a grain room, a cold room, and a growler fill station. KPU also invested significantly in quality control equipment, giving students the opportunity to use high-tech machines that provide detailed analyses of samples collected throughout the brewing process. Although not every brewery will have access to this level of equipment, the process of data analysis is extremely important. “We are constantly collecting samples from every stage of brewing. We do that from the very beginning, from the very first brew day,” Alek states. They use this information in their course on calculations, determining things like brewhouse efficiency. “And then [students will] be able to comment on where is the room for improvement, what can we do better? We try to combine all the hands-on practical knowledge with everything we do in the classroom, and we go back and forth.”

Significantly, KPU is the only Canadian school to achieve recognition from the Master Brewers Association of the Americas. DeAnne Bremner, communications coordinator for the program, said of the process “It was very comprehensive what they reviewed, down to what kind of resource materials we supplied to students through the library, to how much brewing time they get, the equipment they’re learning on, to the backgrounds of all the instructors and the variety of all the courses they’re learning. It was a pretty cool acknowledgement that they looked at our program and said that you’re recognized as offering a standard of excellence and education around brewing.”

In late 2013 Nancy More and Dominic Bernard were tasked with the job of developing the curriculum for the program. “Dom and I had to sit down and go ‘what does a student need to know coming out of the brewery?’ and we looked at it from a point of view of not only a student coming out and going to work in a brewery but also on a higher level if someone wants to come and open up a brewery what are the other things they need to know about the industry” Nancy explains that brewing is a mixture of both art and science and they found that the balance between these created some challenges in developing the program. “We get a lot of people applying to the program that don’t actually understand how much science there is to brewing beer and don’t have the high school science prerequisites to be able to do it. Making beer is science. It requires an understanding of that. If you’re going to be the person that is solving problems and developing recipes you need to understand your science. How do we balance that with opening it up to as many people as we can?”

Another challenge is the wide variation in brewing methods in the industry itself – from tiny micro breweries operating with limited technology and sometimes even DIY equipment to massive breweries with serious investment into automated systems and in-house quality control labs. Nancy said that their goal is for students to learn both process control methods for quality assurance when high tech tools are absent, as well as understanding how to use the quality control tools when they are available. DeAnn says another goal of the KPU program was to create a consistent experience, “If, for example, it was just all classroom and lecture and they were going out to different breweries, everybody kind of has their own way of doing things so there was the intention to create generations of new brewers who had the same level of quality control, work safe, etc. So they were really learning from a place of agreement, but at a high level and then take that into the industry so there is more of a standard.”

The students spend four semesters at KPU learning a combination of theory and practical experience in the brewery. They typically brew on Tuesdays and Wednesdays, producing about 400L per day. On Thursdays the beer is packaged, either into 20L kegs for dispensing at the growler fill station, or into bottles for sensory training and quality control purposes. The students are split up into teams of 2 for the manual systems, 2-3 on the NSI system, as well there is a transfer and filtration team and a quality control team.

In addition to gaining experience at the brewery, the students are encouraged to find work in brewing while in the program. “I pretty much got a job in the industry a week into my first semester as assistant brewer at Yaletown Brewing. I wouldn’t have found out about it if it wasn’t for KPU letting students know these jobs are available when people are starting to look and it’s only grown since then”, says Ashley Brooks, a student from the first graduating class, “KPU has done a really good job on finding out who’s looking for people and letting students know.” Ashley moved on to work at Big Ridge as head brewer during her second year in the program and is now at Four Winds. 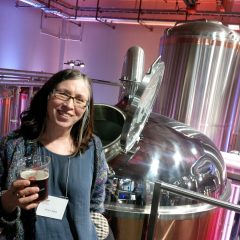 DeAnn also spoke of the growing level of interest from the industry, “They get to know the grads and they’ve hired the students on. There is a huge amount of respect for the students and the grads that are coming out of the program. They are excited.” KPU also sees its program as part of the development of a center of excellence for brewing in BC. This plays a role in KPU’s international recruitment programs, and the program has seen interest from South America, Asia, the US and even Europe due to the unique styles being developed out of the west coast.

“There is going to be a high demand for skilled workers. People who want to start up a brewery are still going to do it, and this will help them succeed. It will set a baseline for the quality of work that is needed to get a job at a brewery,” said Michael Nicholson, another alum from the first graduating class, who joined Britannia Brewing as they were starting up. “It’s going to be a bit of competition for shelf space; the quality of the beers is going up. I think KPU is going to play a big part in that, too, by improving the quality of the work, and I think the industry is going to thrive because of that.”

Chelsea and Mike’s full interview with the faculty and students at the KPU Brewing Operations Program is available at https://pacificbeerchat.com as a three-part episode. More of Chelsea’s writing can be found at BrewtifulBC.ca.