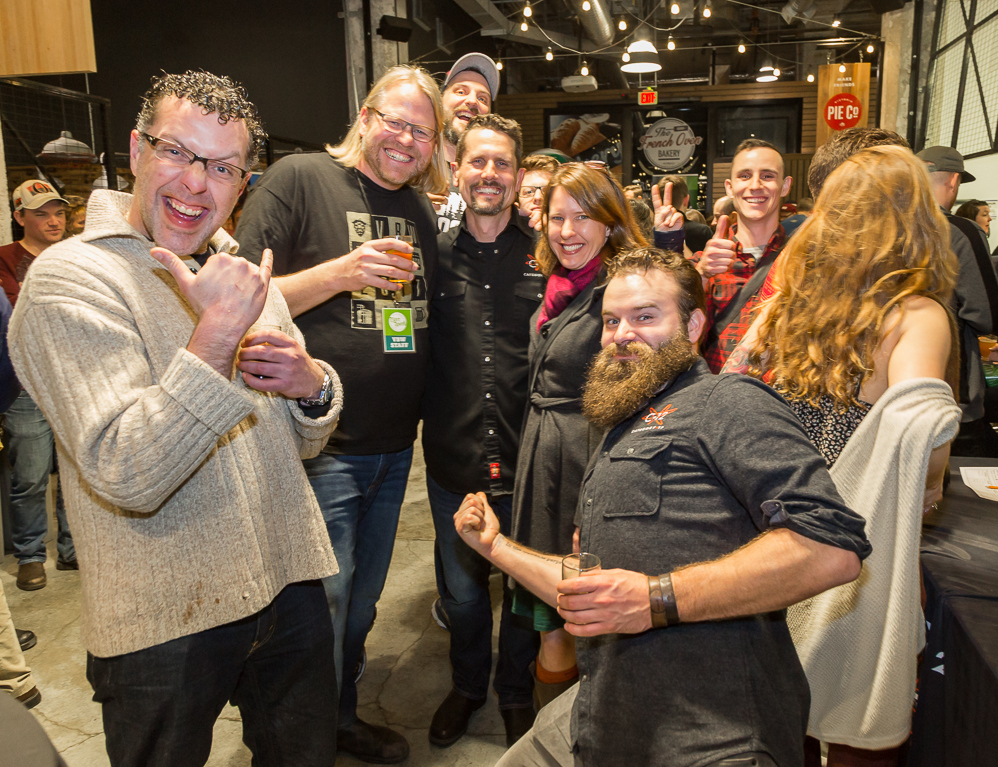 In March 2017, some of us mainlander What’s Brewing types schlepped our way over the Georgia Strait to experience the Fourth Annual Victoria Beer Week. This story chronicles what we found on our South Island expedition.

First up off the Swartz Bay ferry was a mandatory stop in Saanichton at Category 12 Brewing. Owner Karen Kuzyk was on hand and was courteous enough to give us an unscheduled tour of their impressive brewhouse; getting to see their wood-aging program up close was barrels of fun. Also, the beers were amazing, so it was a great start to our weekend. Highly recommended. After loading up our growlers, we checked into Hotel Zed (more on that) then got ready for some serious Island celebrating, learning and tasting, VBW style.

Like the Beer Weeks in other cities like Vancouver, this festival is not a single celebration, but rather a collection of local events from one weekend to another. Our first outing was Friday Night Casks. Like many of VBW’s cornerstone events, it’s held at the Victoria Public Market, which is a really festive place to be.

The footprint works well; even with a full house, people can move around. There’s a large kitchen with ample space at the serving counter to grab some grub without having to elbow your way in. Everybody seems to be happy.

All About the Wood

This event was focussed on barrel-aged beer. You’ll find a number of impressive ales in a session like this. On hand in 2017 were Bad Tattoo, Bomber, Category 12, Central City, Driftwood Brewery, Four Winds, Longwood Brewery, Moon Under Water, Powell Street, Spinnakers, Strange Fellows, Townsite and Yellow Dog. Highly recommended. In 2018 this will be indoors at the Public Market, so you can take your coat off. Check out our interview with Bad Tattoo’s Rob Theroux. 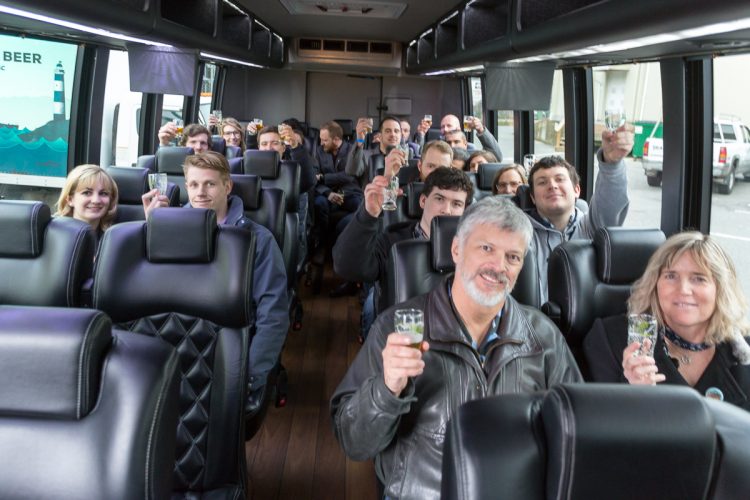 When’s the last time a brewing legend stood in front of you and gave the brewery tour himself? Sean Hoyne took a hands-on approach to entertaining his guest during the Definitive Victoria Brewery Crawl, and What’s Brewing was there to record it. Check out what Sean has to say about these three beers.

Dark Matter: What Is It? 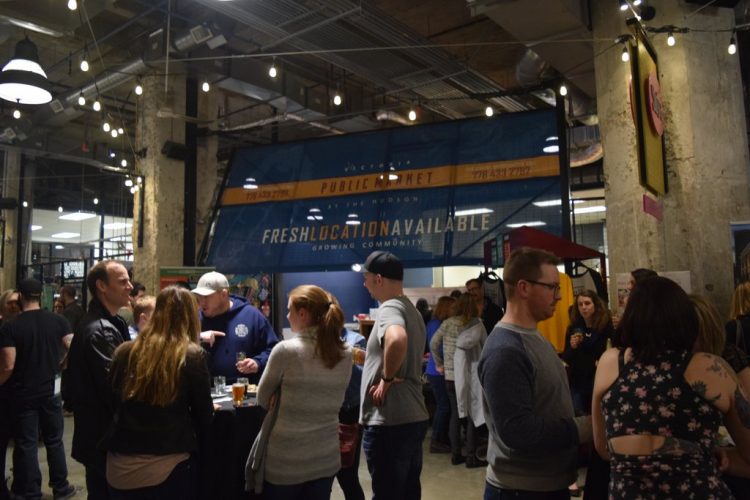 For Fishing For Beer, we were back at the Market for beer and seafood. The regular ticket included fish and seafood from vendors at the Public Market. The premium ticket also included a special Crab Boil. A good time was had at this tribute to West Coast lifestyle.

One of the educational events during Beer Week included a unique two-part event: Beer School. During Class #1, Chris Lukie of Swans led a hands-on demonstration of brewing during Beer School. Attendees gathered in a meeting room for a presentation of brewing theory, then we moved into the brewhouse to actually get involved in the brew. One by one, the beer students climbed the stairs up to where the brewer works and helped pitch hops into the boil. Later on, we collected the fruits of our labour after the beer was bottled: a drinkable souvenir. Check out Beer School 2018

Class #2 at Beer School 2017 saw us back in the meeting room for an excellent presentation by BC’s most renowned beer historian, Greg Evans. Greg’s 2017 seminar was entitled  “The Short Thirst and the Long Thirst – A Brief History of Prohibition in BC and the USA”. His combination of affable personality and deep knowledge makes for an informative and entertaining learning experience. Get to know more about Greg.

For our getaway, we checked in at Victoria’s funkiest digs, Hotel Zed. Our congenial host Jonathan showed us around. Check out the Zedinator waterslide with pink exterior. That’s just a hint of the blast of colour that you’ll experience at these unique accommodations.

You can’t be unhappy when surrounded by Zed’s loud and colourful aesthetic; it’s singularly fun. The retro technicolour facade is matched by the creativity: for starters, every room is suppled with a rotary dial phone! When’s the last time you saw one of those (besides your attic) .Plus, come on, they have a Volkswagen Bus as their complimentary hotel shuttle. You can’t not enjoy the ride.There’s nothing like Hotel Zed, except for the other one in Kelowna that is. www.hotelzed.com

Beer writer (and occasional What’s Brewing contributor) Joe Wiebe wears many hats in the BC craft beer scene, and amongst them is that of Producer of VBW. The author of Craft Beer Revolution was our host and MC at most events.

Also highly responsible for VBW’s success is Director Sheleena Gutierrez, who along with Joe is the driving force behind the fest. One of Sheleena’s many moves was to bring in VBW’s Partnership Coordinator Lori Muñoz Malcolm of HeartPress PR, who we spoke to during the event.

As we’ve noted before, What’s Brewing believes that the very best festivals are often run by volunteer-primary work groups, and VBW is no exception. It’s produced by a non-profit Victoria Beer Week Society, with an executive comprised of passionate local event managers and beer geeks. Hats off to the Directors behind the scenes making sure the Week runs as it should. Get to know them here.

The experience under their belts in organizing VBW’s fourth year showed, as all events we attended were really well done. But don’t take it from a lowly beer writer. How about an endorsement from someone who, from behind the scenes, would know a good event from a mediocre one. Townsite Brewing’s General Manager Chloe Smith says,

“These organizers are killing it, in my opinion. Their events are built with a unique, outside of the box kind of thinking that portrays our industry perfectly. I highly recommend the entire week.”

Many thanks to Joe, Lori and Hotel Zed for a fabulous visit in 2017. What’s Brewing can confirm that VBW is a first-class craft beer experience. Add in the general opportunity to tour the rich number of historic and exceptional breweries in the South Island area, and you’ve got a fantastic pre-Spring Break getaway.

SPECIAL OFFER: Use promo code “WHATSBREWING” to save $5 on most events: vicbeerweek.ticketrocket.co