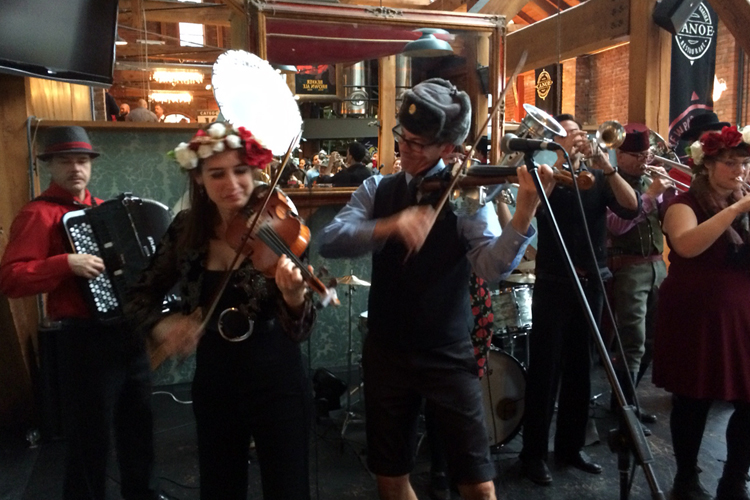 As we do every year, What’s Brewing attended the GCBF and is always the case, the scene was excellent. We caught up with old friends in the industry and from the beer community at large. People are forever telling us they read and enjoy our publication, so that is satisfaction in itself.

Its always the beer highlight of the year and this year was the 25th anniversary of the event; adding an extra flavor to the proceedings.

The taste profiles of all the range of beers continue to surprise and enhance the marketplace. The energy of the youth movement in the business continues driving the industry.

There’s an  excitement, as always is the case with continued new faces coming on board the scene.

Great thanks to GCBF for giving us this chance to explore and enhance our beer experience.

Much thanks to Hoyne and Driftwood and GCBF for inviting us to the after party soiree at their breweries’ shared lot, with the generous cookout bbq, refreshing beers on draught and the superb entertainment. Whats Brewing caught up with its old friends from the beer writing movement; Stephen Beaumont and Tom Daldorf of the Celebrator Beer News, not to mention all the new breweries and their crews coming into the scene.

Another top notch year for this festival.

It had been my plan to do this trip for some decades. My roots are N.B.

It was pleasure to explore this in depth enjoying first, Nova Scotia selections; then New Brunswick. Both provinces are providing breweries with a chance to showcase their products through their government liquor outlets and Whats Brewing announced we were looking at this when we arrived at selected stores to buy craft beer for the travelling road cooler. We talked to many staffers on the topic. The level of enthusiasm is very high with folks telling a multitude of stories and offering beer opinions wide ranging across the board. Everyone tells you a new place to explore or about a new brewery, beer, coming on board the movement.

The trip started in Halifax and ended in Fredericton and included the beer scene randomly as we went and discovered. Lobster was available at many pubs and restaurants and retail lobster stores, in both provinces. Its proven to go well with a wide variety of craft styles as proven by my research on this adventure.

It was a pleasure to explore new craft beers and eat fresh from the sea lobster in this celebration of the Maritime beer scene.

Many thanks to all the places and folks we talked to on this trip, here’s a few in:

There were grand beers and moments throughout and of course the ever present travel cooler Whats Brewing carries on all sojourns everywhere. Stopping for a craft picnic of local breads, cheeses, fresh grown fruit and beers throughout our journey; has been my mainstay of beer travelling since beginning of my beer travels.

Thanks to all who talked with us and shared their story in the continuing and expanding story that is Canada’s beer movement.

Brew Loops in Kamloops, BC

In their 3rd year of this festival, it spreads out across the city with a number of facets.

Whats Brewing attended the Friday block party at Red Beard Café; with a midway for charity, grand selection of craft brewers, and some great food truck selections. People are a friendly lot in Kamloops and a great time was had by all. 3 musical acts on the night for the pleasure of beer festival attendees.

Saturday Morning: Farmers market tasting event where craft brewers present their products for tasting and also drinking beside the long running and true farmers market. An educational time for new consumers to the scene and old hands alike.

Saturday night cask party, where casks are paired with local food businesses and consumers can experience the variety of brewer’s skills as showcased in cask. Each brewery is paired with fresh local food in a unique, one of a kind beer evening.

A sellout. The theme; was 50’s Greasers; so costumes are encouraged. Whats Brewing enjoyed the evening which also included a variety of themed acts from the era; music and dancers, good show.

Good Job to Brew Loops team for growing the beer movement in Kamloops.

6th Annual Winterbrau at Canoe Brewpub in Victoria, BC

Whats Brewing attends this event every year which reflects a very local and fresh character to the beer movement. Breweries are spread out throughout the historic heritage designated landmark building (1894 City Lights Building) right on the inner harbor. The brick, bean and huge windows showcase the nature of the old town all around, on all sides.

Young wait staff move throughout the rooms  with handcrafted foods, prepared  fresh from the spacious kitchen and it is always a taste sensation at Canoe. Food was plentiful and the one price includes everything.

Brewers and local aficionados mingle in the atmosphere of good beers whilst being thoroughly entertained by Bucan Bucan, a troup of Baltic Inspired musicians who play annually. They put on an upbeat, diverse show, to the appreciation of a receptive crowd.

Whats Brewing on the beat