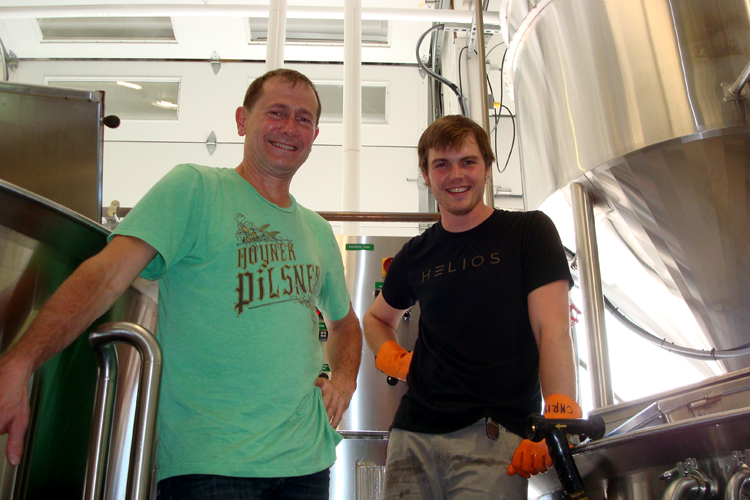 I heard through the grapevine that Sean Hoyne had given away a brewery, so I went down to Hoyne Brewing to find out the facts. When I got there Sean first offered me a beer, so I asked if he had any special beer he wanted me to try. His eyes lit up and he insisted that there were two stories that I should tell. “First”, he said, “I want you to try this beer. It’s called Carte Blanche White IPA.” Sean told how his first brewing job was in 1989 at the new Swans Hotel and Brewpub in Victoria. The brewery was designed and installed by the legendary Frank Appleton, a Yorkshire-born international brewery consultant living in British Columbia. “I had the great honour of learning all that I know about brewing from Frank, and I’ll never be able to repay that debt, so I believe in passing on that knowledge”, he said. “Make great beer,” Frank told Sean. “The rest will follow.”

Sean has four young assistant brewers whom he has taught about the brewing and production of beer: Dave McNaughton, Chris McCrodon, Antoine Foukal, and Dylan Hoyne. All of them have completed five years apprenticed to Sean, and earlier this year he gave them the challenge (Carte Blanche) to create a new and unique beer without his involvement. They had to plan the recipe, chose the name, design the label image, and decide on the brewing processes that they would use. The final recipe called for some specialty malts that had to be ordered in, and the yeast and hops used came from Europe. Sean stayed out of the brew house on brew day as he did not want to be involved at all. The result is a beer that he is very pleased with, the first ever beer brewed at Hoyne Brewing by the “Young Lions”. It’s selling so well that that batch is almost gone. And the beer, as I might have guessed, is a lovely subtle Belgian-style IPA with plenty of hops.

And now finally we get to the main story. Sean’s passion for all things’ beer includes the whole beer culture and community. While Sean was brewing at Canoe Brewpub one of the servers, Ram McAllister took a great interest in what was going on in the brewery, and helped Sean whenever he could. When Hoyne Brewing was being built six years ago, Ram was there helping set up the equipment. Sean leased-to-purchase the 10-barrel brew house from the defunct Hugo’s brewpub. This was a Newlands system and worked really well during start up. However, as Hoyne Brewing’s sales took off it became obvious it was too small so he replaced it with a new Specific Mechanical 35-barrel system. Since Sean now owned the Hugo’s brew house, he put it into storage.

Ram meanwhile had moved to Ontario and eventually enrolled in the two-year Brewmaster and Brewery Operations Management program at Niagara College. After he finished his schooling Ram found it hard to find a good job. So he and a classmate drew up a business plan and found a couple of partners. They planned to open The Fairweather Brewing Company in Hamilton, Ontario. Sean Hoyne heard about this, and as he says, “I believe in paying it forward. People have helped me and I want to do the same for others.” Sean made Ram and the partners an offer: “If you want to start up your own brewery, I have the equipment for it.” So Sean shipped the brewery to Hamilton and sent one of his assistant brewers to reassemble it and get it running again. Last May the first batches hit the streets to great acclaim. They are an ambitious brewery and currently they are brewing saisons, a Grisette, kettle sours, and an IPA. Sean is so proud of what Ram is doing. “He’s got the passion to make great beer,” says Sean, “He’s got his head in the game.” And so has Sean Hoyne. Enough to give a brewery to a friend!