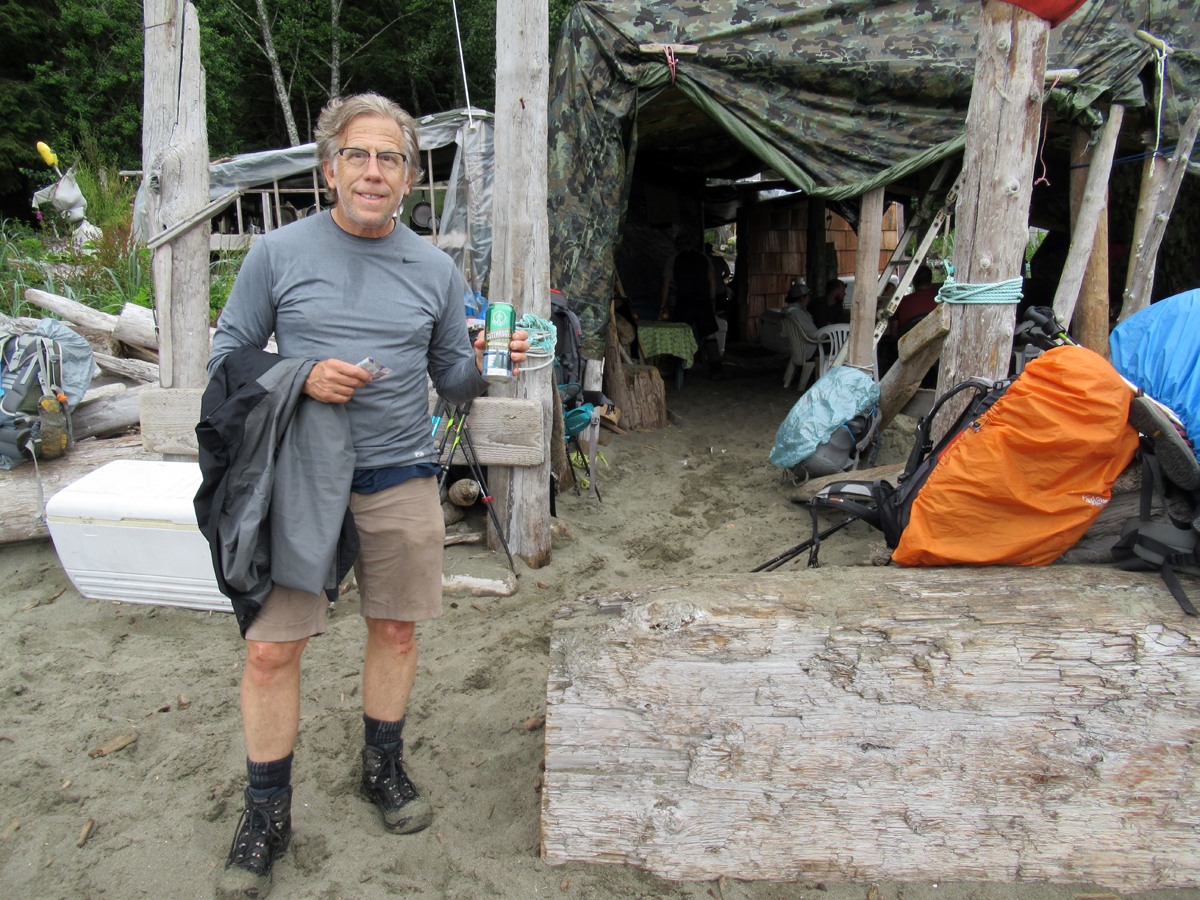 Photo: Where to get Pale Ale on the West Coast Trail. Note white cooler. Man holding Cutthroat is NOT J. Random.

I am always delighted when I hear of a new craft brewery opening up in one of BC’s smaller towns, confirming another place I can go without fearing poor choice in my favourite tipple. Presumably, they would not be opening a craft brewery without being sure of the market, likely based on existing consumption of craft beers from the cities or, increasingly, other small towns. However, I am wondering of our readers can beat my tale of possibly the remotest establishment where you can currently buy and consume craft beer in BC.

My memories from 23 years ago of the Port Renfrew Pub, at the Southern end of The West Coast Trail, were pretty hazy, but I could have sworn it was a low-ceilinged smoky dive with cheap rooms for loggers, fisherman and hikers upstairs, and a poor choice of beer. Entering the two-storey high, open-plan room, and looking up at where the rooms used to be, I had a nasty feeling of ‘jamias vu’. I was reassured by our waitress relating that the original 1927 building burned down in 2003 and was rebuilt in the original style on the outside. My next surprise was the rather good selection of craft beer from Red Arrow Brewery in Duncan and R&B Brewing in Vancouver. The Red Arrow Midnight Umber Ale was very much to my taste.

As an aside, I am calling an immediate halt to the establishment of any new craft breweries starting with the word red. We already have Red Racer, Red Truck, Red Collar and Red Arrow and I believe that is quite sufficient for one province.

Oh, sorry. You were think my story was focused on the Port Renfrew Pub, just because there is no cell phone service. No, no no! A tad further out than that. From downtown Vancouver, a 0.5 hour drive, 1.75 hour ferry ride, and a 2.5 hour drive gets you to Port Renfrew. Another 0.25 hour drive, 5 minute boat ride, and 3.5 days of backpacking the roughest, rootiest, muddiest, blow-down-filled stretch of trail I have ever encountered is needed to reach Monique’s at the North end of Carmanah Beach.

A 27-year old institution on the West Coast Trail, Monique, a Quebec Metis, started serving burgers off a propane barbeque and beers from a cooler only four years before I encountered her small tent, quite unexpectedly, while trogging North along the beach loaded down by an old canvas external-frame backpack. She got away with doing this inside a National Park by virtue of operating on a reserve of the Dididaht First Nation. She married into the band. I believe the supplies were originally trucked in on an old logging road to the edge of the narrow coastal park then hand-bunked along a trail to the reserve. These days, supplies are brought in by boat, weather permitting.

The modern, and much more famous, Chez Monique’s boasts several tents, an industrious kitchen, with a staff, multiple coolers, racks of drinks and an array of covered tables and chairs where you can relax and enjoy the same great burgers. I am not entirely sure they would taste so great if you have not been living off powerbars and dehydrated food cooked over a tiny stove for the last 3.5 days. Not to mention putting yourself through the nasty half of one of the “10 or 25 most dangerous hike in the world”. Fortunately, the beers have changed. In 1994, the least-worst available was Heineken but, just because it was there, we bought two cans and drank them at Cribs Creek campsite. This time, the selection was substantially better with several offerings from Stanley Park Brewery and Tree Brewing, in addition to the standard Kokanee, Molson Canadian and Budweister. Tree Cutthroat NorthWest Pale Ale went down very nicely I must say. This was for medicinal purposes only, you understand. Filtered or chlorine-dioxide-treated creek water was not doing a good enough job of washing the sand and silt out of our throats.

So, anybody able to beat that – packing in your own cans and cooling them in a creek does not count?

J. Random
J. Random has been penning the Ullage & Spillage column for What's Brewing since 2003.