Because we’re two people who base all our getaways around craft beer, each holiday planning session starts with the basic premise that we need to find places to go that we haven’t before. We typically have an idea in advance, based on the number of “we really need to go to” mentions that a particular destination happens to invoke during the previous vacation. (Foreshadowing: we really need to get back to Bend OR next year).

Last year, we conducted a really comprehensive tour of the Okanagan and Interior that we documented in a giant 3-part series called Staycation BC. At that point, we had been to most regions of BC for beer. This time we planned to cover the final frontier: Northern BC, home to a string of pearls along Yellowhead Highway 16.

Circumstances got in the way of our original plan, which was to cover all of the North. It began with wildfires, which almost eliminated the whole trip, then personal matters conspired to make 2017 the first year of this century without a full-on BeerSeekers summer jaunt. Nevertheless, we resolved to visit at least a few breweries we hadn’t covered yet, and made the tough decision to cut a couple: Terrace’s Sherwood Mountain and Prince Rupert’s Wheelhouse Brewing. The consolation is that there are brewhouses slated for Smithers and Fort St. John within the year, so we’ll still have a reason to come back and finish the job.

Kamloops is gearing up to become a craft beer destination. Along with Noble Pig, a well-established brewpub, and the redoubtable Red Collar Brewing, there is a new kid on the block. Iron Road opened their doors on Wednesday, August 2nd (only one month behind original plan!). As luck would have it, the BeerSeekers rolled into town the very next day.

The brewery is located a little outside of downtown, across from the Thompson Rivers University campus.

Owners Richard Phillips and Jared Tarswell are both geologists who were looking for a change of pace and wanted to start a small business together. The laid-back, outdoorsy, and affordable lifestyle in Kamloops drew them to the town. They relate that Kamloops is often considered to be wine territory, but people here really know their beer and have been very supportive of small local businesses like theirs.

Head Brewer Aaron MacInnis, formerly of Main Street Brewing, has crafted five recipes to get things started. The lager, pale ale and IPA are projected to be the mainstays, while the summer ale and farmhouse ale are the current seasonals. In case you’re hungry, their kitchen specializes in light fare with a Mexican theme including various tacos. On the evening that we visited, the tasting room was jammed with happy patrons enjoying their first tastes of what this new brewery had to offer. With plans for a grand opening sometime in early September, Iron Road is ready to join the craft beer community in Kamloops.

For more on Red Collar, see our 2016 coverage here.

Big Horn Hops, formerly Hops Canada, has undergone a change in ownership and management over the past year. We met up with Ian, who has been here since its start in the spring of 2015, and spent some time chatting with him about the operation. You can read all about the current ownership in this magazine’s Harvest Issue Hops Spotlight Q&A with Ian.

The hop yard has 137 acres of growing space. The hop plants wind their way up 7,000 wooden posts that were all hand-set by Ian and a small team of helpers. They grow 20 varieties of hops, the main ones being the three Cs: Cascade, Centennial and Chinook. They also import and broker hop varieties from the USA. The company is constructing a processing building on the property that should be ready by harvest time this year.

A few hours’ drive northeast of Kamloops on scenic Highway 5, and just an hour west of Jasper, the small community of Valemount nestles in a valley surrounded by three beautiful and majestic mountain peaks. There you will find Three Ranges Brewing, owned by the engaging and hospitable Michael Lewis. A Texan by birth, Michael is also a homebrewer and a retired military helicopter pilot. Asked what brought him to Canada, Michael smiled shyly and replied, “a girl…” Michael and his wife Rundi met while he was stationed in the Pacific Northwest. One thing led to another, and they ended up as co-owners (with Michael, as head brewer) of this beloved little brewery.

BeerSeekers luck was evident again; we were right on time for a rare Friday cask night. The night’s creation was a hibiscus blonde ale, complete with a Hawaiian lei on the cask. It was pink, light, and delicious (the beer, that is. The lei probably was too). The other bit of timing that Friday: it was assistant brewer Clayton Gee’s 50th birthday! We had a great timing hanging out with them and closing the place down.

The Three Ranges tap list includes four mainstays and a number of rotating seasonals, so there is something for every palate. Like many craft breweries, Three Ranges is a huge supporter of the community and believes in giving back, and Michael and Clayton are both former military men. As a result, every week ends with RED Friday (a military abbreviation for Remember Everyone Deployed). All the staff wear red shirts (again, the luck: we both happened to show up wearing red) and the proceeds from the day’s sales of Sacrifice Ale (and the contents of the tip jar, which the brewery matches) go to Communities for Veterans. In June, Michael and Three Ranges presented the first annual VALEmount Craft Beer Experience festival and fundraiser, an amazing success that has raised $25,000 for charity. 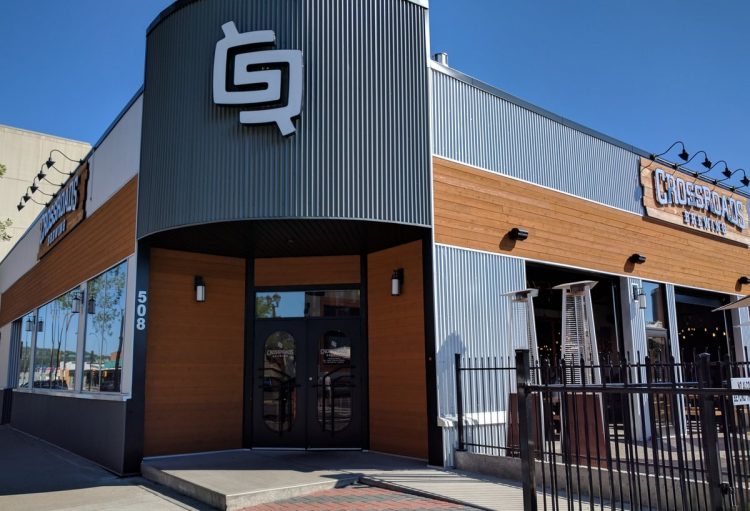 Crossroads is a beautiful brewery and tasting room rebuilt in place of an old car dealership building in downtown PG. It opened in March, but the easy atmosphere and smooth-running operation makes you think that it’s been around much longer. We met with local physician and co-owner Daryl Leiski, who showed us around the place with justified pride.

Crossroads boasts an extensive food menu including mouth-watering pizza made in a wood-fired Italian oven. An extensive beer list (nine beers on tap during our visit) ensures that there is a beverage for everyone. They are also beginning to package their product, so you may be lucky enough to find a can at your local liquor store one day.

The last (planned) day on this brewery tour began in the city of Quesnel, home to Barkerville Brewing. We toured the back with Head Brewer Erin Dale. Erin is a local who, upon hearing there was a brewery opening in town, became determined to work there. Find out more in this issue’s Women In Beer spotlight by Lundy Dale (no relation!). The beer samples we had at the brewery, and at a couple of pubs around the area, were of a consistently high quality.

General Manager Justine Pelletier has a background in manufacturing and keeps the place running smoothly. We also met camera-shy Retail Manager Ashley Pooley running the tasting room, which was tidy, well-appointed and dog-friendly. Some of the team members are company shareholders–and they’re fully invested in the brewery emotionally as well. We’ve all cried at work at least once”, Erin says.

A visit to the area is incomplete without a stop in the historic town of Barkerville, an hour’s drive east of Quesnel. When we made the trip there, Beer Seekers luck came into play yet again, as there was a major arts festival (ArtsWells) underway in nearby Wells BC that weekend.

On Highway 97 you’ll find 100 Mile House, home to another new craft brewery. Jackson’s Social Club and Brewhouse, owned by local entrepreneur Keith Jackson, arose from the barely-warm ashes of 2016’s Broke’n’Rode Brewing Co. Keith bought the place in November 2016 and got straight to work applying for licenses and getting ready to brew some beer. With a small but welcoming car-themed tasting room and patio, Jackson’s qualifies as a nano-brewery. They have five beers on tap, plus wine, cider, and a small menu of snacks. The brewery also boasts an on-site coffee bar.

The sense of community that is always present in craft brewing was evident with these northern breweries. Being far away from the Lower Mainland or the Okanagan, they have worked to create their own northern hub, manifesting itself in a travelling beer festival with the working name of the High 5 Craft Beer Tour. Aside from Three Ranges, Crossroads and Barkerville, the “High Five” are Wheelhouse Brewing of Prince Rupert, and Terrace’s Sherwood Mountain, who all poured beer at a set of Northern BC events along Highway 16 in mid-September. See the High 5 Craft Beer Tour Facebook page.

Thankful to be back

After our northern getaway, we were fully beered out and ready to head home. Thanks to one remaining wildfire closure on Highway 97, we had to take a significant detour back to Kamloops. Delayed by a horrific accident on Highway 24–one of a few instances of road carnage we came across on this trip–we had to make an unplanned stopover that night. As we pulled into our emergency motel, we were thankful that we weren’t amongst the road casualties, and that we only had to wait an extra day to get home–unlike some of the wildfire evacuees in the summer of 2017. For more on that, see our sidebar story Smoked Out: A Summer Of Fire.