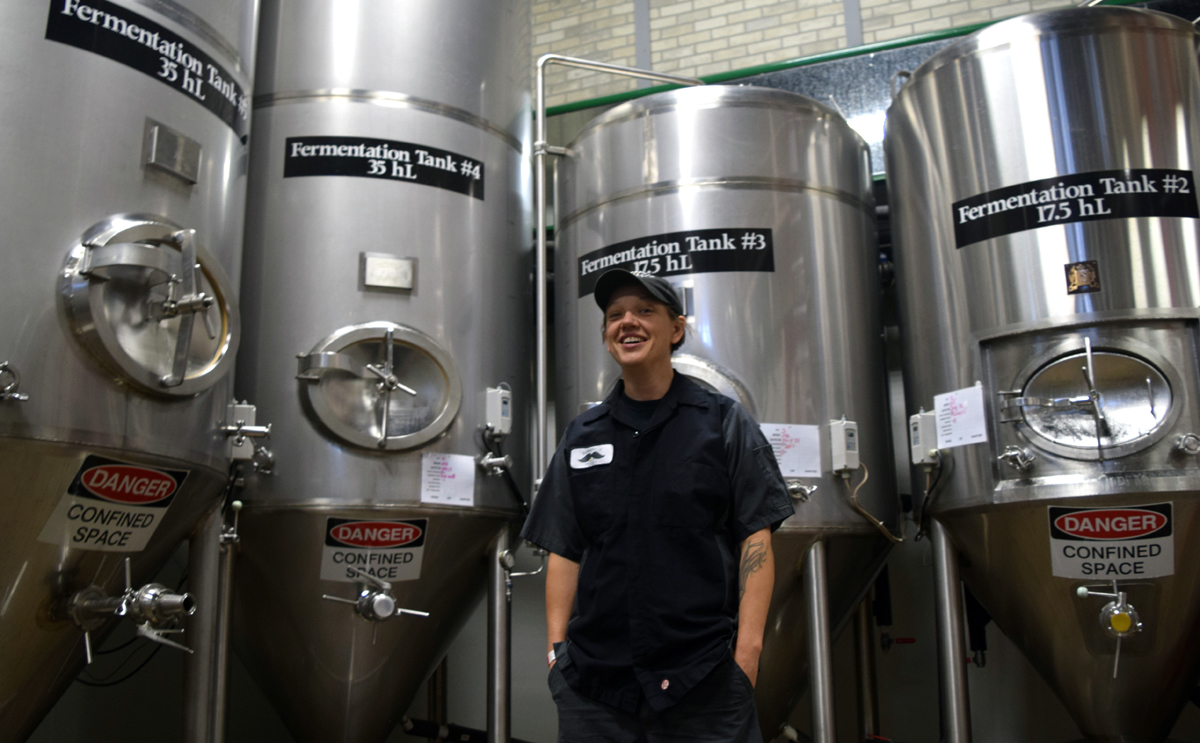 The Barkerville Brewing Co is one of our BC breweries steeped in history. It was originally built and opened in Barkerville in 1865 by an Italian immigrant, Nicolas Cunio. During the gold rush period, their natural spring water beer was popular and available at the local fairs. But two fires within a 20-year period forced a final closure. Now just over 150 years later, it has been re-established but now situated in picturesque Quesnel, BC.

I have been interviewing women in the beer industry for almost 5 years. Many I meet by fluke when I am at an event, or going on a brewery tour, and we strike up a friendship. Erin Dale, head brewer of Barkerville is unique in this as I have not even met her, or even been to the brewery. We have been “connected” by Dave Smith, Editor and publisher of What’s Brewing. I am looking forward to meeting her in the near future, but until then, lets get to know a bit more about her together!

How long have you been in the position?

I have been the head brewer, which sounds funny because we only have one, since October of last year, (not long) and I’ve been at the brewery since the week we opened, so three and a half years.

What brought you into the industry?

I was working in the bush for a very long time and trying to get out. Someone in town told me that a brewery was going to open, and I decided that I was going to work there. Luckily for me it actually happened.

What brought you to this specific choice? Did you choose the job? Or did the job choose you?

I think a bit of both. Before the brewery was pouring beer we were open for merchandise sales. I found out what job opportunities were available, and geared my cover letter for those, and it worked!

What were you doing before?

I tree planted for fifteen years and did some other brushwork as well. I’ve dabbled in construction and lots of other things in the winters. All of those other things have served me well in the brewery- carpentry, plumbing etc.

It seems that people THAT get into the microbrewery business have passion-how did you discover your passion for beer?

I’ve always liked beer. I used to think I was a picky beer drinker before working here (I probably wasn’t that picky). I think having a hand in something fosters passion. Knowing how much work, and how careful and intentional people are every step of the way really makes me appreciate beer a lot more than I did before working at a brewery.

Do you feel respected in your role?

How do you feel about being a minority female presence?

I don’t really think it’s a big deal. Among other brewers and people in the industry I feel like it’s a non-issue. When dealing with the public and shippers it’s just like everywhere else in life-the driver shows up and looks for a guy-any guy-to unload the truck. And then the next week time they look for me.

Are there advantages of being a woman in the industry?

It’s a bit of a novelty, especially here in the North. Ours sales manager Nolan was at an event in the spring and he said he had multiple people came up and asked about it being all women at our brewery. (It’s not all women, just mostly)

Are there disadvantages of being a woman in the industry?

I guess I don’t know. It’s kind of like being short. If you are short (I am) then you’ve always been short and you deal with it. I don’t know what it’s like to be tall.

What do you love about your job and the industry?

I love that there is so, so much to learn. I could read about beer forever and never know it all. I love that there are so many cool and new/old things being experimented with. Old techniques with new twists. Still beer? sours, zero IBU IPAs. So many fun things that stretch my ideas about beer. I love that everyone I’ve met in the industry is willing to share their and knowledge and experiences. I love talking with other brewers. Everyone does things differently, and we all make beer!

I also really appreciate that I feel good about what I spend my time doing to make a living. I think beer is a good thing to put into the world.

What do you hope to get out of this job?

I think I have it already. I feel challenged and engaged. Some days and weeks are very stressful, but I really like everyone I work with, and I like what I spend my time doing. I feel very fortunate.

How were you trained?

Troy Rudolph was the original brewer, and he taught me how to brew. I didn’t brew a lot when he was here, but I guess enough to get by. We hired Bill Herdman to come in as a consultant when I took over. He came up for a week and analyzed how I was doing things. He suggested some changes and I’ve more changes have evolved as I’ve learned more. I feel like I’ve learned things just talking to the other brewers up here as well. I took the General Certificate in Brewing through IBD this past year, and I’m going to continue on with the Diploma program.

What is your favourite beer of the brewery and why?

18 Karat. It’s a mildly hop forward amber coloured ale. I think it’s well-balanced and very drinkable and 5%. I like to be able to drink a few beers. It was also our first beer, which unfortunately alienated a lot of people in Quesnel, but it won a CBA our first year, so it kind of put us on the map a bit too. It’s a conundrum, that beer.

What is your favourite beer outside of your brewery and why?

The Mild from Red Collar. I pretty much love every beer of theirs that I’ve tried, but the Mild started it for me. So much flavour and body. Chocolatey delicious and under 3.5%?!? Amazing, how does he do it?

Favourite female in the industry?

Justine! She’s the only woman that I’ve known in the industry until recently, when we hired our retail manager, Ashley, who’s been a game changer for our business and a joy to be around.

Justine is our anchor! Justine was in charge of the storefront until recently, as well as financials, payroll, LDB, chasing down missing shipments, so many things I don’t have the slightest clue about, she’s bottled, canned and unloaded trucks with the forklift.

Besides all of that, she is the glue that keeps us all together. Both Nolan (sales) and I are very passionate and emotional people who don’t always have the same ideas. Justine is the person who gets us to take a deep breath and focus.

Quite honestly, Russ, our main owner, took a huge chance by hiring me for this position. A year ago I was our cellar tech. I’d hardly ever brewed without Troy here. I wasn’t sure that I was going to be able to do this job, there were so many things I didn’t know (and still don’t), but I feel like I’ve learned a lot over that last 8 or 9 months, and I think that our continued growth shows that I haven’t failed, and that feels really huge.

On a side note: BC wildfire fundraiser

Barkerville Brewing started a fundraiser in 2017 for the wildfire evacuees in the Cariboo communities. $1 from each sale of every pint sold at the brewery during Summer/Fall 2017 was donated to the Red Cross BC Fires Appeal. As of late September 2017, over $1800 had been raised.