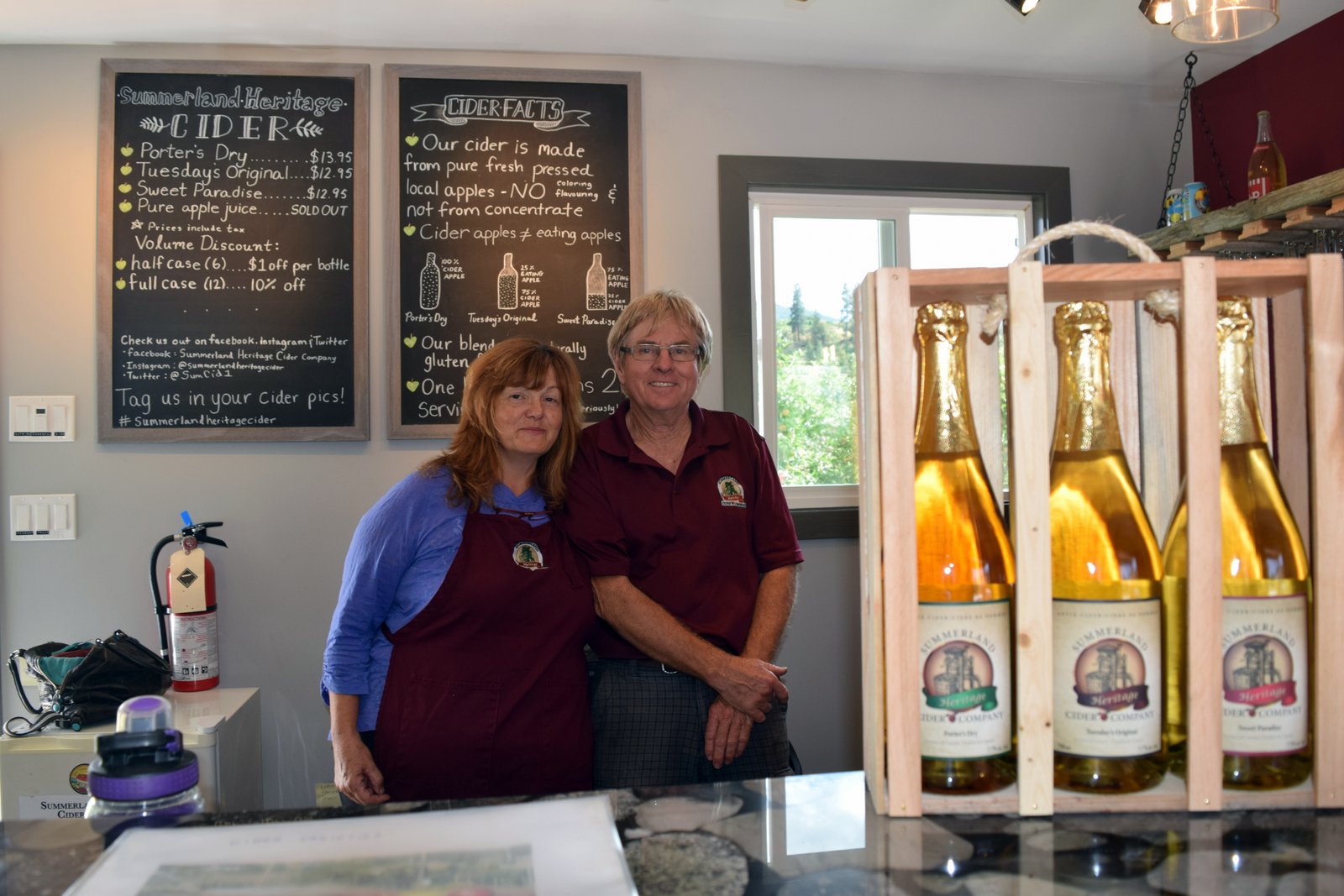 Five of BC’s orchard cideries talk about their businesses

As part of this special Harvest issue, the mighty WB is happy to spotlight BC’s craft cider industry once again.

But first: as we did in Fall 2016, we’ve reached out to a number of cider makers to learn what’s happening in their world. This time round, we’ve let a handful of them take the microphone to tell you more about themselves in their own words. Amongst the respondents who’ve participated, we have folks ranging from relative newcomer Fraser Valley Cider to Merridale, the granddaddy of them all.

All of the invited respondents happen to be members of (and a couple are leaders/founders of) the BC Farm Crafted Cider Association, which tells you that they are orchard-based businesses. There are also a number of craft cideries in BC that don’t own orchards (ie, they purchase 100% of the juice needed to make their cider). What’s Brewing supports the independent owners using either model, although it’s clear that the government doesn’t treat them equally. See last year’s story for more on that.

What drew you/your company into this industry?

I am a fifth-generation farmer, having inherited a sixty-year-old family orchard on Shuswap Lake. That, along with my taste for cider, eventually merged into a business idea about 15 years ago. I saw an opportunity to bring my family background together with my interests in environmental sustainability and community development.

I’ve always loved good cider—part of my youth growing up in the UK. On coming to Canada, we couldn’t really find a great cider. As I was having my mid-life career crisis, I happened to be visiting a beautiful orchard cidery and thought to myself “maybe Vancouver is ready for one of these”.

I purchased an ALR farm property which used to be a dairy farm. After extensive research, I realized that an orchard and cidery would be a great fit for both my business life and for the community.

The original three orchardists that started the company were looking to add value to existing agricultural land, and starting a cidery was a good way to do it.

Coming from professional backgrounds, we were looking for a business that we could do together and a lifestyle change. When we found the property at Merridale, we thought, “perfect; how hard can it be”. Then we discovered that our newly-chosen path was a seven-day-a-week lifestyle, and much more difficult than originally anticipated! However, 18 years later, we’re still a family-run company and passionate about what we do.

How much of your product do you grow yourself? Is your acreage owned by your company, or is it a cooperative / arrangement with other farmers?

MC&D:
We own the farm where it all started!

The apples are the most important ingredient in our cider, so we aim to ensure that all the apples are ours or specifically grown for us. We grow English and French cider apples; the other apples we use, come mostly from farmers growing for us with grafted cuttings from our trees. We work with farmers in different areas of BC, but our best apples come from here in the Cowichan. The growing climate in this area is perfect for cider apples.

SHCC:
We grow about 90% of our apples (all our own cider varieties) on orchards owned by the original three farmers who founded our company. We supply additional cider apples to other craft cideries within BC.

TCCC:
About 90% of my apples come from orchards I own or lease. The best I can hope for is about 30% from my own land near Victoria, which in its 4th/5th year of growing; farmland is too expensive on the Island to rely 100% on one’s own land. My main orchard is in Kelowna, which is a lease.

FVCC:
We have a 12-acre site of which four acres are planted with 1500 trees representing 27 different varieties of heritage cider apple. Our goal is to produce at least 25% of the apples we need on our own site, but our trees won’t be in full production for another couple of years so we also lease an orchard in Kelowna.

We’ve expanded to work with several other farmers over our past couple of seasons and we feel good that by buying directly from them we can offer them a fair price for all the hard work they put into their fruit.

SCFC:
Most of our product is made either from apples we grow ourselves, or from specific varietals grown for us. Some of our ciders, such as Bittersweet, are 100% estate-grown. Other ciders, such as Wild English, Pippins and Rumrunner, use a combination of our apples and those grown for us under long term grower agreements. One exception is Kings & Spies, which is a “crowd sourced” cider we’ve been making for over a decade using apples sourced from the Greater Victoria community.

We grow the apples we need, and we think it’s important to do business with other organic BC orchardists. Working together we have been able to build the certified organic cider apple supply in BC.

ABOUT THE BC INDUSTRY

Cider seems like the product that is perennially about to “break through”. Do you think BC craft cider has gone mainstream yet?

SHCC:
We don’t think the market has gone fully mainstream yet; there is definitely room for growth.

FVCC:
I think we are a long way away from mainstream. It’s like the craft beer scene of 10 years ago right now. At the farmer’s markets, a lot of our customers do not even know what cider is and even those that are familiar with cider as a concept have never tasted an authentic, full juice, craft made cider. All the time we get “I don’t really like cider but I do like this one”. Progressive liquor stores are starting to seek out a range of locally produced craft ciders, so I think the industry will take off.

MC&D:
I would not call it mainstream, but given so many of the large companies have jumped on the cider wagon, I would say that it’s getting close. I think there is tremendous growth potential. There are so many interesting things one can create with cider, so many different blends with beer, spirits, and even wine.

TCCC:
It’s still a growing market. One of the challenges is: differentiating farm-crafted cider (orchardists who make cider) and commercial-style cider (large scale cider production with purchased apple juice). Both are excellent choices for cider, and the market is happy to buy both. I think we have a few more years of consumer education, with more small-scale cideries opening, to help expand the ‘craft’ cider market.

SCFC:
Cider awareness is approaching “mainstream”, although—similar to craft beer—craft cider only accounts for a minor share of the total volume of cider available in BC.

We are mindful of this competitive cider environment, and so we helped found the BC Farm Crafted Cider Association, whose members are all farm-based cideries growing their own apples for cider. I think we can all benefit from working together as an industry to promote BC cider. We grow the best apples in the world, and have shown the world that we can produce some of the best cider as well.

Last Fall What’s Brewing ran a story about the state of cider regulations in BC. It seems like not much has changed in the past year. Is there anything you’d like improved about the way Victoria handles markup, taxation and administration?

MC&D:
Not much has changed in the last year. The main issues that need attention going forward relate to access to consumers. Grocery stores will always prefer the high volume lowered priced SKU’s if given the opportunity, and consumers like the convenience of the ‘one stop shopping’. Because most of us are small niche producers with more intimate distribution chains, we need some assistance to ensure that retailers avoid favouring the large commercial cider companies.

FVCC:
Obtaining my licence was not onerous. But, I do wonder about the complexity of the operating system. There are so many rules about how much cider we can serve for a tasting, where we can serve it, what we can charge for it, how we can operate our space in terms of providing snacks or entertainment or even a second glass of cider! I would like to think that as long as we are being responsible businesses, serving our clients safely and not disturbing our neighbours, the government shouldn’t be getting too involved.

TCCC:
I’m pretty happy with the LDB and liquor licensing setup, and personally don’t have any requests for improvement. As the President of the BC Farm Crafted Cider Association, I know that the majority of our members are also fairly happy with the current status, and are not in favour of any changes to the land-based cidery license structure.

SCFC:
The regulatory environment is evolving, but I think it’s important for them to recognize the importance of BC’s farm-based cideries and their contribution to BC’s cider industry and agricultural economy—as well as the overall authenticity and quality of BC craft cider. I hope they will always support those tenets.

MC&D:
It’s more like wine. No, maybe beer. No, make that wine. Actually, it draws the best from each. It can be cold refreshing and quaffable like beer, but without the glutens or the bloating. It can be full of body and tannins and very food-friendly like wine. It is best when fermented slowly at lower temperatures and sometimes even aged, as a wine. But it is lower alcohol and often carbonated to make it enjoyable in multiple pints!

FVCC:
Definitely more like wine! The process is the same and the resulting cider can taste like a fine champagne if done right. Did you know: the English originally invented the “methode champaignoise” to produce their cider and perry in the 1600s. The French saw it, thought it was a great idea and look what they’ve done with it!

SCFC:
Cider deserves its own place on the shelf! Finer than beer, more robust than wine, I think cider offers a contrast to both that makes it unique and awesome in its own right.

TCCC:
Cider is like cider. Its made like wine, drank like beer, and is really like neither. I think it’s time that cider is recognized for what it is, another level of fabulous beverages for adults to enjoy.

But in the interest of fun, I think cider can be grouped with beer more than wine. My basis for that theory: bigger lineups for cider at beer festivals than wine festivals :)

Brewtiful BC: Cider Saved Our Farm