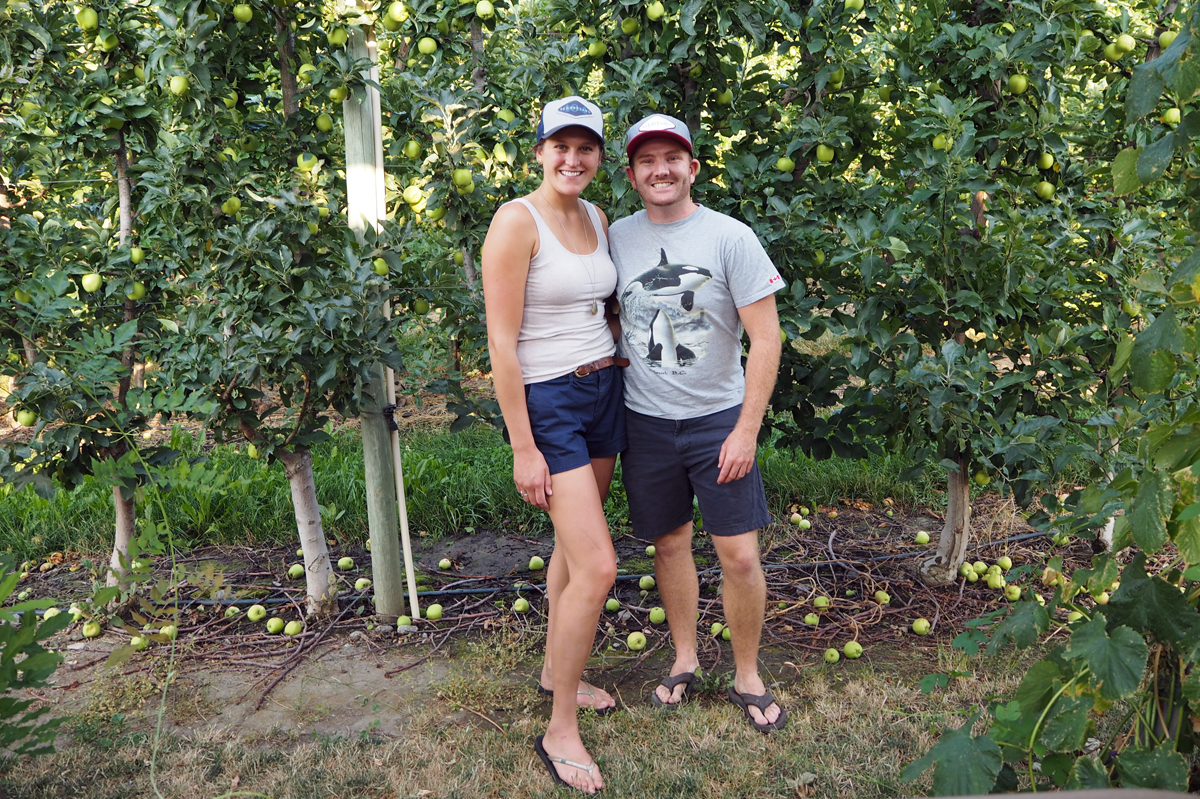 CIDER SAVED OUR FARM:
the Growth of Orchard Cideries in BC

Like many people of my generation, my first introduction to cider was the kind that came in two-litre bottles of syrupy, fizzy, boozy stuff. The equivalent of macro beer, its relation to fruit was all but obliterated by artificial flavours, colours, and sweeteners. There was zero relation to the authentic cider that had existed in Europe for centuries and had a longstanding history in North America as well. Not long after trading in my Lucky Lager for the new wave of craft beers, I remember being introduced to the delightfully dry, tannic and tart golden liquid that was Merridale’s Scrumpy Cider. It was a revelation. After returning to the Okanagan Valley I would beg Island friends to bring cases of Merridale when they visited as it wasn’t distributed beyond the Lower Mainland at that time.

Flash forward 10 years and you’d have to be living under a rock not to have noticed the apple infiltration at craft beverage events, liquor store shelves and even farmer’s markets. Roughly 30 cideries are currently operating in the Province, with more slated to open in the next year. Similar to the beer industry, as craft cider grows in popularity there is increased pressure from both producers and consumers to define what that term means. Embraced by the craft beer community with roots in the wine and orcharding industries; the growing cider industry in BC is challenged by the lack of a clear definition as its own distinct genre.

Cider can be made from different varieties of apples, but must contain 90% apple juice in order to be labelled as cider. Fruit additions can make up the remaining 10%. While technically a hard cider can be produced from water, apple concentrate, sugar and yeast, the prevailing definition of craft cider is produced from fresh-pressed juice with minimal additives. Organic cider takes this definition even further and uses pasteurization instead of chemicals to kill off any bacteria or wild yeasts in the juice before fermentation, with yeast being the only non-fruit addition.

We only see one category of apple in the grocery store – sweet apples which have been cultivated as fresh eating or cooking apples. In addition to these, there are three further classifications used in cider production: bittersweets, sharps and bittersharps. Centuries of cider production in Europe let to the development of varieties prized for their tannic and acid profiles, such as Yarlington Mill, Winesap and Porter’s Perfection. Cider can be made from a single varietal or a blend of apples from any of the four categories in order to come up with endless variations on flavour, aroma, sweetness and acidity.

The legend of Johnny Appleseed is familiar to many, however, Johnny was planting cider apples, not eating apples as he journeyed westward across America. Cider production was an important tradition brought over to the new world, with immigrants establishing cider apple orchards from old-world stock. Cider made is possible to preserve the apple harvest without modern refrigeration techniques, and offered a safe alternative to contaminated drinking water sources. In the 1920s prohibition saw the destruction of many of these orchards across North America and the decline of this traditional beverage as a result. For more on cider’s history and production look for Cidercraft Magazine’s book, Tasting Cider, which gives a great overview of both traditional and modern cider production, as well as suggestions for recipes and cocktails using cider.

With names like Peachland and Summerland communities in the Okanagan Valley have a long history of tree fruit production. In the late 1990s competition from international orchards, consumer tastes and growing conditions caused fruit values to tank, impacting the livelihoods of many orchardist families. When my family bought an apple orchard in the early 2000’s, the value of apple production was so abysmal that like so many other orchards in the area it was torn out and replaced by grape vines, which were able to offer a much higher production value per acre due to the burgeoning local wine industry. A handful of visionaries in the late 00’s saw the potential for cider production, likely inspired by the resurgence of popularity of the beverage sweeping across the United States and Eastern Canada. In the Okanagan the pioneers of this movement were Twisted Hills Craft Cider in Cawston, BX Press Cidery & Orchard in Vernon and Summerland Heritage Cider in Summerland.

In Cawston under the shadow of Fairview Mountain lies the sprawling orchard estate where Jo Schneider’s family has been farming for generations. His father originally planted heritage cider apples in 2007 with the intention of selling the fruit to cider producers elsewhere. After meeting Kaylan Madeira a short time after the couple planted their own orchard nearby and Kaylan began experimenting with making cider as a way to add value and diversify their farm-based lifestyle.

Twisted Hills released their first cider in 2013, and has been a runaway success since that time, winning several awards. Kaylan says she’s grateful that they were given a hand up in learning about cider by some of the more experienced cider producers at the time, and found that the atmosphere of the industry is collaborative and inclusive. Now that she and Jo have mastered the art they have in turn been able to help mentor several of the newer start ups in orchard management and cider production. The family farm continues to provide juice to other cideries in BC, helping to fill the gap for a few farmers during the time between planting their own cider apples and having a large enough crop for production.

In Vernon the Dobernigg family has been operating their farm for three generations. Missy married Dave in the early 2000s, and after a few years they became concerned about their ability to continue to maintain their agricultural lifestyle based on fruit sales alone. After weighing different options, they chose cider as a way to add value without having to deviate from apple production. Like Kaylan and Jo in Cawston, Dave looks after the orchard side while Missy has taken on the role of the cidery.

The passion she has for cider shone through as Missy spoke about her journey to start a cidery. She spent her days looking after their 3 children (all under the age of 5 at the time) and her nights intently researching cider production methods. Family and friends helped with batch testing and once the core brands were figured out they released 6,000 litres in the first year which promptly sold out in 2.5 months. They have doubled production each year since, and will hold steady this year at 40,000 litres. Blending cider apples, dessert apples and crabapples has allowed BX Press to produce a variety of different styles, and they also have a line featuring botanical additions like lavender raspberry and cardamom blackcurrant.

Summerland Heritage Cider developed out of a project between three longtime orchardists, Bob, Ron and Tom,  who made cider as a way to use waste apples that did not meet the strict criteria for to be sold as eating apples. They wound up adding cider apples to their orchards to have a more complex flavour and soon they found their hobby creating such a good reputation for their cider that they decided to launch a commercial cidery. As they joined the game a bit later in life after a few years they began to look at taking a step back from the business. In 2016 Ron’s son, Ted Vollo, took over operations of the cidery, along with his girlfriend, Lauren Wilson. Both are geologists, and still work in that field while also overseeing operations at Summerland Heritage, with lots of help from the original trio.

Ted says that while he grew up on the family farm, he wasn’t that into the idea of farming having seen the difficulties that can be encountered during bad growing seasons and market fluctuations. As with Twisted Hills and BX Press, making cider allows them to carry on with the family farm while adding value to their products that will help ensure that they can maintain the family orchard for years to come. Lauren explains that they are also able to add their own spin to the original brand. They are both really into craft beer and she thinks this will help them market their product better to that demographic while maintaining their well established core ciders.

The Elephant in the Room

Most farm-based cideries are operating on a year-to-year basis, depending on hard work and their reputation to sell their products to the public. Being small-batch, artisan producers they have a love affair for their cider that is noticeable in the quality of their product. However, there are other brands of cider in production that are able to take advantage of shifts in the apple market and massive production methods that small producers can’t compete with. Labelling both products as craft cider does the consumer as well as the producer a disservice. The larger producer has a bigger marketing budget, as well as a lower production value, resulting in a widely available and less expensive product on market, sometimes taking shortcuts on quality as well. That doesn’t mean all non-farm-based cideries are operating with big budgets, there are some smaller urban cideries that are not able to take advantage of tax breaks offered to land-based cideries – such as being able to operate on ALR land – which creates a further rift in defining and protecting craft cider.

The BC Farm Crafted Cider Association represents 20 cideries in BC with the purpose of creating a united voice for land-based cider production. All of the cider producers I spoke with this summer stated that so far competition from new farm-based start-ups is not an issue. Ted and Lauren said that even in the relatively small community of Summerland, where they have recently been joined by Dominion and Nomad, they feel that they are all working different angles of the market and are supportive of each other. The main obstacles to success are finding a united voice against larger producers masquerading as craft, as well as educating the consumer – the stigma of alcho-pop remains strong.

The Future of Cider in BC

Kaylan felt that Twisted Hills designation as the only organic estate cidery in BC will help their brand stay strong despite any increased competition in the market. They, like BX Press and Summerland Heritage, have no issue selling out every year, for now the main challenge is staying on top of demand. Ted and Lauren are inspired by the local wine and beer industry and are planning farm tours where visitors can learn more about cider production and make on-site purchases, as well as participating in events around the province. Missy at BX Press is expanding the boundaries of cider, looking at playing with fermentation using beer yeasts, and even wild fermentation. While market saturation could be an issue at some point in the future, judging by the ingenuity across the cider market in North America with both the revival of traditional methods like Rose, Pommeau and Perry, as well as creative experimentation with additions of hops, botanicals and fermentation methods there remains a lot of room for further expansion in British Columbia as well.

So let’s raise a glass of the golden nectar in a toast to cider’s rich agricultural history as well as creating a new legacy for future generations of farming families!

Some more images from Chelsea: