Even beyond the obvious fact that a comic book has illustrations, there is something different about reading a comic book than reading a conventional prose book, even one that is photography or graphic heavy. The unique combination of text and illustrations in a comic book works differently, on a cognitive level, than say, The Illustrated Guide to Homebrewing or other picture heavy books. Rocco Versaci, for instance, In his book This Book Contains Graphic Language: Comics as Literature dissects how comics are read or viewed differently than either a film or a photograph. One obvious way that pertains to The Comic Book Story of Beer (hereafter abbreviated as CBSB) is that you can’t take a photograph of Shakespeare drinking an ale or the mythic goddess Ninkasi. However, the differences go even deeper than that. Scott McCloud, in his seminal work on graphic narrative Understanding Comics, argues that comics have both a unique grammar and a language all its own and that “words and pictures can combine to create effects that neither could create separately” (p153-155). McCloud also discusses how a simple illustration, like a smiley face, is more recognizable than a photo or a highly detailed illustration. He calls this process “amplification through simplification”, in which an artist isn’t “so much eliminating details as we are focusing on specific details” (p30). CBSB uses this exact technique in depicting yeast not realistically but as a cartoon tractor, emphasizing its industrious, hardworking nature in the fermentation process. If this is too theoretical for you an alternative way to look at it is that even the different way people learn might mean that reading a comic book about, for instance, the brewing process might help certain people retain better.

For a very long time both beer and comic books have suffered from fairly negative perceptions by the general public. Comic books are perceived as kid’s stuff, as having an “ephemeral, throwaway nature” (Gene Kannenberg Jr.,500 Essential Graphic Novels, p.6). Likewise, beer is often perceived as “nothing more than a throwaway consumer item” (CBSB p.6) and “beer drinkers have often been characterized as loutish and coarse” (CBSB p.25). However, in recent decades many pioneers of both products have pushed to change perceptions and to show the endless possibilities of both. Hennessey, Smith and McConnell use one, a comic book, to quite profoundly show the deep history and possibilities of the other, beer. 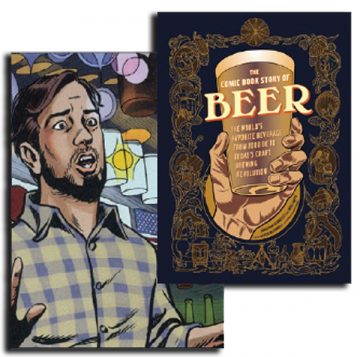 Can a comic book also be a history book? Larry Gonick’s popular and ground-breaking A Cartoon History of the Universe would probably be the standard answer to this question. But Gonick only refers to alcohol three times in the first volume and then only references beer once (the Sumerians liked beer). The CBSB addresses why this might be as they discuss the prejudice against beer by the intellectual elite, although I feel that Gonick’s subject matter was just too wide ranging to spend that much time on beer. All the more reason that a more focused book such as CBSB is necessary. Don’t assume that because a comic book has less text that it cannot be just as packed with information. The CBSB is surprisingly full of information I didn’t know or had forgotten, much of it visual. Even if some of the book is well known territory, it is always insightful how an author will integrate such history into the wider context or focus more closely on specific aspects. I was initially disappointed in the lack of a bibliography until I realised it is available online, again showing that although it is in a different medium, CBSB can be just as well researched as many other books on beer.

The most untenable positon would be to reject the popular prejudice of one product, say beer, as lacking in sophistication but still accept the incorrect assumptions regarding the other, such as comic books are only for kids. If you are guilty of either erroneous judgment than I urge you to overcome them and the CBSB might be a great place to start. After that there is whole worlds of endless possibilities in both beer and comic books to explore.