On International Women’s Day in 2015 a group of us from the BC Craft beer industry met up at Dogwood Brewing (not yet open at the time) to brew together for the first Pink Boots/Big Boots Brew. Claire Wilson, owner and head brewer of Dogwood was the host, and invited women of the BC beer community to work together on creating a red ale-based on a basic recipe provide by the Pink Boots Society. It was such a success and so rewarding for all the women involved (world wide) that it became an annual event.

Here we are in year three – and this years brew was hosted by Ashley Brooks, head brewer of Big Ridge Brewing (now working for Four Winds). And from Ashley… “It was great to come together with other local women in the industry with more experience than myself.in 2015 At the time I had a lot to learn.”

“I wanted to be a part of bringing everyone together to work, talk, and learn with each other, meet more women coming into the industry and form some strong bonds… I was inspired to teach and pass on my knowledge in the brewery as the women had done in my previous years.” 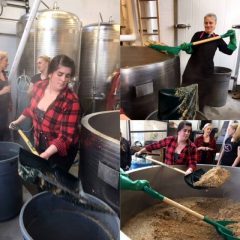 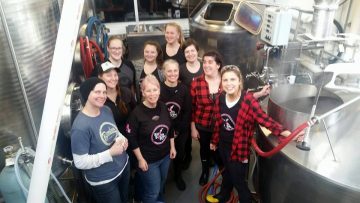 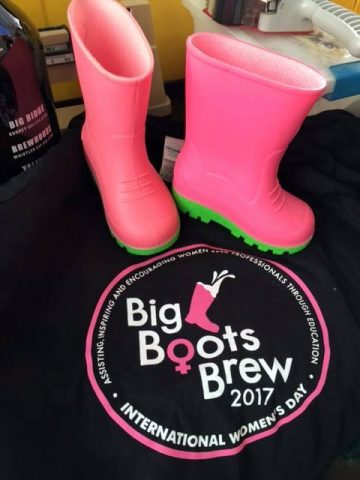 WHO / WHAT IS PINK BOOTS?

“We are the female movers and shakers in the beer industry. We get the beer brewed and fermented with the highest possible quality. We also own breweries, package the beer, design beers, serve beers, write about beer, and cover just about any aspect of beer, and we are all women. Most importantly, we teach each other what we know through our own seminar programs, and we help each other advance our beer careers by raising money for educational scholarships.” – Pink Boots Society

WHY ON INTERNATIONAL WOMEN’S DAY? WHAT IS BIG BOOTS BREW?

The official date for Big Boots Brew Day is always on March 8th, International Women’s Day, but due to work and life conflicts, the option of brewing near the date works too. Big Boots Brew Day was born from the Pink Boots Society members’ desire to take part in International Women’s Day to raise the profile of women in the beer industry and to raise the profile of beer to women. On Big Boots Brew Day, Pink Boots chapters, members, breweries, from around the world all get together, grab their pink boots, collect local ingredients and work collectively in a brew. And it is not just the brewers that attend, it is the owners, sales reps, the marketing and social media team, the production teams, the cellar workers, the students… Every woman in the brewing world is apart of this. Profits from Big Boots Brew Day get donated to the Pink Boots Society to help fund scholarships and educational opportunities.

WHAT IS THIS YEARS RECIPE? 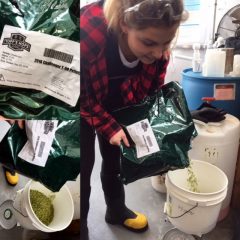 The beer recipe this year is an historical honey ale. It was inspired by Amy Newell – Large, brewer from Avery Brewing’s, a nice light, easy drinking ale perfect for the spring.

Every group works with the basic recipe provided and individualizes it with local ingredients. Ashley Brooks connected with the owner of Topp’s Hops from Abbotsford, one of the newer hop farms that grows and produces their own hops, who gladly donated the hops for this brew. As for the honey, she met the owner of GoldStrike who’s a regular at Big Ridge Brewing, now located in Lillooet where the conditions are better for the bees and produces fresh and organic honey.

WHERE CAN I GET SOME?

Big Ridge Brewing has the majority of the brew. $1 from the sale of each pint goes back to the Pink Boots Society. All participating breweries can also serve it in their taproom.

Are you a woman who studies or works in the beer industry?
Check out the Pink Boots Society, join up and be counted! For more information, check out the website: www.pinkbootssociety.org.