We continue to hit the trail, going to local, regional, and provincial beer events. What’s Brewing cares about the movement more than ever. We get a rush doing our thing; it’s always cool for whatsbrewing.ca. Of course, we’ve been in this beer movement from the beginning. Beer is and has always been social. Thanks for all the great comments on whatsbrewing.ca when you see us around in our yellow shirts. Look for our display at events, and come say hi!

We cover this event every year and over the years as beer has grown and so has the beer community and spirit in Port Alberni. To be honest a bigger festival could fly there.

Like just about everywhere they have their own brewery in the community which creates an outpouring of good beer knowledge. We notice it talking to locals. People are friendly and laughter and friendliness is an indicator of the pride of their movement in their community.

As at all smaller festivals, there is always a good medium cross section of craft breweries and enthusiastic people manning the booths. Great talking to all of you and tellin’ you about us at whatsbrewing.ca.

Part of getting to Port Alberni every year is the beautiful drive; going through the majestic Cathedral Grove and over and back the Hump. Good show Alberni Valley beer folks. We see new faces every year as the demographics change a bit.

This is one of BC’s premier and longest-lasting festivals. The people are overwhelming in their hospitality and community pride is everywhere. The event space is massive, filling inside and out a convention centre, and this year What’s Brewing had a booth set up and had quite a few of us in attendance from our team.

The music is phenomenal crossing many styles and genres; food trucks offering up fair priced and interesting foods. Yes ethnic food variety galore. There is never a hassle getting food or beer and everyone is full of extreme enthusiasm.

Penticton and all around has a good cross section in the beer movement from old hands like me to the youngest coming up. Lots of stories being told; passed on and learned all around. And beer and cider especially in that part of the province.

It’s a picture of seemingly unending varieties of craft beer and cider. These folks show it loud and clear. Welcome to Penticton; happy to see you.

After two days of intense beer partying; it must be said there is very little bad action by anyone. Thanks to all who said they knew us. We love being in the scene where it’s happening. 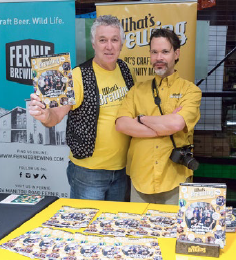 The Friday Brewers After Party

This is always a smash hit at Cannery Brewery. What a funky little jam up all around. Cannery family are pioneer friends to whatsbrewing.ca and have been since they’ve started. Thanks for having us for a very generous party at your house.

Part of the great experience for me is all the beer things on the road to the event itself. Most recent little beer discovery for me was Hedley General store; I have no words how sleepy Canada on Sunday morning this was, still knowledgeable owners can walk you through beer walk. In BC, even in the tiniest places good beer makes inroads. Breweries keep opening.

Saltspring has always had its very own craft brewery and a strong fresh and local craft beer scene.

People sell products from booths across the island (across the province for that matter) and the culture of supporting local has been alive here for decades.

I was invited by some of my friends to Salt Spring Wild Cider where a flight of offerings was waiting for our pleasure.

WB, which covers many cider events, was impressed at this local maker creating a cider culture for this thriving island. The traditional apple and pear ciders were just what was on order for a sunny sleepy day. The cider house cooler was full of all their offerings. We got the talk on all things cider and local folks would be well pleased by a visit here; with a very bucolic setting in which to take in the pleasures of the fermented fruit.