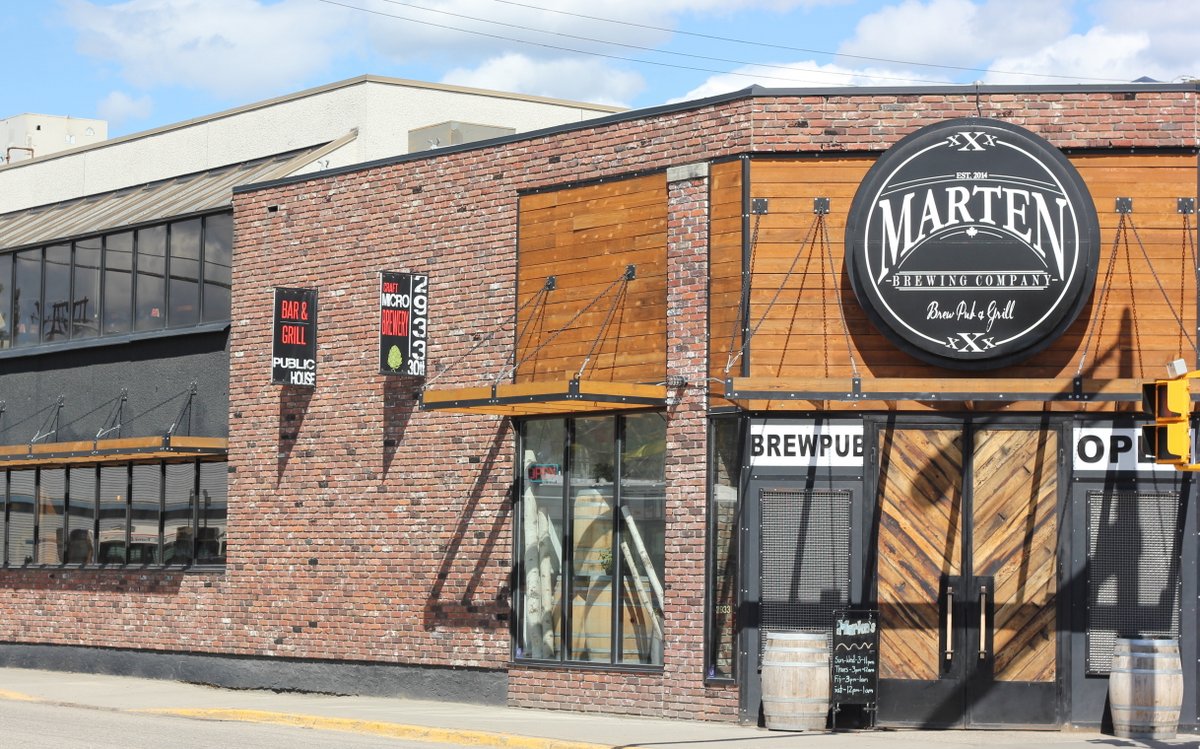 The South Okanagan has been my home for over a decade. While I’ve explored many iconic and hidden gems within the South and Central Okanagan, generally the furthest north I go is to the Kelowna airport.

When thinking about Vernon, what are your first thoughts? Until recently, for me it was lakes and golfing. Farms and ranches including the Historic O’Keefe Ranch. Mountain biking and skiing at SilverStar Mountain Resort. This all changed when I met Stefan and Pearl Marten from Marten Brewing at the 2016 Okanagan Fest of Ale. I enjoyed meeting them and in the months following, we had a number of conversations as they kept me updated on their news for my regular What’s Brewing column. They invited me to come meet them at the brewery and after months of trying to schedule a Vernon trip, my partner John and I finally set off on our Vernon adventure.

The drive into and around Vernon is gorgeous. We enjoyed breathtaking views of the lakes and rolling hills and we stopped for photos a few times along the way. We finally put our cameras away and drove to Marten Brewing. When we arrived, we discovered a welcoming corner building in a great location in downtown Vernon with entrances into both the Naked Pig BBQ and Marten Brewing.

We had lunch and a visit over a flight of beer while sitting at a table that they built by hand. While enjoying lunch, we observed people soaking up sunshine on the patio, couples and groups chatting over beers and BBQ delights, and solo visitors typing away on their keyboards while sipping on the Naked Pig Roast Coffee. The vibe at the Naked Pig side of the building is great. It’s super chill and very inviting for solo travellers, couples, groups and families.

The meal was outstanding. We were first treated to pork rinds with 4 different house-made BBQ sauces. As John and I often do in restaurants, we chose 2 meals that we could share. The beer mac and cheese with cornbread was delicious. The beer mac and cheese featured their Zephyr Hefeweizen, which I also happened to love in my glass. The cornbread was excellent with just a hint of sweetness. We also loved the pork sliders with coleslaw on a pretzel bun. The Naked Pig features beer from Marten Brewing, of course, including their nitro beer line, plus one guest tap.

Over this delicious lunch and refreshing flight of beers, we heard the history of this building and location. Before Stefan and Pearl bought the space, a variety of different nightclubs and restaurants operated in this location. It was known as “the cursed building” because nothing succeeded here. As Vernon residents for 11 years, they watched as one business after the other failed in that location. But they had a vision for a different future. Despite their vision, they were met with a lot of opposition. Many in the community expected them to fail. In fact, because of the line of failures in that location, they couldn’t even get a loan for the building.

The Marten Brewing side of the building is beautifully laid out over two floors, with most of the primary seating featuring a view of the brewing area. There are a variety of different settings, so whether you are looking for a seat at the bar, a booth, or a table overlooking the street and the brewhouse, there is something for everyone.

To help create that community hub they envisioned, they also have meeting rooms and they offer their space for conventions, Christmas parties, weddings, art nights, trivia nights, and lots of community events.

In terms of their craft beer vision, Stefan continued, “We created 5 flagship beers with drinkability in mind, beers with lots of flavour. We brought in long time friend Stefan Buhl, who had finished his role at Tree Brewing. He started as our brewmaster and mentor, to help us develop our first beers.”

Stefan explained, “For our flagship beers, we wanted beers that people could enjoy. But we also like experimenting. In our Pale Ale, we changed up the dry-hops and asked our guests for their feedback.” To continue their experimentation, they brought on Joe Strickland to the team as head brewer. “It was pretty exciting coming in from the beginning,” Joe mentioned to me.

Just how far have they come? Well they happened to be celebrating a major milestone the day that we were there. Joe took a break to let us know about the beer he was creating that day. The “Hundy”, so named because it happened to be their 100th brew! The Hundy is an Imperial IPA, 10% alc./vol. with 100 IBUs. I also got a peek at their brand new canning line. Plus, they assured me they have some big news coming in the months ahead.

So, have they rounded the corner and created a success? The crowd on both sides of the building would indicate that they have. Pearl explained, “We have built a really loyal following. And we believe we are on the right track. Vernon has embraced what we are doing. The community has embraced us.”

Pearl commented, “We have between 55-70 staff which really supports the community. This includes lots of jobs for youth, which has helped keep a number of younger families in Vernon.”

Pearl, Stefan, Joe and the entire team at Marten Brewing and the Naked Pig BBQ have a lot to be proud of. They have beaten the odds. They have become a hub in the community and they are supporting and contributing to the community that also supports them.

We left Stefan and Pearl well fed, refreshed and inspired by their vision and all they are doing in Vernon. It was the perfect state to be in as we traveled to our next destination in Vernon, the fabulous Sparkling Hill Resort, where we enjoyed two fabulous days and nights of R&R. We soaked in the gorgeous infinity pool overlooking breathtaking lake views, hiked the trails, read in comfy chairs in the tea room. And of course, we enjoyed every single moment of relaxation in the saunas. But that’s another story for another day.

This year, as Canada celebrates its 150th birthday, Vernon celebrates its 125th birthday. Put it on your bucket list to wish Vernon happy birthday in person. While you are there, be sure to stop in for some suds at Marten Brewing and some time relaxing in the saunas at Sparkling Hill Resort.

How Marten’s beer lineup got its German accent

Stefan and Pearl both hail from Williams Lake, but Stefan’s family has German roots, and that has influenced the development of Marten Brewing.

At the urging of a Canadian education system that mandated English learning, German was not spoken in the household when Stefan grew up. To learn Deutsche, he attended language classes, and as a young adult headed to Bavaria to work for a year and soak up the culture.

Stefan worked at a “huge beer garden in Munich, with a whole list of lagers.” He also spent time at a ski resort in the Alps. “Everybody drank Weizen there; even the kids”, he relates.

According to Stefan, “When you pour a Pilsner in Bavaria, with the perfect head and presentation, it takes about four minutes.”

Pearl, like Stefan, has a hospitality and bartending background. She already had a taste for lagers, especially Pilsners, but developed her palate even more after opening the Naked Pig.

The two of them think of their amazing hand-built facility as a brewer’s playground. There are typically 6 to 8 house brews on tap, plus a couple of guest taps. The core beers are German styles: Lunkhead Lager and Jefe Hefe(weizen).

Lager is often ignored by craft fans like us because it’s the drink we came to craft beer to get away from. But theirs is a lager from a brewery with German roots and sensibilities. We were stunned by it.

Marten is not just about German styles; they consistently also have their BC Bud IPA on regular and nitro taps. When we were there, brewer Joe had created a Session Rye Lager; currently they have Cookie Monster Stout on tap.

The brewery has the space and capacity to brew for a market beyond the Okanagan. They’d eventually like to be able to serve the Coast as well. We have a feeling their creations would be welcomed there.