I first met Diana McKenzie at the Central City Winter Cask Festival in January 2015. This was Callister Brewing’s first event, well before their opening, so there was plenty of excitement around their cask. When Diana and her partner Christopher Lay arrived together, it was Chris that everyone wanted to talk to and congratulate, and Diana took a step back. I don’t think that this is what she expected, as she came to the event as one half of the Callister team.

At any beer event I always scout around to meet the fellow women in the industry. I saw Diana a bit later and we chatted and bonded over the challenges of being a woman in the industry and I was really excited to learn more about the whole concept of Callister brewing and the work involved in making it happen.

Since then, I have had the opportunity to get to know Diana better and even asked her if she wanted to create her very first cask at one of my Pink Pints Women In Beer dinners. She did, and it was delicious! Here’s more about her. 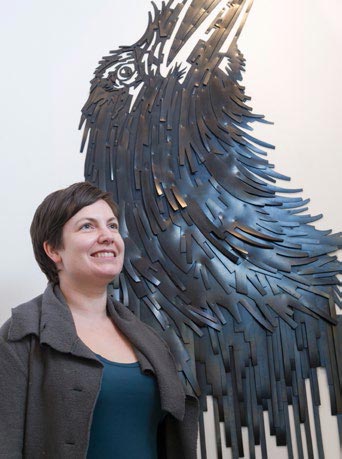 HOW LONG HAVE YOU BEEN IN YOUR POSITION?

WHAT ROLE DID YOU PLAY IN THE CONCEPT OF CALLISTER? WHAT ROLE DO YOU PLAY NOW?

I wrote the business plan and figured out how to make it happen. Now, I keep the business running behind the scenes mostly, but I also do some shifts in the tasting room on Saturdays and I make our sodas and tonics for our non-alcoholic and cocktail options.

HOW DO YOU FEEL ABOUT BEING A MINORITY FEMALE PRESENCE? DO YOU FEEL RESPECTED IN YOUR ROLE?

Mostly yes. It’s nice to stand out and immediately bond with other women over beer. People are sometimes a bit surprised when they find out that I’m one of the owners.

ARE THERE ADVANTAGES OR DISADVANTAGES OF BEING A WOMAN IN THE INDUSTRY?

I don’t think the industry presents any gender-based advantages or disadvantages. It’s a very inclusive community.

A love of beer, and a desire to build something that was our own.

I’ve been working in professional education for almost 10 years and I still work at UBC full-time. A few years ago, I was trying to decide what my next step would be, so I took the program in sustainable agriculture with the UBC Farm. I love growing vegetables and being outside but I didn’t feel like running my own farm business was for me. I still wanted to do something food-related and build a local business. I was trying all kinds of things like making my own cheese, growing mushrooms, and fermenting sodas. My partner Chris was keen on home brewing so we started there, got involved with Vanbrewers, and kept going.

The jobs we’ve had before weren’t really where we wanted to be. The people and the community in the beer industry confirmed that it was the right choice for us.

I used to tour the Okanagan wineries in the summer with my dad and we stopped in at Tree Brewing a couple times. I think that’s when I realized I actually liked beer because it was the only “craft” beer, outside of Germany, I’d ever had. More recently, the explosion of the craft beer scene really opened my eyes to all of the different styles and what is possible. By taking up home brewing, we started gaining an appreciation for the process, the subtleties and how complex it really is. I really love the variety and diversity and the creative possibilities.

We get to be creative and solve problems and do things our way. I also get to work alongside my amazing partner, Chris, and we even agree on things most of the time! We get to spend time with great people and make awesome beer in an incredible community. The people in our professional network have become personal friends so going to events is really fun because it means we get to catch up with everyone. Everyone is so supportive and helpful.

We’ve learned everything ourselves along the way, starting with home brewing and a massive amount of support from the brewing community (both professional and home brewers). I did a lot of things myself that people don’t expect – like incorporating our company or drafting our own legal agreements or brokering shipments – you just put your head down and go figure it out. We didn’t have a lot of money to hire other people so we just did everything, and we still do.

WHAT IS YOUR FAVOURITE BEER AT THE BREWERY, AND WHY?

Callister’s ‘Round 2 Rye Ale’ was actually the second beer Chris ever brewed and it remains one of my favourites. I love the rich spicy character of rye and the amount of hops made it almost an IPA, which balanced those notes with a bright bitter finish. My favourite brew that’s on right now is Callister’s ‘Resolution’, a dark saison with red currant juice. It has a beautiful deep colour and the fruit character is so bold and tart it’s almost like a sour.

Wow… so many to choose from. Bomber’s Red Rye IPA collab with Stone Brewing is near the top of my list – I wish they would bring it back. Also Doan’s Rye Stout. I like keeping it local and supporting friends.

FAVOURITE FEMALE IN THE INDUSTRY AND WHY?

Lundy Dale, because she’s been a strong advocate of supporting other women in the industry and she works so hard to create opportunities to showcase the diversity of talent. She hosted a women and beer dinner shortly after we opened and encouraged me to brew a beer for it. I brewed my first beer and it was an awesome experience.

Opening Callister! Really, just everything that it took just to open that front door to the public was huge. That, and also staying open. I’m really proud of Chris and all of our brewers and the high quality of beer we make. It’s been great right from the start.

GOALS FOR YOURSELF OR THE BREWERY?

My goal for this year is to get more involved in brewing and operations. I’ve done a few small pilot batches but I would like to do more brewing and possibly introduce a few different styles to Callister’s lineup. We’re also going to start bottling! We’ll have bombers for sale in the tasting room this year – plenty of work ahead!

Lundy Dale
Lundy Dale writes for What's Brewing BC and Beer Me BC, and was a regular contributor to the now-defunct Taps magazine. She is founder of BC Craft Beer Month, and co-founder of the Canadian chapter of the Pink Boots Society, an international organization that supports women in the Beer Industry.