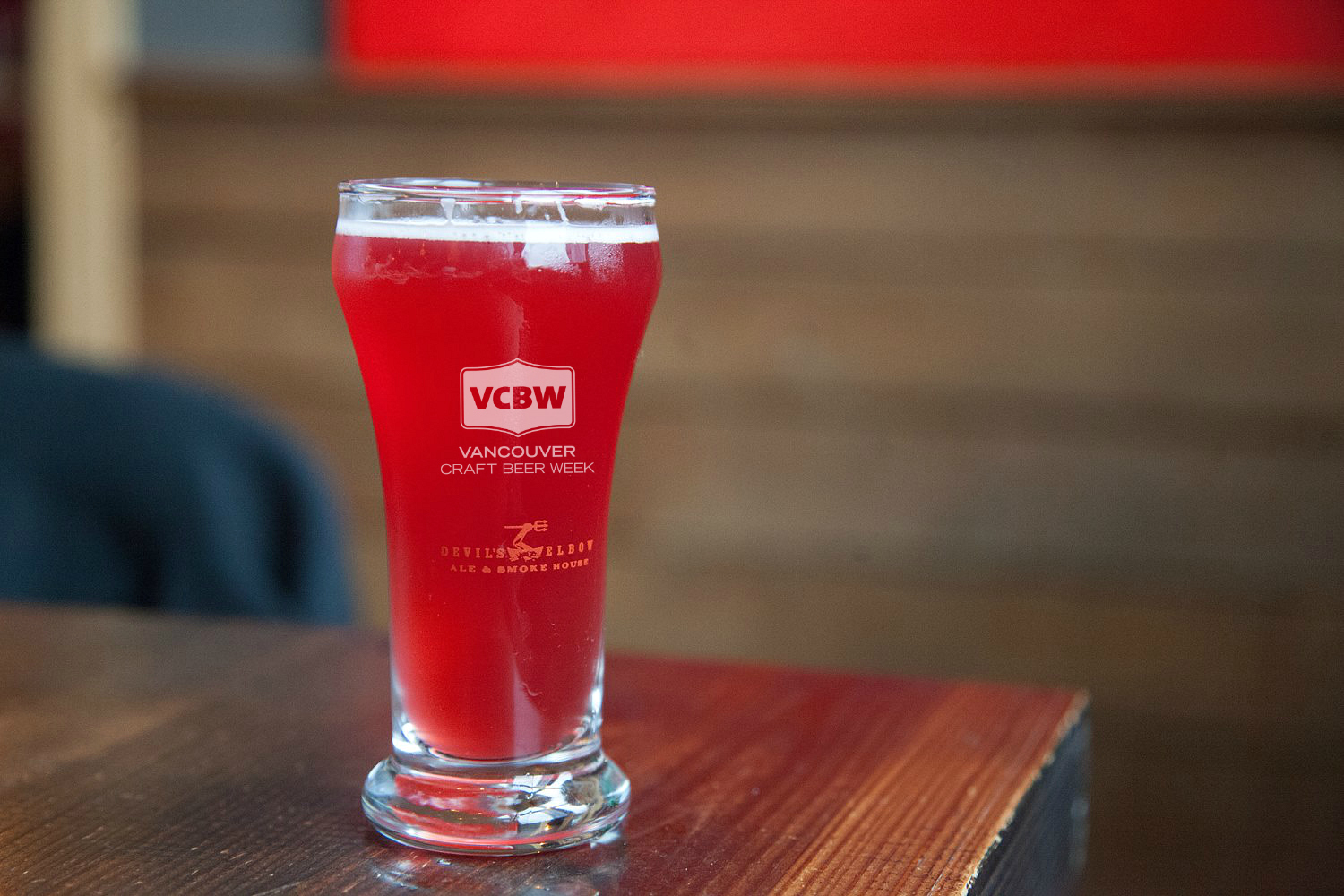 …and offer encouragement to the Fruit Curious beer drinker

As we’ve said before, Vancouver Craft Beer Week is a Week, not just one festival. Some of the events held during its 10-day span are quite unique.

Case in point: tucked into VCBW’s schedule of events is BC’s only annual fruit beer festival: Forbidden Fruit at Devil’s Elbow in downtown Vancouver, on Tuesday, May 30th. It leaps out at me because it’s the only night of its type on our annual calendar. It’s a tribute to what we don’t have: the Portland Fruit Beer Festival, enjoyed by Oregonians each June. They also get an annual Sour Fruit Fest at Cascade Barrel House, and even their venerable Oregon Brewers Festival (trivia tidbit: same owner as Cascade) usually lists a dozen or two fruit beers each July. Over the past 10 or more years, when a conversation with other beer lovers has turned to “what would you like to see in a local cask event”, a fruit beer festival is what I’ve always responded with. This annual Forbidden Fruit tap takeover at Devil’s Elbow is currently the closest thing we have that I’m aware of.

Why do I care? Because I’m a man who loves fruit beers.

The reference to my gender was intentional. Bear with me. 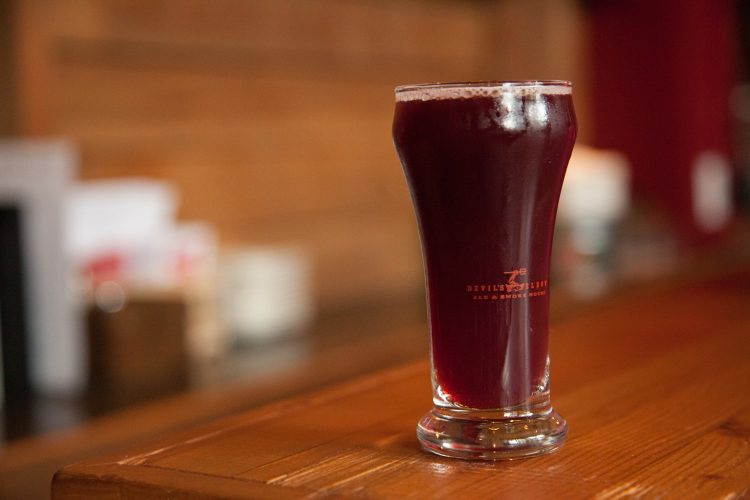 Fruit beers, as a class, seem to be one of those love ’em or hate ’em categories. As noted in the Spring 2017 What’s Brewing Tasting Panel feature, Fruit Beer is not strictly a style, but a grab bag of beers that happen to include fruit as an additive. Sometimes they’re lumped in with Vegetable Beers (read: pumpkin) and those with “herbs”. There’s no strict definition; if you think it’s a fruit beer, it’s a fruit beer.

Fruit beers in a modern North American craft beer context are often Belgian-influenced. In recent years, many are sours, combining multiple themes of experimentation in the Belgian tradition. Check the planned tap list for Forbidden Fruit and you’ll find the word ‘sour’ in seven of the titles. ‘Saison’ appears four times. ‘Wheat’ or ‘weizen’ shows up at least five, representing probably the most common image of fruit beers: the easy-drinking, summertime, patio-friendly fruity wheat beer. Our Tasting Panel winner, Fug­gles & Warlock’s Last Strawberry Wit, is typical of the style (by ‘typical’ I don’t mean it’s just ‘average’–here I recall the amazing version they brought to [I think it was] Central City Cask Fest Summer 2015, crammed with strawberries).

Much like the Oregon Brewer’s Festival, our own Farmhouse Fest, held every July and packed with saisons, has a very handsome array of beers featuring fruit. [Tip: this year’s beer lineup isn’t posted yet, but look at last year’s list for clues. Tickets still available, probably not much longer]. Nothing wrong with a fruit-enhanced wheat beer outdoors on a midsummer’s day, as my wife would attest. 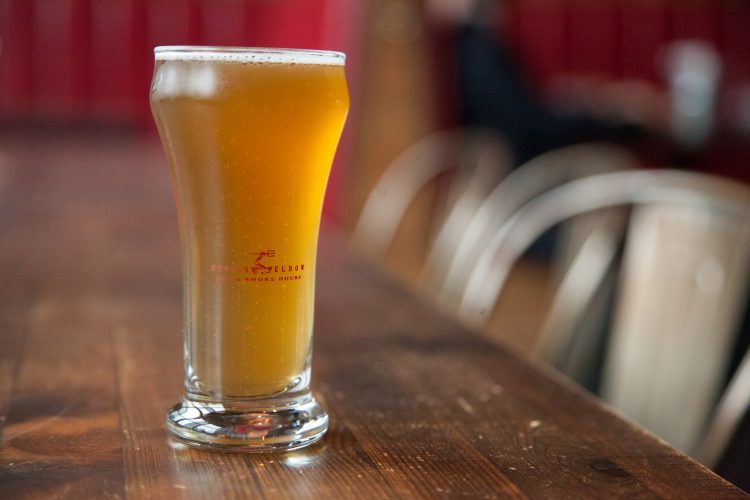 Which brings me back to the gender thing. It’s impossible to have an honest, thorough discussion of how this category is perceived and avoid it: some men just won’t allow themselves to enjoy a fruity beer.

What a loss, because there are flavour sensations of tart, sour and sweet that you can’t manufacture from hop and yeast selection alone. Not to mention that these are some of the most accessible and instantly gratifying beverages to drink. As your friendly neighbourhood beer evangelist, I’ve often used fruit beers (along with their partner in persuasion, chocolate beers) to cure a beer-hater’s perception of what brew “tastes like”. Minds are blown, usually for both genders.

Of course, accessibility doesn’t appeal to a certain breed of alemaster who prefers to think of beer as best enjoyed when it’s bruising the palate. Plus, there’s that male bias against sweet drinks that’s hard to shake in a social situation (which is why the fruit and chocolate trick just never comes off quite as well for me at the guys-only poker night). A homebrewer who calls herself Brew Betty captures the stereotype beautifully in this fruit beer competition thread:

Look, if you’re on the fence about fruit beers, or are at least “fruit curious”, here’s my advice: it’s a category any craft beer pilgrim needs to fully explore. At an event like Forbidden Fruit, there’s something for everyone, from sweet to sour. I’m thankful that we have (currently) this one dedicated event each year where closet fruit fans like me can hold our heads up, wave our fruit flags high, and proudly declare our fondness for the range of styles that make up this underestimated category.