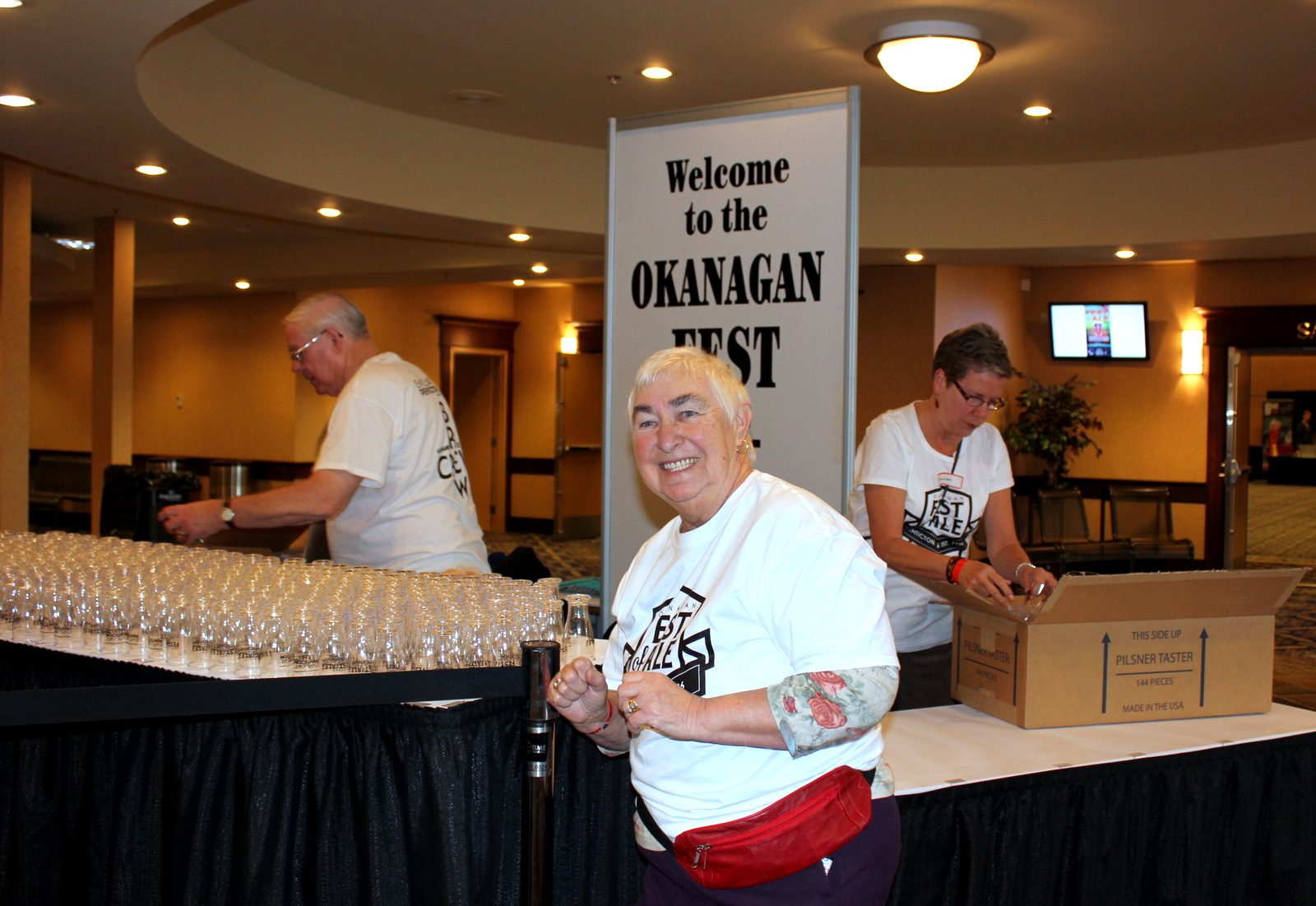 I love beer festivals. They are an integral part of the craft beer culture that has captivated our province. And what better way to learn about beer than in an environment where you can rub shoulders with drinkers and brewers alike, and try an incredible variety of flavours in a few short hours?

It wasn’t until last year, when I was invited to be a judge at the Okanagan Fest of Ale, that I ever thought about what goes on behind the scenes to produce one of the largest and longest-running beer events in BC. I’ve been attending for over 10 years, and I’ve seen the festival progress from a giant day-drunk dominated by macro labels to a micro-only model that highlights the ever-growing community of craft brewing. Curious to learn about the organization behind the festival, I sat down with Event Coordinator Ginger Budinski and Marketing Director Simon St. Laurent over a beer.

The Okanagan Fest of Ale Society (OFOAS) is a non-profit society run by a board of nine volunteers who meet once a month. Ginger is the only paid employee; she does something festival-related almost every day of the year. Sub-committees work on various aspects of the festival—brewery selection, finance, entertainment, etc.

The group decides together what the best way forward is, adapting to changing needs and environment. Suggestions are made and the board votes on motions. The process is more organic than formal. “Things are identified that need to get done, and then they get figured out,” Ginger says. This has enabled the festival to evolve according to the trends in the industry.

At its founding in 1996, the intention was to showcase Penticton; the decision to have a beer festival was somewhat arbitrary. There was a desire to draw people into the region and it just happened that there was an interest in beer. The Great Canadian Beer Festival in Victoria had started not long before. Local businessman Martin Lewis (who later co-founded Bad Tattoo Brewing) and first Penticton brewery Tin Whistle were integral in getting the festival off the ground, and continue to be very involved.

It started off as a grassroots festival. Then, going with the tastes of the times, big brands and coolers dominated. But there were always microbreweries and local breweries exhibiting. The festival grew when craft beer grew.

Kim Lawton has been involved with OFOAS for 10 years. She notes that “the festival used to be very commercial for a number of years, but a smart decision was made to respond to craft beer at the right time and the right people got involved – including lots of support from Cannery and Bad Tattoo. They were able to become strategic in the approach to craft beer.” She feels what makes OFOAS special is its ability to keep changing to meet demand. “They used to run out of beer early on in the day, but now the process is managed much better.”

“Last year was really magical” Kim recalls. “We have been learning and improving, and we have a new process that works well now.”

OFOAS works hard to attract breweries to the festival and tries to make it enjoyable for both exhibitors and attendees. There are breweries attending that have been in business for one year, and some for 25 years. There will be 62 exhibitors this year, and organizers have had to turn some away. “They love coming here,” Ginger says with a laugh. “The brewers are customers too. We want to make sure they are well looked after. They like coming here, the timing and the overall experience, the reception is fabulous. They get to test new products for the spring and summer.”

The organizers are always looking for ways to improve. The addition of the outdoor area was very well received, and the crowd loved the buskers that were added last year. Also in 2016, volunteer token-takers were eliminated, so consumers were served directly by the brewery team. This made for a more intimate experience and increased the brewery staff’s interaction with the public. This year, changes to the token distribution process will provide easier access. “The board tries to respond to consumer needs,” Simon says. “This is a collaborative effort of brainstorming and building on each other’s ideas.”

The festival wants to attract all types of beer drinkers: people new to craft beer and people who are already knowledgeable. “We introduced casks a few years ago, and it really excited the seasoned craft drinkers as well as brewers, who bring what they like: something exclusive to the festival or something new they are testing,” says Ginger.

Breweries and cideries must apply to attend, and must meet certain conditions, such as annual production below a set limit. There is an exhibitor’s fee for the brewers, but they are compensated on a per-pour basis. Since the fee is the same regardless of the beer, the price points of the beers the brewers choose to bring come into play, and the value of the reward can fluctuate depending on how the brewery chooses to invest in the festival. “It’s a model for flexibility, to gauge which beer and how much to showcase, what best reflects on their brand and business—the limited number of barrel-aged beers to sample on a Friday night, or their flagship beer that will pour all weekend.”

Kim doesn’t have an official position on the board, but is a key member of a judging organizing committee which also includes Judging Chair Warren Everton, Chantal Cloutier, and a recent addition, Eric Hanston. In addition to a lot of advance prep work prior to the event, the judging organizing committee spends much of Friday and Saturday together.

Judging evolved from two people tasting every beer and making their own subjective decisions to a panel of nine industry experts. Simon notes that judging adds credibility to the festival. Although it’s hard to quantify whether award recipients see increased sales, Ginger agrees that judging and awards do carry some weight. “Participating…is value added for the brewers”, she says. “We want to be as popular with brewers as with consumers.” The People’s Choice Award is also important to the brewers.

The organizers want Fest of Ale to have a great reputation among breweries and consumers in BC. This drive to make the experience great for everyone has led to the creation of additional events which add to the overall experience, such as a presentation on the history of craft beer by noted author Joe Wiebe, and the Murderer’s Row cask event at Kettle Valley Station Pub after the festival has ended. The only limitation on adding more activities to the festival and surrounding events is the availability of enough volunteers. A virtual army of willing hearts and hands are a huge reason for the festival’s ongoing success. It is a source of pride for locals to have such a well-attended and long running festival in a community of 35,000 people.

The organizers want Fest of Ale to have a great reputation among breweries and consumers in BC. This drive to make the experience great for everyone has led to the creation of additional events which add to the overall experience, such as Joe Wiebe’s presentation on the history of craft beer, and the Murderer’s Row cask event at Kettle Valley Station Pub after the festival has ended. The only limitation on adding more activities to the festival and surrounding events is the availability of enough volunteers. A virtual army of willing hearts and hands are a huge reason for the festival’s ongoing success. It is a source of pride for locals to have such a well-attended and long running festival in a community of 35,000 people.

The festival also gives back to the community that supports it. OFOAS has raised more than $577,000 in charitable contributions over the last 20 years.

So next time you are at a beer festival, consider toasting to the organizers who spent countless hours planning, the legions of volunteers who worked tirelessly, and the community that gathered together to put on a celebration of delicious craft beer just for you!

Insider tips for your Okanagan beer fest getaway, Part I