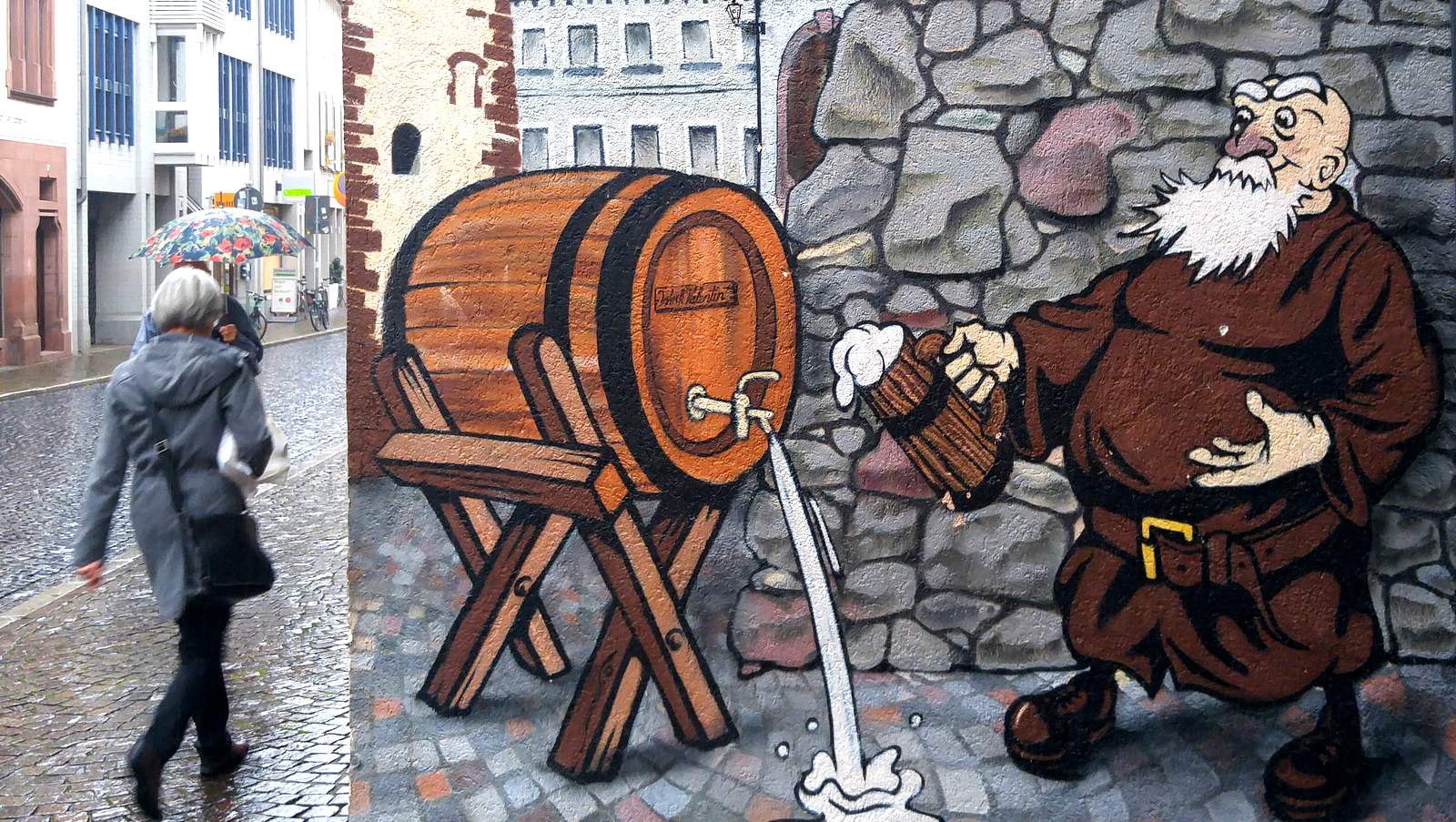 In October I travelled through the Netherlands, Belgium, Germany and France, on the lookout for craft beer as well as the famous traditional beers that have influenced the modern brewing movement. Craft was easy to find in the Netherlands and France, but scarce in Germany. In Marburg, a city of 80,000, the only bottle shop specializing in craft had recently shut down. The impressive availability of traditional styles offered some consolation; every gas station, grocery store and sidewalk cafe had a good selection of excellent Pilsners, Weisses and Dunkels. Even the tiniest village had at least one building displaying a light-up beer logo—the only thing distinguishing the local pub from the other buildings on the street. My only complaint was that it was very hard to tell the individual beers in a style apart—I know I drank a lot of Pilsners but there isn’t any single one that stood out from the rest in my mind. The Germans do love their beer, but it seems they are hesitant to embrace experimentation beyond the well-established styles. Though perhaps this isn’t surprising, given that 2016 is the 500th anniversary of the Reinheitsgebot purity law.

Although it was elusive, I did manage to locate some German craft beer. Among the notable finds was Green MONKey Mandarina Pilsner from Klosterbrauerei Weissenohe, which had a strong yet delicate aroma of mandarin orange while staying true to its pilsner roots. We found a stash of Heidenpeters beer at a burger joint and stayed to try several. If you see a bottle from them, buy it; everything they did was great. Brewing in a West Coast style, this Berlin brewery uses American hops such as Mosaic, Amarillo, Citra, and even have their own version of a Black IPA, the beloved Cascadian Dark Ale of the Pacific Northwest. It was kind of funny to see that brewers from the country that has had the biggest impact on the modern craft beer movement are now taking inspiration from the more experimental styles where we live.

That same trend of North American influence was also apparent in France. Craft beer was easier to locate there than in Germany, but still isn’t quite mainstream. Lyon had only a handful of bottle shops in a city of half a million. There were quite a few pubs serving craft beer, including Ninkasi, a chain of 12 pubs scattered around the city and supplied by a central microbrewery. Chope de Lug, a bottle shop in the old part of the city, sells only beer from the Rhone-Alps area. Alfredo, the owner, said that when he first opened 5 years ago people didn’t know what craft beer was, but now there are 130 microbreweries in a 250 km radius. Forty opened in the last two years alone. He feels that craft beer is on the cusp of an explosion in France, “Its coming” he said with a smile, “we’re ready”.

At Alfredo’s shop, the current most popular beer style is IPA, with Double and Imperial IPAs also in high demand. He is aware that sour beers are on trend right now in North America, and thinks that France will be catching on to this soon. The sour wave is already well established in the Netherlands. In Amsterdam, I had one of the best sours in my entire life: a collaboration between local brewery Oedipus and Commons Brewery in Portland.

The Netherlands craft beer scene most closely resembled that of home. The beer styles, names and even label designs were very similar to BC. I had a dry-hopped sour, also by Oedipus, that was a dead ringer for Four Winds’ Nectarous. While in The Hague, I met Jamie, who had opened Dorst Craft Beer Shop just two days earlier. When I asked what was good, he said “all of it. I only sell beer that I drink myself,” and went on to say that his shop was special, as he only sold beer made directly by the brewer. In Europe there are three common ways to produce a beer. The method we are most familiar with is buying or leasing property, investing in equipment, and brewing from a permanent location. Increased population density creates expensive real-estate and infrastructure costs, which many start-up breweries can’t afford. A popular method to get around this involves using the space and equipment at another microbrewery, but otherwise remaining an independent company with its own brewers, brand and distribution process. These two methods are acceptable in Jamie’s shop, but there is a third method he describes as cheating: a recipe is mass-produced by a macro-sized brewery without any actual brewing staff employed by the brand, but the label and marketing make it appear to be a hand-crafted batch.

It was funny sharing our Dutch craft beers with our Belgian hosts the next day. They politely tolerated the dry-hopped sour and Thai-ginger-chili beer, but found the West Coast style IPA to be unbalanced and extreme, and declared it undrinkable. I suppose when your country is brewing some of the most celebrated beers in the world, there isn’t much need for experimentation. I didn’t bother even looking for craft beer in Belgium; I was too busy trying to get through the vast number of iconic beers they produce. I had sours that brought tears of joy to my eyes, funky saisons with otherworldly aromas, golden blondes with level upon level of complexity, and deep, rich Trappist ales that went down smoothly despite an ABV of 10 or higher. Also impressive was the enthusiasm of the Belgians for their beer. Our new friends at the local pub were delighted to find I had an interest in beer, and I spent many hours there one evening, trying all their favourites and learning the history behind each beer.

The difference between craft and traditional was summed up nicely by Jamie, who said, “yes, I can go to a bar that has a hundred beers on tap, and have a really nice tripel that tastes just like the twenty other tripels they serve. It’s good, but it’s boring.” The classic European styles are hugely influential to the world beer scene and should continue to occupy a place of high esteem, but the growing interest in craft shows that there is also room for innovation and experimentation. The next few years will be very interesting as craft beer moves into the mainstream in Western Europe.