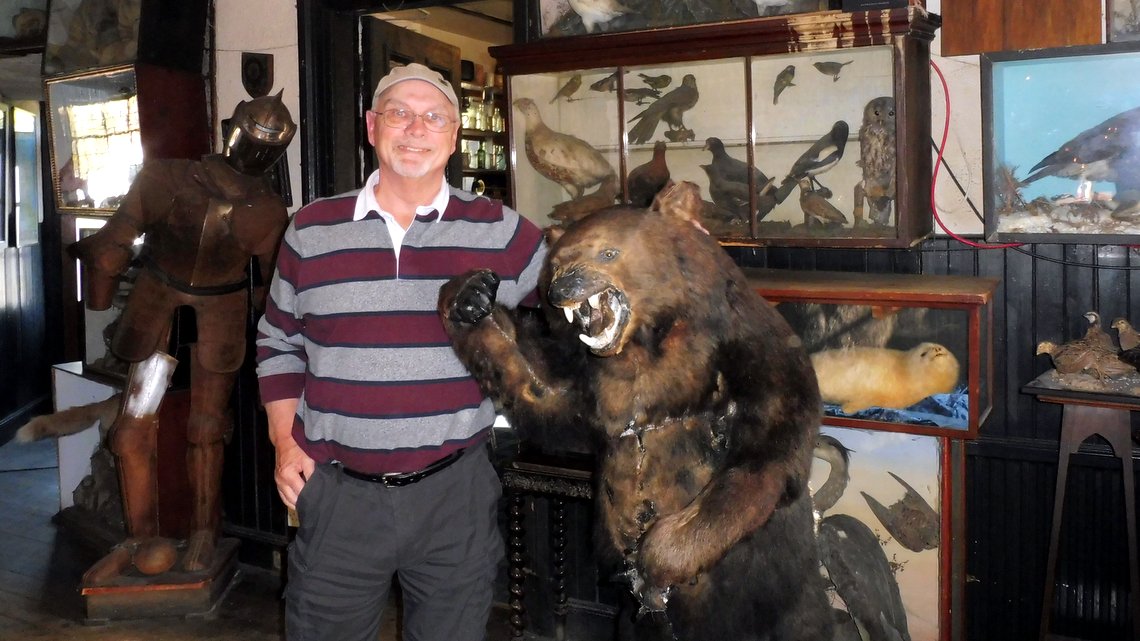 Karen and I return to Britain every three or four years, and we had another great trip there in May 2016. The weather was good and the sights and the beers were excellent. We traveled by train and bus, staying in places like Salisbury, Torquay, Shrewsbury, Llandudno (north Wales), Liverpool, Keswick (Lake District), Glasgow, and London. We took a lot of side trips , including a boat ride down the River Dart, visits to Conwy and Caernarfon castles, the Highlands, and Kew Gardens.

Britain has in recent years seen the growth of many quality breweries, some regional and some micro. We sampled a few of their offerings and visited some good British pubs. Any beer and pub lover who visits the UK should consult a recent copy of CAMRA’s Good Beer Guide, which lists each local CAMRA group’s favourite pubs and the national award winning real ales for the previous two years. It is indispensable for finding the best and avoiding the mediocre, and is even available to download on your phone or tablet.

As on past trips, we were aware of angst about the health of the real ale industry. While production seems to be growing, an estimated 25 pubs close every week, for a myriad of reasons. Alcohol consumption is down, particularly in licensed premises, shopping chains offer quality ale at discount prices, and some pub companies (Pubcos), which own close to 20,000 of the 48,000 pubs in the UK, are squeezing their tenants. Good old free enterprise at work. So CAMRA is interested in saving pubs, even if they sell some naughty beers and ciders. In fact, most pubs, even CAMRA-voted pubs, sell a wide selection of beers including multinational swills like Carling, Stella Artois, etc.

In the UK, the beer industry is very stratified, with the large Eurofizz companies at the top, followed by large British brewers (some of mediocre quality), medium-sized regionals, and small, often new, local breweries. The smaller the brewery, the better the quality, in my experience. I didn’t come across as many brewpubs (except in London) as we have here on the west coast of North America.

I did stumble upon some very good real ales, though. Those who know me are aware that I prefer more robust brews, particularly hoppy ESBs and IPAs. On this trip, I noticed more hoppy ales available, though they usually had a bit less alcohol than our aggressive West Coast style pale ales. In fact, the UK tends more to balanced hoppy ales than here in Canada and the US, where there has been a recent tendency for breweries to ramp up the malt in their IPAs. Overall, the availability of different brewing styles is gathering momentum in the UK. The great appetite for gassy lagers as seen on previous trips seems to be waning.

Most pubs advertise real/cask ales but a quick look sometimes proves the reality to be different. I generally wander in and check out the hand pumps, and if they appear wanting, I leave. Here again, it is valuable to have access to the Good Beer Guide. I won’t list the trip’s best beers, because it would only be a drop in the bucket of great beers to be found around the UK.

CAMRA UK, with nearly 180,000 members, is querying its members about its future direction. They continue to lobby government about issues such as the importance of pubs in the community, preserving said pubs, taxes on pubs and beer, Pubcos, and educating the public about quality beers and ciders. Check out their website to see what they’re working on.

Even though our sampling of beers and pubs was limited by time and liver, I would like make a few recommendations. The size of the town or city is not necessarily an indicator of good beer availability. Modest-sized Shrewsbury had many good pubs while similarly sized Torquay, in Devon, had very little to offer. North Wales has some very good smaller breweries and nearby Liverpool has some excellent pubs and breweries. Scotland has seen the emergence of many high-quality breweries in recent years. In London, on my way back from mud-larking on the banks of the Thames, I happened upon Temple Brew House just off the Strand, which has a great lineup of craft beers and is typical of many brewpubs or taprooms springing up across the city.

As usual, our 2016 vacation in Britain was very enjoyable: lots of history, meetings with relatives, scenic walks, great museums and galleries, and loads of fine pubs and ales.