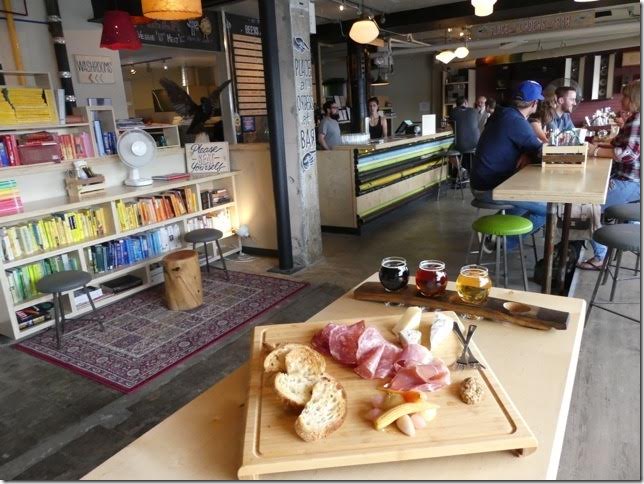 R&B Brewing is back baby! If you want proof, crack open a bottle of their Vancouver Special IPA and smell the hop aroma.

Of course, die-hard friends of R&B know they never really went away, despite what you may have read. Yes, there was a very rough patch, but thanks to the involvement of Howe Sound Inn and Brewing Company, R&B was saved as a going concern. All credit to the Fenn family for coming to the rescue. I was lucky enough to bump into Dave Fenn during the soft opening of their Pizza and Alehouse (right next to the brewery at 54 East 4th Avenue). I was able to thank him personally for saving R&B and revitalizing it, rather than simply turning it into Howe Sound’s Vancouver production facility (though they did need extra capacity to service the Vancouver market with their Howe Sound Lager during the summer months).“We had an affinity with the R&B story, as we both started at about the same time, and we knew Rick and Barry and respected all the work they undertook through the years. But most importantly, we felt that R&B was an integral part of the East Vancouver brewing scene, and we wanted to make sure that this brewery had the capacity and vigor to continue”, says Fenn. The décor is a modern/retro eclectic mixture with laminated veneer lumber counters, and a variety of old light fixtures and speakers re-purposed from the brewery.

They have 12 taps, including one cider, two handpumps, plus two taps for the wine drinkers. The stylized tulips on the beer board indicate the style of serving glass, not the use of tulips in the beer, or any Netherlands connection. Thoughtful touches include the library of National Geographics and novels; the Pokemon-character-like food-customer locators (even more weirdly, the underside revealed it to be Spöka, from IKEA), and the self-serve water station, handy if you are on 20 oz pints rather than the 4-taster flights (cute taster glasses). I particularly liked the fact there was a marker pen note on the stainless steel splashback beside the taps recording when the lines were last cleaned.

It took 8 months of hard work and hard wrangling of permits to get the tasting room, one of the few in the city that is Food Primary, up and running. Because they really wanted to go with this type of license, partly so they could have a patio, there were a whole bunch of unexpected (to put it politely) requirements, such as:

R&B Co-Founder Barry Benson took us for a quick look at some of the improvements in the brewery: additional floor drains, a more powerful boiler, a glycol chiller and a new refrigeration system for the expanded cold-storage room (the Christopher Walk-in). Most of those old horizontal milk tanks that some of us will remember from brewery tours have gone. With their huge surface area, they were ideal for the truly top fermenting yeast R&B were using for their British Style ales when they first started up, but were probably unnecessary for modern top-fermenting yeast which do not create such a surface yeast crop. They also work less well for Pacific Northwest IPAs where you want to retain as much aroma as possible.

Much credit must go to Brewery Manager Patrick Moore*. No, not the former Greenpeace Patrick Moore who figured out “Forests are the Answer” long before most people realized that climate change was a bigger issue than the size of clear-cuts. No, not the astronomer Sir Patrick Moore, who wrote the Boy’s Book of Space in 1954 (showing my age). The Patrick Moore who was a rep for Tree Brewing and Nelson Brewing back in the early days. Thanks to Patrick, R&B beers are now much improved with tweaked recipes, new yeast strains which are replaced regularly, and new stubby conical fermenters and bright tanks which are a lot easier to keep clean. It is the end of an era.

The two milk tanks remaining still work well for the Sungod Wheat Ale, which is—for those who have not tried it—a crystalweizen, so don’t expect a white haze. With a new yeast strain, “I would not have thought it” said Benson, “but I believe it’s better. It won silver at the North American Brewing Awards this year.” I would have to say that the Red Devil (an English Pale Ale, 5.0% ABV), the Raven Cream Ale (a strong dark mild 4.8%) and the East Side Bitter (read the initials, 5.5%) are all much improved while remaining true to their original styling. Benson says “I feel the quality of the beers has improved 100%”, and I never thought I would hear him say that. The best thing is that Barry seems really happy with how things are going. Note: co-founder Rick Dellow moved to Newlands Sytems Inc., and is happily doing work related to his early days: testing Newlands’ equipment on new brewery set-ups.

Back in the tasting room, my spouse and I had now downed, between us, 20 oz pints of Dark Star Stout, East Side Bitter and Vancouver Special IPA (6.0% ABV). And, yes there is a reason the IPA is that good: Simcoe and Citra topping off Columbus and Chinook. However, I decided to have a Raven Cream Ale with my personal vegetarian pizza and for dessert. I had not had one for years, but I am really loving the revitalized Raven, so I made sure to toast a stuffed bird present in the taproom (who looked like he might give me a hard time if I did not).

The pizza we had was excellent, packing a punch with fresh ingredients and lots of fresh basil. As well as great pizzas, they also have a selection of wines for the non-beer drinker in the family. To the delight of us old-timers, Christina Willis (formerly of DIX and High Mountain Brewing) is one of the restaurant managers.

Considering this was a soft opening, the place was hopping on a late Tuesday afternoon so the rumor mill (and fortunate timing for the monthly CAMRA newsletter) must have been working well. Derrick Franche, long-time brewer at High Mountain (and also formerly of DIX) had dropped in on his way to do a few City tasks, so it was almost like old-home week. Quite appropriate, because R&B were the first to provide guest brews to the seminal Vancouver monthly cask nights at DIX. Great to see all that history has not been completely lost. R&B has managed to avoid becoming extinct, and has evolved to stake a place in the modern BC craft brewing landscape.

* Editor’s Note: a previous version of this story incorrectly stated the job title of Patrick Moore, former R&B Brewery Manager, as “Head Brewer”. What’s Brewing regrets the error, and would like to recognize the contributions of R&B’s brewers including current Head Brewer Rod Hughes and his team Allan Cukier, Octavio Pauley and Carly Hase, as well as past Head Brewer Liam Jackson.