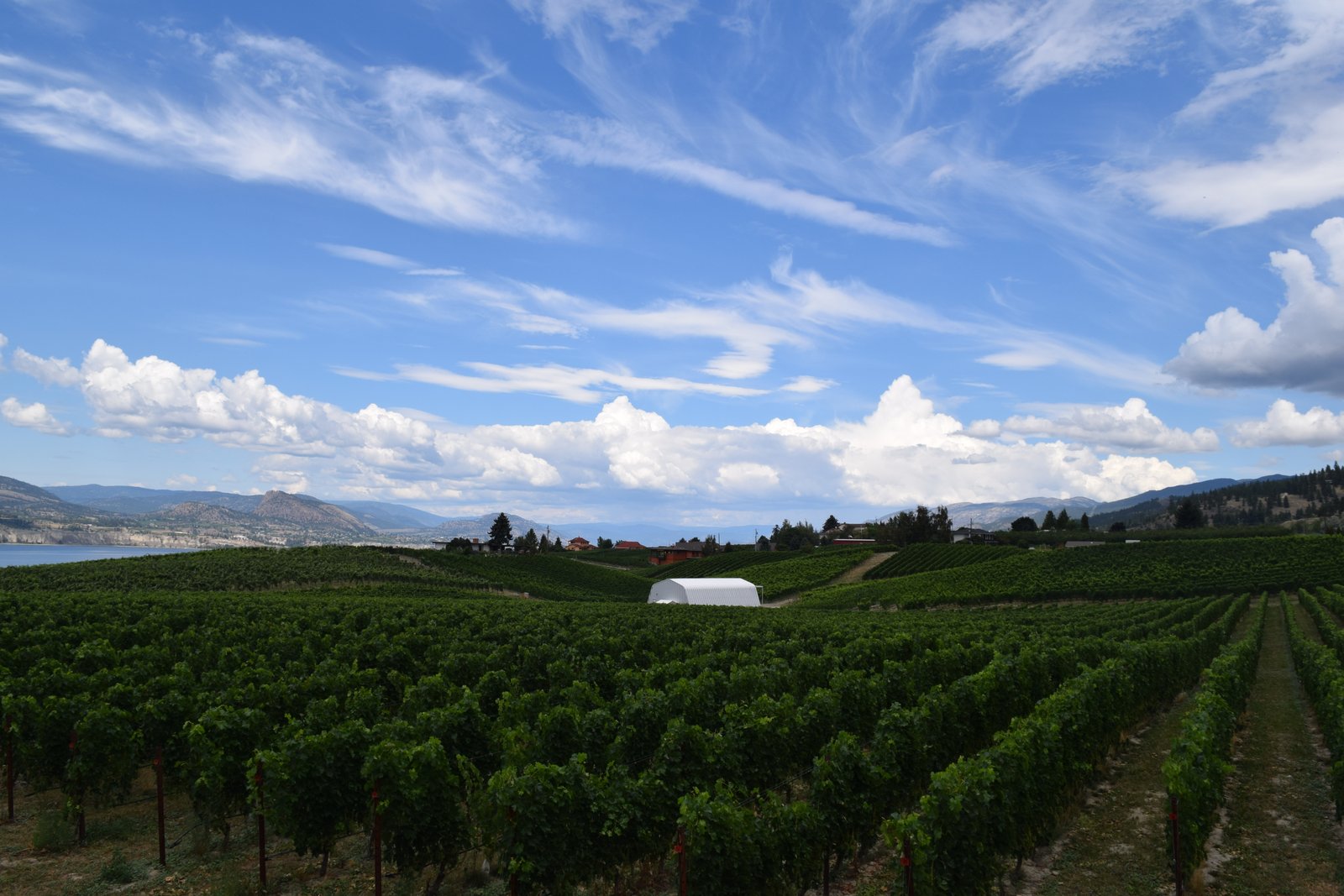 In the summer of 2016, What’s Brewing (in the form of editor Dave Smith and wife Ivana, aka the BeerSeekers) embarked on a massive tour of the BC Okanagan & Interior craft beer and cider scene. This resulting report on where to visit in the South Okanagan is part of our Staycation BC 2016 series.

South Okanagan is known as wine country for good reason. But it’s also craft beer and cider country. If you haven’t experienced it: this pictorial might convince you.

So you’re up for a road trip? There’s no better place to drive than in your own backyard, British Columbia. Let’s travel the beautiful Crowsnest Highway, then approach this Okanagan experience from the south. 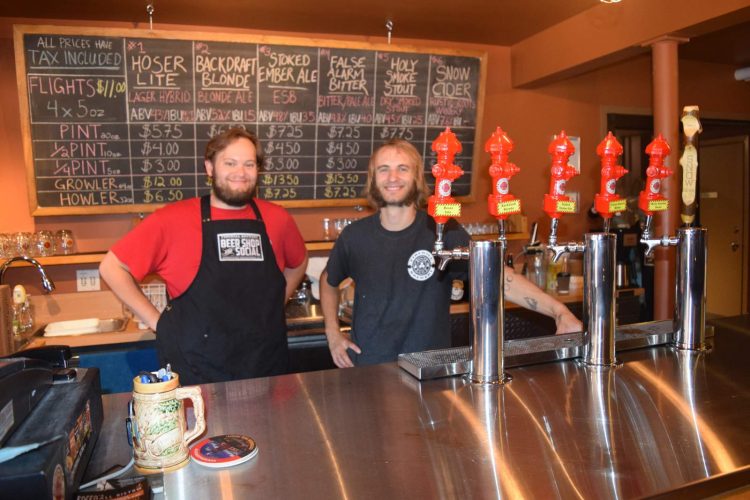 John and Sid in the taproom

Pull up to the only craft brewery in the south end of the region. Housed in a former fire hall, you’ll find it below local favourite Pappa’s Firehall Bistro. If you’re hungry, place your order in the restaurant before heading downstairs.

Sid Ruhland is a self-taught homebrewer who began while in college. Fast forward to today: he, father Jim and family run a community-minded business. Their cosy, homey tasting room is notable for being kickstarted by a crowdfunding campaign. A large space directly outdoors is used for small concerts and earmarked as potentially a large patio.

Penticton’s oldest brewery has recently moved from their orig­inal location to the space vacated by Cannery Brewing. They now have a comfortable tasting lounge with six taps pouring a selection of their twelve beers. They don’t have a kitchen, but step down the hall and you’ll find a couple of food outlets where you can grab a meal to enjoy in the taproom.

Tin Whistle’s name comes from the first train that came to Pen­ticton on the Kettle Valley line. Their product branding reflects the local area and history. 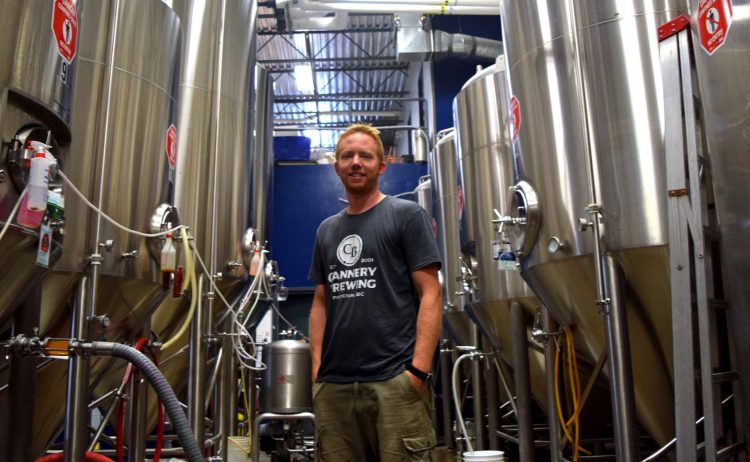 Ross Thompson with his fermenters

Penticton has been respected as a craft beer town for years. Since 2001, Cannery Brewing has been one of the primary rea­sons. With very stable, community-minded ownership, Can­nery has acted as a catalyst for the South Okanagan craft beer scene, and as a more-or-less direct result, Penticton has so far kept ahead of larger Kelowna in craft beer penetration. The BC Interior’s only CAMRA BC branch thrives here.

Cannery has grown by leaps and bounds but has maintained its “small brewery, big flavour” philosophy and feel. In 2015, the Cannery folks moved into their new location on Ellis Street, and they now have a good-sized taproom and patio where you can relax and enjoy a pint or two. Head Brewer Ross Thomp­son notes that their focus is on making solid, balanced, drink­able beers, and they certainly hit the mark. With new recipes added for their tasting room, they tend to brew 8 year-round beers plus at least one seasonal. If you’re feeling peckish, the taproom has a light food menu, including the most original vegetarian nachos around.

Being very community-minded, The Cannery supports local charities and events, and features local talent with live mu­sic every Sunday. When What’s Brewing dropped by, we were treated to a lively concert featuring musicians jumping right up onto the bar. No lack of fun when you’re at the Cannery!

Like a game of musical chairs, a new brewery is set to open this fall in Tin Whistle’s old space. Highway 97 is the longtime dream of John Kapusty, a local entrepreneur, outdoor enthusi­ast and homebrewer. . They have redesigned the space and are creating a clean, open-concept brewery and taproom. They plan to have 8 beers to start, including a Pilsner, an Am­ber, a Scotch Ale and an IPA. 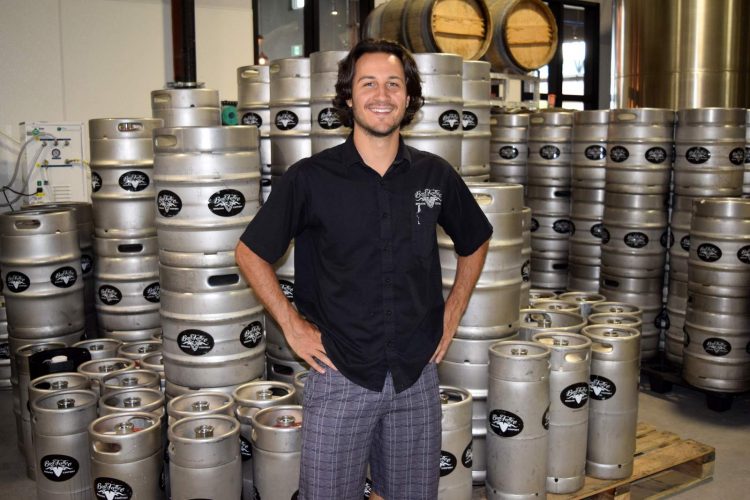 Lee Agur with his kegs

What happens when you mix an experienced hospitailty man­ager, a bright young ex-accountant from a smart family, beer and a pizza oven? A recipe for success, that’s what.

Bad Tattoo, a relative newcomer compared to others in Penticton, exploded onto the scene in July 2014 and quickly broke all pro­jections for patronage. Co-owner Lee Agur describes the sense of awe when they first opened the doors and were swamped with five times the food orders they planned for. “We’ve regularly had to turn away 100 people a night”, he says ruefully. It’s true; we dropped by the busy lounge on both a Tuesday and a Wednes­day and witnessed firsthand the wall-to-wall clientele.during the slowest days of the week.

The secret is the one food item they serve: possibly the best thin-crust pizza in the Okanagan. With flavours like Ham & Apple, Spanikopizza and an amazing Falafel creation, their gourmet pies are the perfect manna for a beer-thirsty crowd.

Besides the great food and well-appointed 115-seat lounge, what impressed us was their brewhouse. We toured a clean, well-laid-out facility in a deceptively large warehouse-style space with lots of room for expansion. And they’ll need it; Lee currently makes a point of managing their growth, but there’s plenty of demand.

The Barley Mill has been a part of Penticton’s fabric seemingly forever. They opened as a neighbourhood pub in 1982 and be­gan brewing their own beer in 1997, at the height of the micro/ brewpub trend. Unlike many breweries of that vintage, they’re

still going strong with 5 year-round brews and a seasonal regularly on tap. The biggest seller is the Mustang Pale Ale, named after a horse (as are all the beers) in reference to the past owner’s love of all things equestrian.

Did you know that the Mill packages beer? We were fortunate enough to get a personal tour from original brewer Ray Huson, who showed us how they can their Classic Draft Lager.

In addition to being a great food & beverage spot, The Barley Mill is a shrine to sports memorabilia, especially hockey; for­mer owner and Penticton native Larry Lund played alongside Gordie Howe in the World Hockey Association. His passion has left its mark on the walls of the brewpub, which is worth a wan­der around after you’ve finished your meal.

Things to Do: HooDoo Adventures 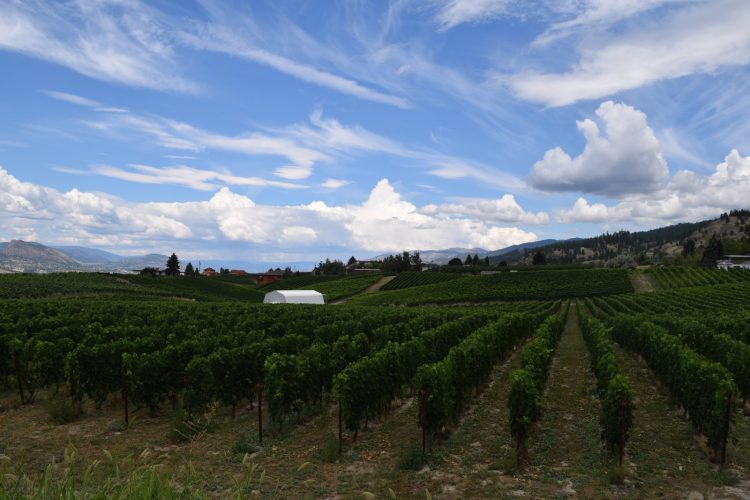 OK, you’ve just spent a couple of days doing nothing but eating and drinking. Let’s look for something more active to do while in Penticton, but without getting too adventurous. Hoodoo Ad­ventures has the perfect plan: the Spirited Brews Cruise. This easy, guided cycle tour down the Kettle Valley Rail Trail in­cludes stops at 2 craft distilleries and 2 craft breweries. We en­joyed beer and pizza at Bad Tattoo at the end of our trip. See? More eating and drinking. We’ve got your back.

Housed inside a large warehouse space with a climbing wall, Hoodoo specializes in various outdoor activities like biking, kayaking, climbing, or hiking. You can just rent a bike or kay­ak from them, get a ride with their shuttle, or book one of their other guided tours.

Mike Hill, shuttle driver, tour guide, and husband to owner Lyn­die Hill is quite knowledgeable about the local history and geography, and will regale you with facts and stories as he drives you to the beginning of your adventure.

Where to Stay: Ramada Inn

Coming to Penticton? Look no further for accomodation than the local Ramada. It punches above its weight in terms of quality; we were shocked how beautiful our (regular) room was, complete with patio and pool access via sliding glass doors. But the best part had to be its beer-centric casual din­ing restaurant, known as the Kettle Valley Station Pub.

Where to Eat: Kettle Valley Station 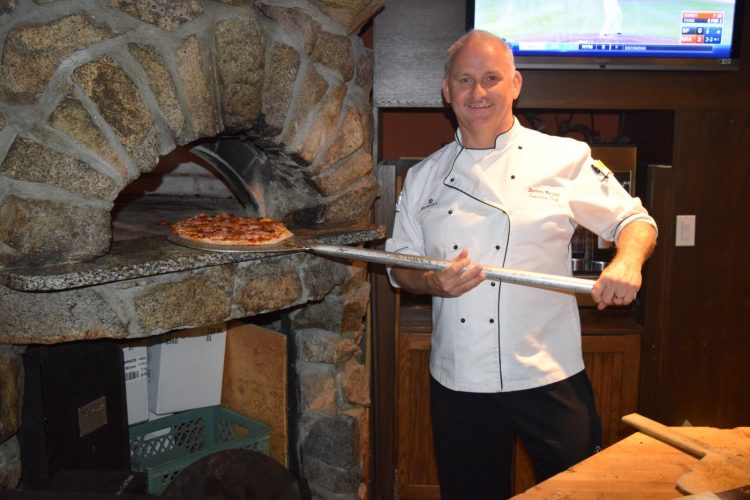 If you’re lucky enough to meet the guy pictured above, you’re in for a good conversation. Down to earth, but with skills well beyond those of your average pub chef, James Bryan brings his wide international experience to bear at the Ramada. He can rattle off stories from European kitchens and dish on the BC craft beer scene, one which he’s long helped support. No wonder CAMRA South Okanagan had its first meetings here.

Where to Eat: Craft Corner Kitchen

Owner Jonathan Cote is a mixologist working hard to support local distillers and bring back the craft in cocktails. He has a special interest in the Tiki culture of the mid-20th Century. If you ask, he’s sure to make up something special for you. Make a note: CAMRA BC members get 15% off.

Of course the entire Okanagan area is dotted with wineries, but an even better idea (we think) to visit Summerland is for its two significant craft cideries. Browse to our feature Craft Cider Scene Ripens In The Okanagan for more about Summerland Heritage and Dominion Cider. Visit our BC Craft Map for more listings.

Where to Eat: Local Lounge + Grill

After visiting Summerland’s cideries, a stop for lunch or dinner at the Local Lounge is a must. Set on the shores of Okanagan Lake, Local is an upscale pub and restaurant that focuses on serving fresh, local food with BC wines and craft beverages. If you’re a pizza fan, don’t be shy to try a ‘flatbread’; unlike most tiny pub meals tagged with that name, it’s immense.

Proprietor Cameron Bond is deeply knowledgeable about the craft beer scene, so tell him you’re a fan of beer magazines. :)