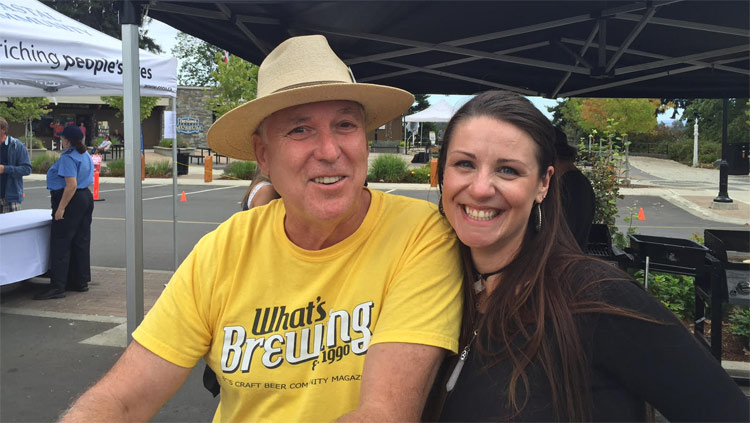 What’s Brewing attends a lot of events. The craft movement is so large there are continually events everywhere, so we try and catch what we can. Here are some of our most recent adventures in Summer 2016.

Yes we were here again. People now say “Hey, its What’s Brewing!” when they see me in our yellow t-shirt. Well organized, great volunteers, no drinking for servers as is the law. Craft Brewers spread out throughout the grounds and waterside trails. Kelowna Rocks and so do the folks. We met great people walking the beer walk. Ya’ll are a good lot. Thanks for talking with What’s Brewing -we love you. Please look us up and join us. Thanks to the beer folk around Kelowna and the local breweries, Tree and BNA.

The Beer spots of choice for What’s Brewing: The Curious, The Train Station, Mission Tap House and all around town on Festival Weekend; great vibes.

We all know now that real beer is here to stay. Yet the discussion now is with the people who don’t realize there is a whole new world of taste and flavour swirling around them. They always buy what they always buy and no one will make them change kind of rap. Hopefully they’ll go through a period in their life when they have to go seek out the beers they swear by. We pioneers did and life always comes around full circle and you’ll have to go to another planet to get ****.

We all know someone who is in this category. It’s fun. The current scene, to see events and tastings, dinners, stores, and pubs doing everything they can to push the beer movement to new heights.

This hop-centered event showcases BC beers from everywhere we can imagine around BC. Let’s face it, we’re pushing 140 craft breweries in BC. Breweries get themselves into the mix. As always the food truck was excellent and the DJ had good real beer flow going on for this outdoor annual event. The Phillips Team put on a good gig and all the regulars of the hop are about. Homeboys. Owner Matt, friend to all of us, is always on hand.

It seems all the hop heads all meet up once a year for this fantastic event. I see my young hockey buddies riding the real ale range. You guys are a scream. The new ones are driving the movement. Thanks Phillips team for giving the community this hopping soiree.

At Waterwheel Park in downtown. This was their 1st go round into doing a festival. It lived up to its name, bringing together great beers and local foods in a spirit of easy going community . Like I remember in the UK, outside the pub on summer nights with friends, having a jar and talking about beer, that feeling. What’s Brewing thought the energy was relaxed and many educated questions and discussions were being had throughout the festival square. The back ground music was entertaining and food was just excellent. In attendance for this first annual: Don Bradley original Bowen Island Brewing co., Barry Ladell original Longwood, Paddy Trevor CAMRA Powell River and so it goes. Organizing Vice Chair of this event was our own Gary Saville beer pioneer. Living and bringing it to Duncan.

Thanks when seeing our distinctive What’s Brewing shirts for saying you’ve had a look at our publication. See you on the circuit. If you’re a business, investing in whatsbrewing .ca is the bargain of the year. We are all volunteers. We make nothing. Bring your beer friendly skills, join us somehow. Join US