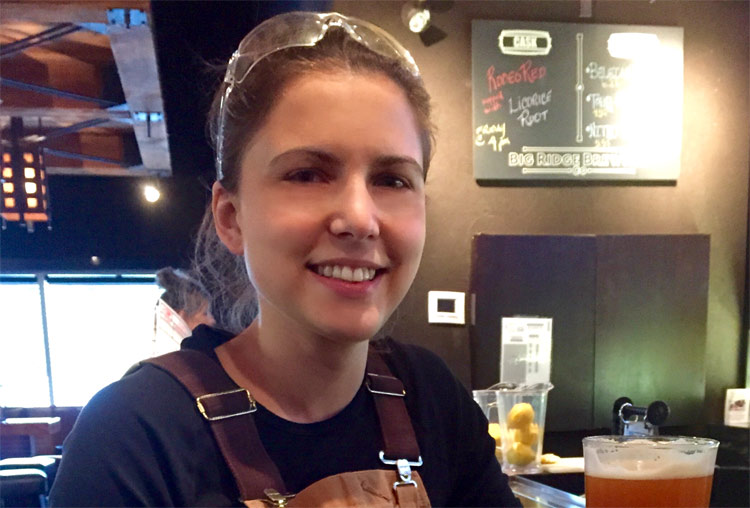 Every time I walk into a brewery or brewpub I am always seeking out any women I see behind the scenes, especially if they are cleaning kegs, mashing in or are heavily focused on a beer. J

That’s how I met Ashley Brooks about 3 years ago, while attending one of the Thursday Cask nights at Yaletown Brewpub. There she was, in overalls, glued to every word that head brewer Tariq Kahn had to say to her. I had a brief opportunity to say Hi to her, and she was just bursting with enthusiasm and passion. I could tell that she was going to go far quickly! Within the three years that I have known her, she has gone from doing her practicum at Yaletown to becoming head Brewer! Pretty impressive for the just- turned- 30 –year-old!!!

WHAT BROUGHT YOU INTO THE INDUSTRY, AND THIS SPECIFIC CHOICE? DID YOU CHOOSE? OR DID THE JOB?

I started out doing my Bachelor of Science in Microbiology & Immunology at UBC when an Industrial Microbiology class taught me the basics of beer & wine fermentation. I thought it was the coolest thing I could do with the degree, and with my love for beer I knew I had found my calling!

What brought me to Big Ridge: having worked my first assistant brewing job at Yaletown Brewing Co. I always enjoyed the dynamic of the brewpub, so when the head brewing gig came up at Big Ridge I couldn’t resist applying for the opportunity! As a new brewer I’ve been able to work on my recipe development & explore my range in a fairly intimate setting, which is good for me at the moment.

WHAT WERE YOU DOING BEFORE?

Before I got into brewing I was a server in the restaurant industry for about 10 years. During that time I completed my B.Sc. Undergraduate degree at UBC and travelled the world.

IT SEEMS THAT PEOPLE THAT GET INTO THE MICROBREWERY BUSINESS HAVE PASSION-HOW DID YOU DISCOVER YOUR PASSION FOR BEER?

My love of beer started at a fairly young age, after growing up on Lucky Lager in Lake Cowichan on Vancouver Island it was my mom that introduced me to IPA. I thought the hops were just spectacular, and from then on I started branching out and exploring different beer styles as a hobby.  It didn’t dawn on me as a potential career opportunity for years after that.

Yes, I feel that our craft beer industry is a very respectful & an inclusive community.

HOW DO YOU FEEL ABOUT BEING A MINORITY FEMALE PRESENCE?

I feel proud to represent women in brewing! Overall, I feel like I have been given the same opportunities in this industry, regardless of gender.

I suppose being a woman can give you a different perspective in the brewery, but for the most part I think that people as individuals have different skill sets, work ethics, etc. which can give them a better advantage.

ARE THERE DISADVANTAGES OF BEING A WOMAN IN THE INDUSTRY?

It can sometimes feel like there’s a little extra attention because of my gender, but I really just want people to pay attention to my beer.  I also think what may deter some women into the industry is the physical aspect/heavy lifting portion of the job. While it’s obviously not as easy for someone of my size you learn the techniques around these obstacles and make it work.

I love the camaraderie; it is something I’ve always respected about this industry.  Also to have a job where you get to combine art & science is pretty awesome and always keeps things exciting. It’s definitely rewarding to have one of your own beers at the end of a hard workday.

I was part of the inaugural class at Kwantlen Polytechnic University’s Brewing & Brewery Operations program. Before entering the program I was in touch with local brewers about shadowing for a day to get an idea of the job. During my 2 years in the program I worked as an assistant brewer at Yaletown Brewing Co. & Bomber Brewing, both great opportunities with some talented brewers who have helped me get to where I am today.

My favourite is always changing as I brew new seasonals. Right now I’m really happy with the way my Blueberry Wheat ale has turned out, using fresh, local product is always enjoyable It’s quite refreshing! Another of my favourites was the Wrath of Brooks-Khan Belgian IPA collaboration I did with my mentor Tariq; the hop combination really complemented the Belgian yeast characteristics giving some delicious spicy, citrus & fruity notes. Plus it was my first beer on tap outside the brewery, at Alibi Room & 12 Kings Pub.

So many great beers, how do you pick a favourite?! One that always comes to mind locally is the Four Winds Berliner Weisse because it is just an awesome, quaffable summertime beer with the perfect amount of tartness.  Travelling out of country all the barrel aged sour beers at De Garde Brewing near the Oregon coast in Tillamook were just outstanding, I would highly recommend the trip out there!

Well I definitely look up to and respect all the women I’ve met in the industry so far! Rachaal Steele, one of my mentors at Bomber Brewing has always made me feel like I can accomplish anything and has been a great motivator for me, so she’s definitely up there on the list!

Becoming a head brewer in general is a pretty awesome achievement in my books! Also to have my beer on tap at the Alibi Room has always been a dream. I did get my first beer award this year as well, a silver for our Big Ridge 152 Lager in Vancouver Magazine’s International Craft Beer awards, so I’m kind of proud of that. I hope there’s more where that came from!

Lundy Dale
Lundy Dale writes for What's Brewing BC and Beer Me BC, and was a regular contributor to the now-defunct Taps magazine. She is founder of BC Craft Beer Month, and co-founder of the Canadian chapter of the Pink Boots Society, an international organization that supports women in the Beer Industry.