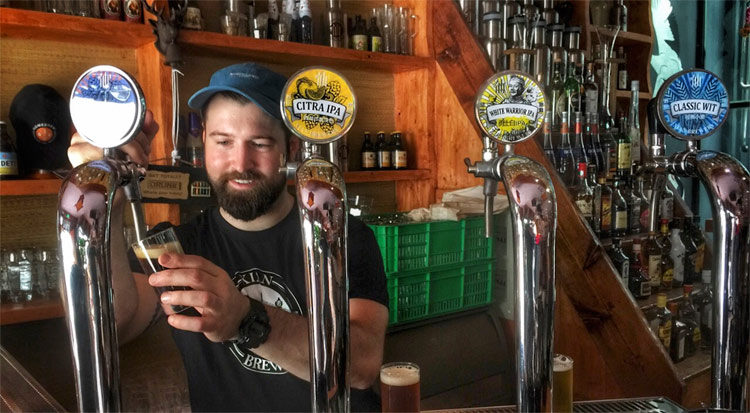 In the heart of China is the ancient silk-road city of Xi’an. According to Cultural-China.com it is one of the four Great Ancient Cities, along with Athens, Rome and Cairo. Nowadays it is most famous for the Terracotta Warriors as its number one tourist attraction. This archaeological gem is on most people’s list of “must sees” in China on a typical Shanghai/Xi’an/Beijing tour. Xi’an was the capital of China through 13 dynasties and was known as Chang’an (Eternal Peace) in historical times. With the new sleek HST trains it is only 6 hours away from Beijing or Shanghai. The ancient 12 meter high wall of the city has a circumference of 14.3 km; it takes just under 5 hours to walk around on the outer pathway. The wall has 4 main gates: North, East, South and West. Within the restored Ming Dynasty wall are traditional temples and markets that seem to resist the rapid growth that has overtaken many of China’s cities in the last 10 years. There is a moderately-sized Muslim Hui population that provides unique customs and flavorful food in the Muslim Quarter, street stalls and small restaurants around the city. The smell of far-eastern spices wafts through the air as you take in the sites. Stop by a food cart to taste spicy lamb skewers, lamb dumplings, BBQ squid, Chinese hamburgers and Eight Treasure Rose Mirror Cake, to name a few. The current restored city wall dates back over 600 years.

Just 300 meters from the city’s South gate is a wonderful opportunity to have a rest and treat yourself to some amazing craft beer. Opened a little over two years ago, Near Wall Bar & Xian Brewery has 5 taps of craft beer brewed on site. Brew Master Jon Therrian arrived in China 2 1/2 years ago and has just opened his second brewery in the arty and fashionable district of Qujiang near the Big Wild Goose Pagoda. Brewery Xian has a main floor brewery/taproom, an upstairs restaurant with 12 taps and full kitchen, and a third floor nanobrewery; everything is bigger and better than the original. 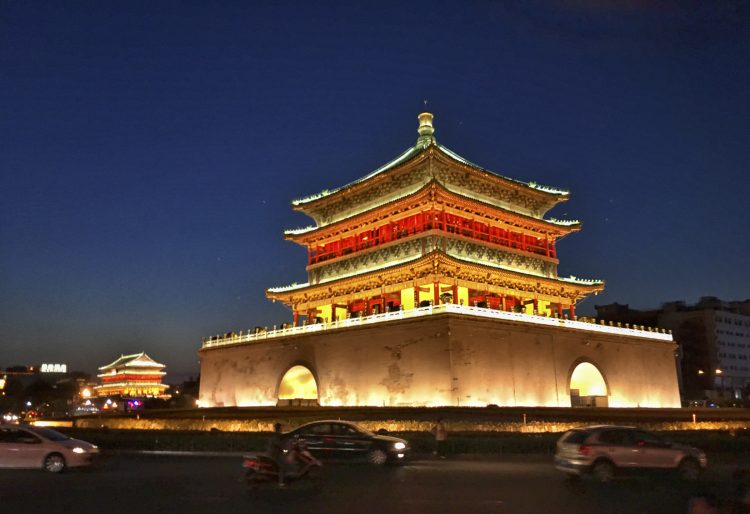 I was fortunate to be able to spend some time chatting with brewmaster Jon on two separate trips to Xi’an in the last year. My first meeting was at the original Near Wall Bar and Xi’an Brewery in September 2015. It was a busy day with brewing in full swing and a home brewers club weekly brew-up meeting happening at the same time. Jon’s roots are in Ohio where he started off his career by going to college to study finance and entrepreneurship – but the finance side wasn’t to be his lasting adult pursuit. Shortly after he finished college he ended up on the West Coast in Portland and found his passion. He loved drinking West-Coast craft beers and experimenting with his own home brewing. Through a friend’s recommendation, he decided to do a 15 week course at Brew Lab in Sunderland, North East England. Returning to his hometown in Ohio, Jon kept in touch with a fellow classmate from China, Xing Lei, who would eventually become his business partner in Xi’an. A few years later, while working at Cellar Rats, in Madison, Ohio, Jon received an invitation to go to China and make nanobrews for a 12 seat lounge. Two years later, he is serving up the best beer in Xi’an, with two separate breweries and 12 different beers. To ramp it up even more, Jon and Lei have partnered with a restaurateur, Zhang Huan, who has two Western style cafes producing the best North American menu in the city. While I was visiting the new brewery, I had a Mushroom Ham & Cheese burger with fries and a Cobb Salad. I would have to say it surpassed what I have eaten in local brew pubs in Vancouver. The new brew pub can seat up to 200 guests. 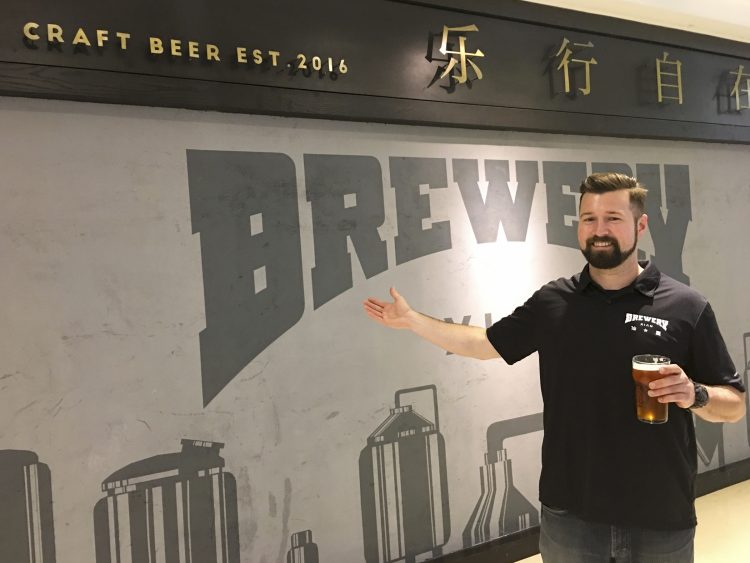 I was interested to find out how running a brewery in China works with a North American at the helm, relying on local talent to make it all work. Jon states “At Near Wall Bar we have a handyman and his wife that open up the bar every day. Slowly, but surely I let him do more and more and he has become a great brewer. Also another – a nineteen year old that works at the bar and can fix any motorbike – we brought him on and he is doing a great job. I think in another 6 months these guys will be able to brew on their own. I also run a Home Brewer club where we meet every Tuesday to make 20 litre brews, then on Mondays we taste it.” Ingredients and space are donated by Jon. He recently hired one of the club members as his chief assistant in the new brewery pub. Sounds like a win-win deal! 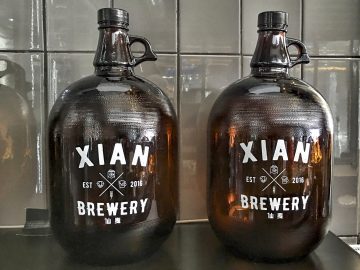 Craft beer in China is now found in many of the larger cities. I asked Jon about an overview of the craft brewery scene in China.  Jon replies “the craft scene is really moving along. I was just in Shanghai at the end of May for Shanghai Craft Beer Festival. People like Michael Jordan from Boxing Cat have been around forever – he has an amazing pedigree and is making great beer! Up in Beijing you have Karl at Great Leap who makes 15 beers and has 3 locations and then Slow Boat with Chandler. The guys that are doing it right – we know who we are. Craft in China is a little underground, but it is there, it is vibrant, and if you look around, you are going to find a lot of great beers. There is talk of an association to help people collaborate and work together. Individually we are all making beer in own cities really well – how do we make it accessible for people visiting – to get our beer there (Beijing) and their beer here? Drink fresh – drink local – local craft beer is healthy.”

I asked Jon about the technical side of brewing in China. “We are lucky the water is good in both of our bars. We had it tested – it doesn’t need much adjustment – we filter it also. The ingredients such as hops are now being purchased from Yakima Valley, New Zealand, and some parts of Europe. Malt is sourced from Australia, Holland and Germany.” Jon states that “as craft brewing gets bigger around the world the brewer needs to be more creative with the sources.” New Zealand produces lots of great hops – also he is experimenting with the best ways to use them. With his 60 litre nanobrewery,  Jon experiments with different recipes, which he serves as a limited release to test the market before committing to a 1000 litre brew. 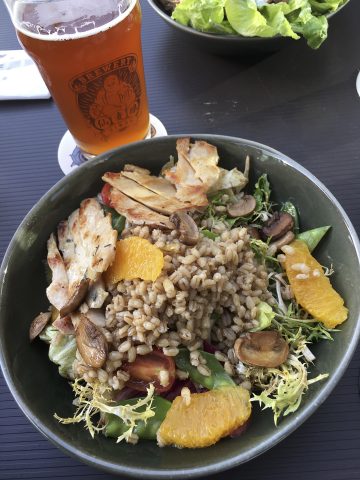 It seems to be a perfect mix of culture and craft beer emerging in China. A typical day of touring can start in the street markets that open at sunrise – having a breakfast of famous Xi’an street food, followed by sightseeing and lunch, then late afternoon arriving at a craft brewery for a tour and a flight of beer. Settle in for a pint or two of your favorite selections off the beer list and enjoy some music and great pub food.

During my visit to China I also traveled to Zhengzhou – a nearby city with a history going further back than Xi’an. In the museum I found a display of drinking vessels. A few looked like beer tankards from the Xia Dynasty (2070 bc – 1600 bc). Mmmmm… the Chinese brought us the Four Great Inventions: compass, gunpowder, writing, paper making/printing – could beer be the 5th Great Invention?