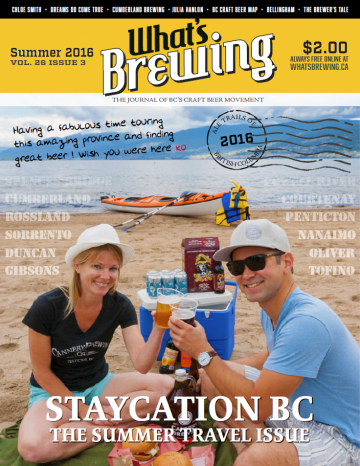 Yo! Editor Dave here with a What’s Brewing Staycation BC update live from the road.

As a BC craft beer journal, you’d expect What’s Brewing to provide you some on-the-ground insights re: what’s happening at breweries around the Province. In our Summer issue, we served up a batch of stories about the beer scene on the Island and Coast, featuring an ‘Ale Trail’ beer loop that a few of our regular writers travelled during the spring. Now, in the spirit of Staycation BC, we’re embarking on a much bigger loop: the entire South BC Interior, including the Thompson/Okanagan, Kootenays and Rockies regions.

Recently WB released a Google map that highlights BC craft outlets of all flavours, including breweries, cideries, distilleries, pubs, taphouses, bottle shops and a host of other hospitality and service providers. Since we eat (drink?) our own dog food here at WB, we’re testing the map out firsthand, specifically the giant loop you see here, formed by the Okanagan valley and towns East: 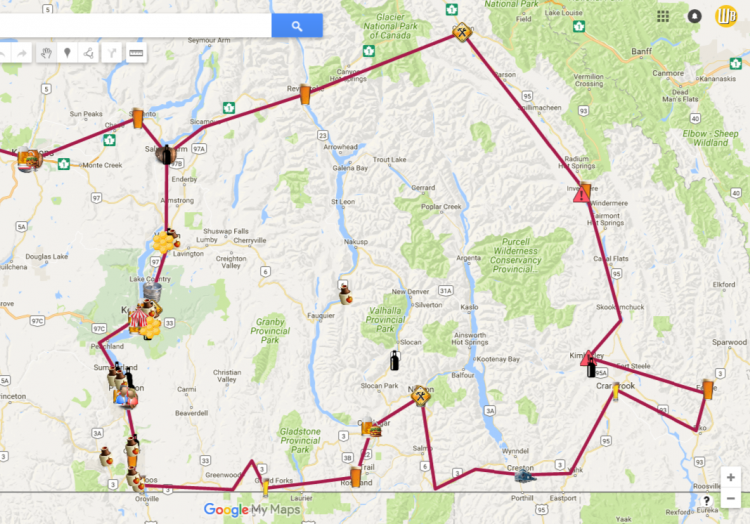 The giant South BC Interior craft loop: from the WB Craft Beer Map

One of the factors that makes this trip plan exciting is timing. We’ll be making connections at places like Crannog Brewing and Spencer Hill Cottage Brewery which aren’t open for tours every day. In the case of Spencer Hill, they’re only open four hours a week–Noon to 4 PM Saturdays–and by fluke (we won’t take credit for this bit of serendipity) that just happens to be when we’ll be rolling through.

We’re getting into Penticton at the tail end of Peachfest, and we’re rolling into Kelowna at the start of the Rock The Lake weekend. Although we’re just here for the beer, there’s no doubt that the Okanagan’s two major cities will be in party mode the next couple of weeks and that’s just fine with WB.

Actually this time around we’re here for more than the beer; as promised in this earlier story, we’ll be doing some selfless research into BC’s up-and-coming craft cidery scene, and there’s no better place to do that than the South Okanagan. Wineries move over; craft beer has been exploding in the OK Valley, and cideries are joining the party.

BC is at an all-time peak in terms of craft outlets, and we’ll be covering some that just opened in the last few weeks, as well as a few veterans that have been around the block and back. Stay tuned to our social channels and Fall magazine for updates from the road. Happy ale trails, BC beer lovers!