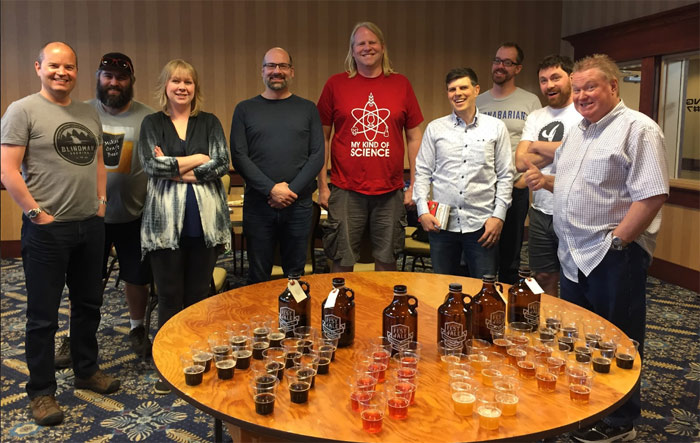 Okanagan Fest of Ale has been held for 21 years in Penticton, B.C., making it one of the longest running beer festivals in the Pacific Northwest. I’ve been going for over 10 years, although in the early years my reason for going was more to drink than taste. My style has evolved somewhat since those days, and so has the Festival, with booths featuring Palm Bay and Moosehead just fuzzy memories after renewed focus a few years ago on only featuring craft beer and cider. Having access to over 55 breweries is very exciting for us locals since, while craft beer is growing in popularity, it can still be hard to come by in the South Okanagan.

Last year I had the opportunity to get in to the industry pre-event, as a promotion for joining the local CAMRA branch. It was awesome – free drinks and no lineups! I instantly wanted to know how to be able to come back the following year, and learned that those doors were only open to reporters/bloggers and folks employed in the industry. Well the wheels started turning, and a few months later I purchased a domain name and launched a blog of my very own.

Early this spring I was contemplating volunteering at the Fest of Ale, in order to be able to pester a brewery with questions all afternoon. Instead, something happened to make my wildest beer dreams come true: I was asked to be a beer judge! I’m sure that, since you’re reading this magazine, you’re also a fan of craft beer, so you can probably imagine how incredibly excited I was.

Leading up to the event I tried to prepare myself by reviewing the Beer Judge Certification Program style guide, but found it a bit tough to retain. It’s ironic that reading material about perfect beers can be so dry. I asked the organizers lots of questions, and also connected with one of the other judges, Mike, to get some inside information on what to expect. I was a little nervous and wanting to make sure that as the youngest, and only female judge, I made a good impression. Overall everyone’s advice was that it was a fairly laid-back event and the other judges would help me figure it all out when I got there.

I did encounter one problem, and it was one of my own making. You see, as a judge you get free entry and free drinks on the Friday night event, as well as an invite to the after-party at Cannery Brewing, where the beer sometimes flows freely. Judging started Saturday at 10:00am, which is quite early if you’ve been enjoying yourself the night before. I knew going into the event that I needed to hold back from having too much fun, but sometimes you don’t know how much fun you’ve had until the next morning.  Morning came much earlier, brighter and louder than I was expecting. I hung in there, but the lesson was learned, at least for another year.

I headed over to the top-secret judging headquarters (a conference room at the back of the festival) to meet the other judges, some of whom have done the Fest of Ale event for a few years now. I was joined by Joe Weibe (Craft Beer Revolution), Jim Martin (Metro Liquor), Mike Garson (Mike’s Craft Beer), Jan Zeschky (Brewed Awakening in the Province), Jason van Rassel (The Daily Beer), Brady Strachan (CBC Radio), Jeremy Nemanishen (Craft Beer Vancouver) and Stephen Smysniuk (The Growler).

The process for judging was to split into 3 groups of 3, each group picking a winner from ⅓ of the total categories. For Best in Show each group picked the top 2 winners to put forward, which are then tasted by the entire group to pick a single, unanimous victor. All the beer entered was filled from the brewery booths, so the judges are drinking the same beer as festival goers. Keeping the top-secret beers organized was no small feat, and the volunteer judging crew – Warren, Kim, Chantal and Eric – were amazing at getting the job done!

Jeremy and Joe were my table-mates, and I quite enjoyed their company. They are both very knowledgeable, but in an easy-going way that helped me feel more comfortable about the whole process. Joe was especially helpful with several tips about the process for judging beer, and asked lots of thoughtful questions to help narrow down our top picks. We went through the samples on our own first, to try to pick out our best and worst of the category. I was pleased to see that, more often than not, my picks matched up with theirs. Once we had a few that we liked we went back for another taste and a discussion of the features we liked best about each beer before narrowing in on a winner for the category.

Our first category was the Pilsner/Golden Lager, which was difficult given that there wasn’t much to differentiate the 13 samples from each other. The next category, Amber/Dark Ale had a much wider range of flavours. This was also challenging, as what characteristics do you use to decide on a winner? Should it be based on personal taste, most stylistically correct, best executed or the one you could drink the most of? This question came up several times during our judging experience, especially when judging Best in Show.

We made quick work of the remaining categories for our group – Dark IPA, Stout/Porter and Sour – mostly because there were fewer entries in those categories. We selected the Dark IPA and Sour to put forward into the Best in Show judging. After this we had a break and hung out chatting in the hallway. This was probably my favourite part of the day as it’s not often I get to hang out with so many people who are as into beer as I am!

We reunited as a group of 9 with the monumental task of selecting the Best in Show award. Along with our group’s picks were a Wheat Ale, Pale Ale, Dark Lager and Blender – the “other” category which appeared to be a smoked ale. Again the process was to taste the 6 submissions individually, and then discuss as a group. They were all really great beers, but I really enjoyed the Pale Ale. As soon as I tasted it I knew that was the one I would pick! This was also preferred among the group, along with the Wheat Ale and Dark Lager. It was a tough discussion trying to determine which criteria should pick the top beer. The Dark Lager was interesting, but perhaps a bit much to have several of. The Wheat Ale was certainly sessionable, but while it was really well executed, it lacked a certain something to make it especially interesting. The arguments put forward by the judges were very articulate, and I almost found myself swayed more than once. In the end it came down to a vote, with 6 out of 9 judges picking the Pale Ale – which turned out to be Persephone’s Pale Ale. I think they are very deserving of the win, as their brewery embraces many values that are at the core of the craft beer movement. The other top selections were revealed to be Steel & Oak’s Smoked Hefeweizen, and Tree’s Dark Lager. Visit www.festofale.ca for the full list of winners.

Handing out the awards was our final role as judges, and I found getting to be part of the excitement of the winners to be very satisfying. After this we were released from our duties and returned to the festival as regular folk again. It seemed that the day was over so quickly, especially after so many weeks of anticipation. What made the biggest impression was all the hard work behind the scenes from the volunteers and participants. Judging beer was definitely the easiest job there. Everyone I met, from the judges to the volunteers to the brewers were all so friendly and welcoming. There was a real sense of community present and getting to be part of that was such a huge honour for me. Here’s hoping I get to join in on all the fun again next year!

Chelsea McDowell is the communications manager for CAMRA South Okanagan; more of her writing can be found at brewtifulbc.ca.