I asked my 3-year-old niece recently if she liked broccoli. With a disgusted look, she said, “broccoli is for monkeys and piggies.” OK, no kid likes broccoli; I was no exception. But there then comes a time when mom melts cheese onto the green veg for a special occasion, probably Thanksgiving. After that, broccoli is changed forever.

That’s kind of what happened between beer and me.

I live in Port Moody, which, for beer geeks in the know is an exciting topic. Before Yellow Dog opened up, the only time you might catch me drinking beer here was when Bud was on special at the Golden Spike (it’s now Brew Street, a craft taproom). To me, beer was broccoli; Yellow Dog came along two years ago and provided the cheese. Since then, Port Moody’s brewery scene has popped up guns a-blazing, making this Vancouver suburb a gold mine to craft beer drinkers.

Of course, the craft beer market is booming in all of BC and only getting bigger, so what makes Port Moody’s story different from anywhere else? 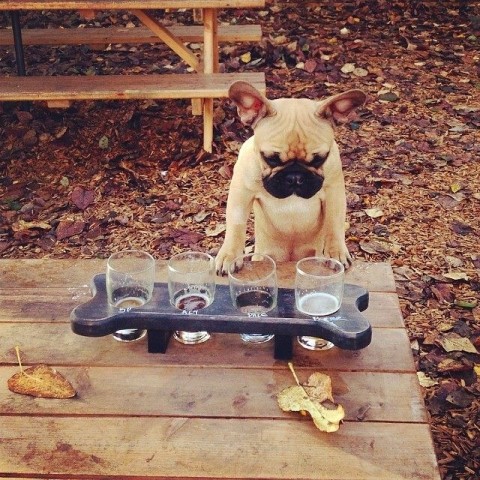 Diana Dilworth, Chair of Port Moody’s Tourism Committee, explains that the brewery industry grew very organically in the city and that “success has been dictated by the market.” Regarding tourism, she notes that PoMo is in the very early stages of a plan, part of which concerns a “brewery district.”

No kidding. For starters, how many
neighbourhoods have four breweries within a few blocks of each other on the same street? You’re looking at a six-minute walk from Twin Sails to Moody Ales, with Yellow Dog and soon-to-come Parkside Brewery in between. These breweries, along with adjacent retailers, operate in close proximity to the Rocky Point recreational area with its beautiful park space, a pier, a walking trail, a pool and more.

Have you ever heard the saying, “a home away from home?” Well, Port Moody’s expanding brewery strip is like a downtown away from downtown. With all that the brewery strip and surrounding Rocky Point have to offer, if you’re a Vancouverite you’re probably asking yourself: how do I get there. Now that I’ve convinced you to come try out PoMo’s craft beer scene, let’s discuss how to get here.

Do yourself a favour and don’t drive. The beers are so delicious that chances are you’re going to want more than one (if you’re anything like me). Luckily for you Vancouverites, Surrey folks and elsewhere, the Tri-Cities are finally getting a piece of the Skytrain pie. The Evergreen Line will be running through Port Moody with a convenient stop close to brewery row. Moody Centre Station will be pretty close to the current West Coast Express station—just by the over-pass leading into Rocky Point. The Skytrain line is set to launch in 2017, but in the meantime there are always buses.

Port Moody’s craft beer scene is booming, but what about the neighbours? Coquitlam, over four times larger in land mass than Port Moody and with almost four times the population, has yet to open a brewery. According to Statistics Canada, Coquitlam is the 6th largest city by population in BC. They have the people, so what’s the hold-up?

Coquitlam City Councillor Craig Hodge explains, “Cities determine land use via zoning, so that has been central to the discussion of craft breweries in Coquitlam.” Hodge adds that because “BC’s legislation has been changing as a result of consumer demand…Coquitlam has a blank slate [and] the opportunity to get it right.”

Although no formal decisions have been reached on permitting a Coquitlam-based brewery, there is a name you might have read about. The Province’s “Brewed Awakening Guide to B.C.’s New Breweries in 2016” includes Prototype Brewing Company in its list and assigns the brewery’s address to Coquitlam. How exciting!

One of the amazing things that makes these particular breweries noteworthy, Dilworth says, is that they are “so willing to work with the community in business and charity.” One of their most recent collective efforts was a local contest asking artists to design a label for a beer that they collaborated on.

You can’t help but say nice things about these brewery owners. Last year, Moody Ales co-owner Adam Crandall worked with me personally, giving a budding journalism student hours of interview time as I covered his journey and the brewery’s. These guys really do give back and care about their communities.

Cody Allmin, Co-Owner and Director of Marketing and Sales at Twin Sails, Murray Street’s third brewery, says they were lucky enough to come into a scene that already had a good foundation and “craft/artisanal focuses”. He looks forward to the upcoming Skytrain connection to Rocky Point, as well as to Parkside Brewing’s arrival.

Vern Lambourne, Partner and Head Brewer at The Parkside Brewery, set to open this Spring, thinks that “Port Moody has the potential to become a destination for beer lovers from all over the Lower Mainland.” On breweries in the area, Lambourne says, “If we get a few more, that could really put a spotlight on the brewing scene here. Competition isn’t a bad thing as it forces us all to be better.