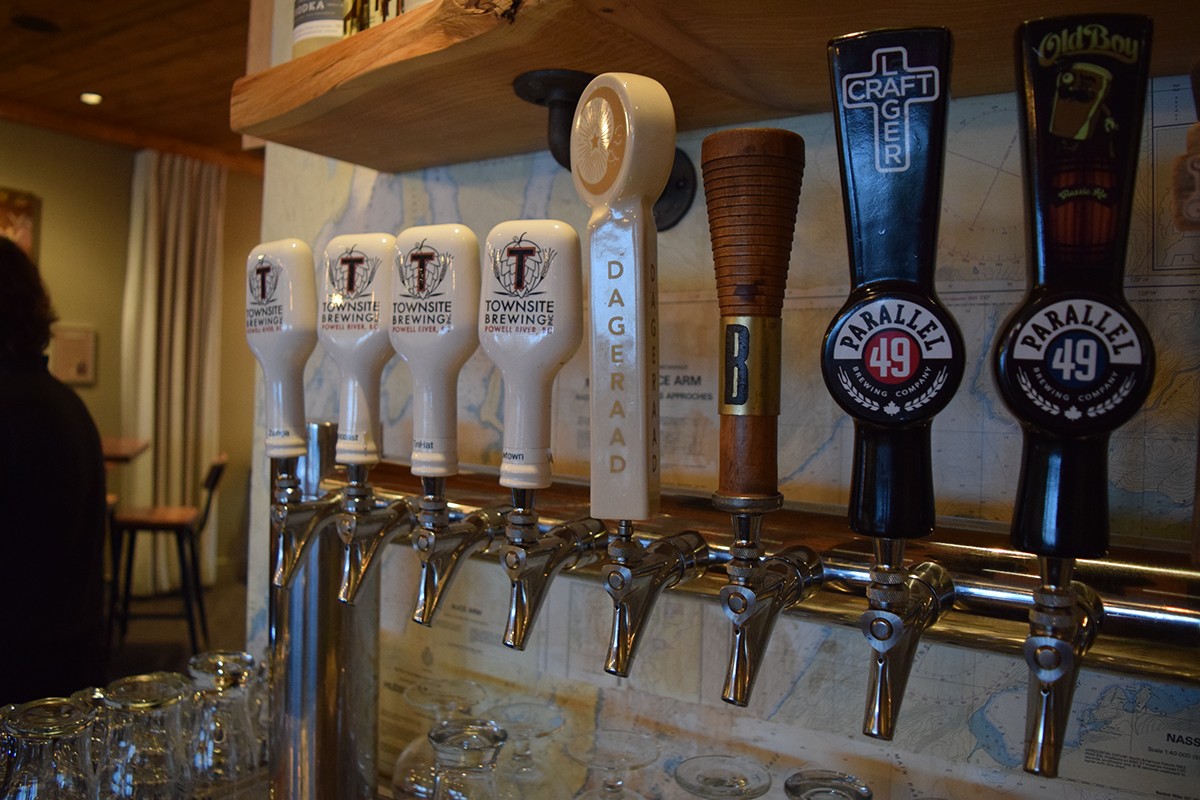 For many craft beer lovers in urban areas, having an almost-overwhelming selection of great BC beers to choose from is a given. When I lived on Commercial Drive in Vancouver, I had both St Augustine’s, with their (at that time) 40-plus taps, and Tangent Café, with their 14 taps, within 300 metres of my front door. Not to mention that I had two amazing, craft beer-oriented private liquor stores within five minutes’ walk stocking hundreds of great craft beer selections.

When I decided to move the family to Powell River three years ago, I knew Townsite Brewery was brewing solid beers, but I also suspected, due to the isolation of the place and the fact Powell River is a mill town long accustomed to drinking mainstream lagers, that my craft selection would be severely limited. I was pleasantly surprised that Townsite’s beers were available almost everywhere from the local bowling alley, to the Legion to my local dive bar which features only two taps (one being Blue) but as I suspected, variety beyond the local brews and macro-lagers was nonexistent.

Fast forward three years and I have to say the Craft Beer Revolution is alive and well in PowTown, and if variety is the spice of life, things are beginning to heat up here in a town that is much more diversified and open minded than outsiders would imagine.

When CAMRA Powell River was founded in 2013 and started to advocate for getting more variety in town, I can remember locals asking me if I was not worried that Townsite would be angry with me for trying to talk my brewery friends from the Lower Mainland and Victoria into getting their beers on the liquor store shelves and pouring from local taps. Little did these folks know that Townsite Brewery was working with me to bring their craft cousins into the local market and were keen to get more variety in town.

“I believe competition is healthy,” states Townsite’s Director of Sales and Managing Partner, Michelle Zutz. “I believe it [competition] makes us better and is good for the consumer as well. [It] gives folks more opportunity to try what is out there, and gain an opinion on craft product, which in turn helps all of us.”

To help foster this attitude of healthy competition, as well as to introduce some of their BC craft beer peers to Powell River and their beers to local consumers, Zutz and the rest of the Townsite Brew Crew, along with CAMRA Powell River, promoted and participated in a series of events last Fall at a local pub, Savoury Bight, entitled Beer Wars.

The event saw Townsite invite a rival brewery to town to pit one of their beers against a Townsite beer, head-to-head, in a blind taste challenge, with the winner being judged by those in attendance. At stake were bragging rights and a tap in the pub for the next month. The events proved overwhelmingly popular, with each of the four events in the series selling out. The visiting brewery personnel were somewhat surprised by the support for the events and how vibrant the craft beer scene is in Powell

River, and all now have their beers on local beer store shelves and have had their beers poured in local craft-friendly establishments.

One of those local craft beer friendly establishments is The Coastal Cookery, located on the south end of the main strip in town on Marine Drive. The eatery is relatively new, having opened its doors in June 2014, and features ten draft taps, making it the biggest draft selection in town. Coastal has quickly become the go-to place for visiting craft beer aficionados wanting to dine out. It is the first place I recommend to my craft-loving friends and the great menu and amazing view only enhances the experience and to date I have had no complaints about the recommendation.

Coastal started out somewhat conservatively, with all Townsite taps, but has slowly-but-surely branched out. Their current tap list includes offerings from Brassneck, Dagaraad and Parallel 49 (two taps) as well as Townsite (4 taps), Merridale Cider and a locally produced Raincoast Kombucha for those wanting something non-alcoholic. Coastal has also had beers from Storm Brewing, Hoyne, Red Truck, Persephone, Whistler and Driftwood and all have been well received. It may not sound like much to the jaded and spoiled Vancouver craft beer crowd, but considering there was virtually no craft beer in town four years ago, having such quality brews on tap is really attracting attention in town.

“Customers were asking, so we listened” explained Coastal`s owner, Sarah Salome. “Although the town is very loyal to Townsite, the craft beer opportunities from around BC are endless, and our guests wanted the opportunity to try other small breweries on draught as well as Townsite.”

Salome stated ”it is not easy at times to get smaller craft breweries interested in supplying beer to Powell River” but with some help from Townsite Brewery and CAMRA Powell River, they have managed to make connections.

“Townsite Brewing is so supportive of craft beer in BC they have helped us with introductions in the industry and really put us on the map as a craft beer community,” she continued..

Just around the corner from Coastal, another relatively new business has embraced craft beer fully and completely. Duke’s Liquor Store opened in August of 2014 and initially had only about 30 craft beer SKUs available in their massive store. Today Duke’s boasts more than 200 craft beer selections, including some of the hottest limited releases in BC, and features BC beers heavily, with more than 20 BC breweries represented.

Duke’s has been totally open to bringing in new breweries and has expanded their craft focus to BC ciders and artisan spirits. Manager Evelyn Vajai has been working closely with CAMRA Powell River to help build their BC craft beer portfolio and Duke’s has a selection that could hold its own in the big city.

“We continue to grow with the increased interest in all craft brewed products,” states Vajai who often brings in craft beers for regular special tastings to help introduce locals to different brands and beers.

“The end of craft beer is NOT near,” proclaimed Vajai who has plans to further increase her shelf space to bring in a bigger craft section.

There are others catching on and craft beer taps and beers from around BC are showing up around BC. The local BC Liquor Store has a decent selection and they continue to tinker and bring new products in to try when they are requested. I have heard there is a plan to open a 24-tap establishment and there is chatter about the need for a brew pub in town. Capone’s Liquor Store is also bringing in great beers and open to testing the market.

It will be interesting to see where Powell River is in another three years and it is exciting to be a part of this growth and discovery that is occurring locally.

“Next we need a brewpub in Powell River; the town is crying out for it,” states Zutz, secure in the fact that Townsite is fiercely supported by locals.

She is even touting she will be first in line, but knows she will have to be fast as I will be racing there at the speed of light to welcome the new brewery to town the minute it opens its doors.