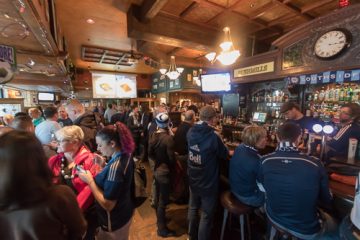 Formerly known as The Cellar, the room underneath Doolin’s Irish Pub was re-introduced in 2014 as the craft-forward Belmont Bar. We touch base with Marketing and Partnership Manager Kate Bobroske to learn more about the crossover between craft beer and sports at Doolin’s and The Belmont.

WB: Doolin’s is well-known as the home of the Vancouver Southsiders, as well as being home to other sports fans. How important is this type of community involvement from your group’s point of view?

Kate: Community involvement for us is very important.  We are a family owned business and our owners reside in the area, they love it when our venues have a chance to bring people together to support something so positive as sports in Vancouver.  We have been the pre and post-game meeting point to the Vancouver Southsiders since the beginning and we always try to make them feel at home in our venues.

WB: What motivated the change to a craft-friendly tap lineup at The Belmont, and how has the reception been?

Kate: To be honest, we love craft beer ourselves and we just really wanted to create a venue that we wanted to hang out at and that we believed in 100%.  We are constantly rotating our taps to keep them interesting and fresh (while keeping our guests’ favourites of course), so every time you are in there is something new and exciting to try.  So far, people LOVE it!  We have had nothing but positive feedback and surprise from people when they realise what a large selection we offer.  We are proud to say that we offer the largest draught craft selection on Granville Street; something that we feel the area was missing. 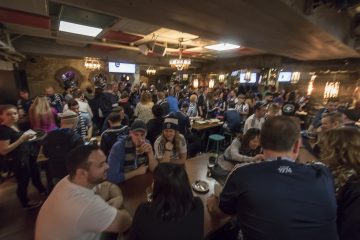 Downstairs at The Belmont Bar

WB: Soccer fans in the UK often visit the pub before matches, and beer is an integral part of football culture there. Would you say that Whitecaps fans tend to be beer-focussed drinkers as well?

Kate: Absolutely.  I think it is part of the Southsider culture.  Everyone gets together pre match at our venues, connects with one another over a beer (or three) 😉 and gets excited for the game.  When they all march to the game from here, there is a real sense of community and fun.

WB: Have you perceived any difference in beer preference – ie, craft vs. macro — between soccer supporters and other sports patrons (eg, Canucks, Lions, NFL fans)?

Kate: I think Vancouver in general is becoming more craft focused, there are so many wonderful beers available now, so there has become a real interest to seek out variety.  I would say that soccer fans are probably the most craft focused of the three though.