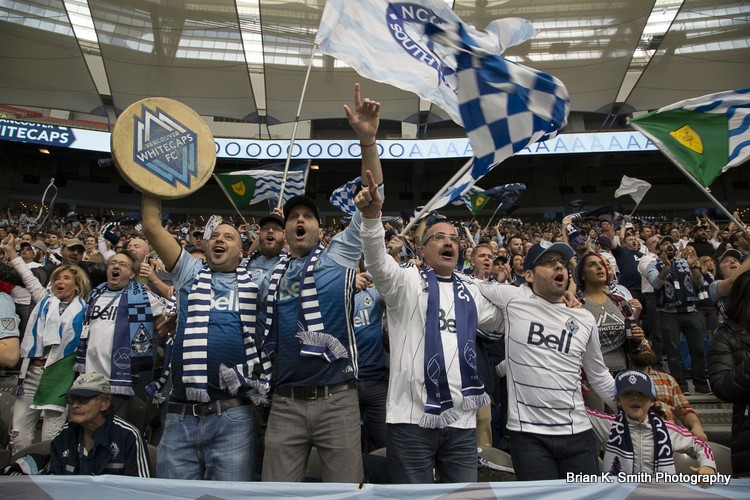 Craft beer: on the bench and watching from the sidelines

Everybody knows that beer is married to sports. The historic correlation between the two is obvious; sponsorship of about every pro sports team in the Western world by giant beer companies is a given. Depending on your age, you’ve seen decades of marketing featuring ex-jocks who will gladly tell you the right beer Tastes Great and/or is Less Filling.

That, of course, is a Big Beer concept. We little brewery fans reject such notions. But professional sports hold a prominent role in our society, and I myself am a fan. So I have to question whether the culture of the modern craft beer movement that I love is aligned with the big-league pro sports that I also love. 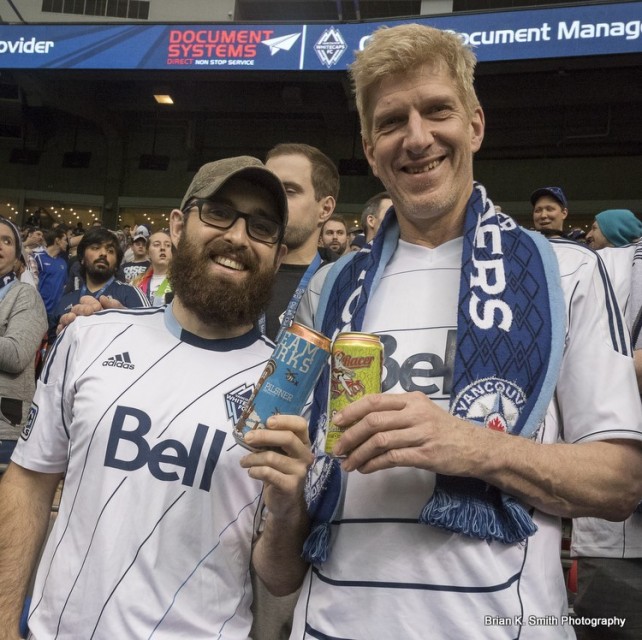 Many in the craft community would say no. Vancouver’s Alibi Room famously rejected sports bar culture by refusing to bring (working) televisions into the bar. Cumberland Brewing on Vancouver Island has done the same. In their funky tasting room, that might be typical of what you’d find in Portland, mounting flatscreens was a non-starter. The topic came up and was settled instantly; it would have ruined the vibe.

People aren’t complaining. A random sampling of millennial hipsters and beer nerds hanging out in the taproom at 33 Acres will probably not turn up a lot of BC Lions season ticket holders. It’s not just the new, young end of the hardcore craft crowd either; I noticed this about most of my Gen-X foodie-type beer friends at least a decade ago. The folks at the core of the artisanal food and beverage movement are not typically the WrestleMania or monster truck show types. Riding a bicycle or hiking might be of more interest to this crowd.

Aside from cultural taste, another reason craft breweries might not inspire a mental association with big-league sports is down to their inherent commercial limitations. Tiny businesses don’t pair well with giant sports leagues. It’s natural that small breweries who want to support local athletics and market themselves in the process would choose to align with amateur or semi-pro sports teams. A good example of this is Portland’s BridgePort Brewing, which sponsors minor league baseball’s Hillsboro Hops. They certainly couldn’t pay to play as the primary beer brand for a Major League Baseball team.

However, there’s one North American sports circuit that manages to legitimately brand itself as Major League, yet still happens to be somewhat more accessible to craft breweries due to its smaller scale. Serendipitously, its audience almost perfectly intersects with the demographic of the craft beer movement. The football they play is not the customary North American variety, but it’s the sort that the folks behind the counter and in the brewhouse of some of BC’s best-known craft breweries are rooting for.

It eventually made sense to me. There’s a certain trendiness about both craft beer and the Whitecaps (actually, MLS soccer in general). Both are continuing to grow steadily across North America, and both are trending strongly with millennials. In Vancouver and across BC, growth has been very strong over the past five years, with both the Whitecaps and the craft movement appealing to the same critical young adult demographic that ensures continued support.

Over time, I have also casually observed that soccer supporters are slightly more particular about the type of beer they’re drinking than are traditional North American sports fans. Other people have noticed, too. Ben Keene writes in BeerAdvocate, “Across the country, supporters of Major League Soccer seem to pay particularly close attention to the beer selection at their stadium.” Daniel Wiersema, founder of a soccer advocacy website called the Free Beer Movement, says “The fan is demanding more than just watered down macro brews while they’re enjoying a game… The people that are filling MLS stadiums are intensely local—they’re holding a scarf with their local colors in one hand and a pint of local beer in the other.”

As Jason Notte writes for MarketWatch, “Craft brewers have long known that…MLS fans love their beer. According to Nielsen, millennials account for 35% of all beer consumption and are 26% more likely to drink a craft beer than the average U.S. beer drinker. They’re outdone only by Generation X, which drinks only 21% of all beer but is 28% more likely than the average beer drinker to grab a craft beer. Those two demographics overlap nicely with MLS.

“For craft brewers, an MLS partnership provides a footing on a professional sports landscape that generally treats them like third-class citizens. For MLS, it provides strong local ties to a league still building itself one boisterous market at a time. For both, it’s a way of tapping into a young audience that still evades most of their competitors.”

So craft beer and soccer are both trending upwards, and their growing young audience is great for marketers. But is there any deeper reason that the two are culturally linked, here in BC?

I’ve long felt that a reason for commonality between soccer supporters and craft beer enthusiasts can be traced to their heritage. There is a direct and undeniable British connection in the history of both pursuits in BC, and it’s blended with a Pacific Northwest/Cascadian focus in a way that doesn’t occur with other pro sports or adult beverage categories.

History fans will recall that all of the US Pacific Northwest was British fur-trapping territory pretty much up until the founding of our province, only a century and a half ago. This goes a long way toward explaining the shared values within our unofficial nation of Cascadia, distinct from the rest of North America. Unlike in Washington and Oregon though, the UK/Commonwealth connection persisted in BC such that when the craft beer revolution began, founding fathers (e.g. John Mitchell) were likely to be influenced by what they’d witnessed in England first, then ultimately the US West Coast second. Our primary organized craft beer enthusiast group, CAMRA BC, gained inspiration directly from the UK movement, resulting in the prioritization of cask culture and the cask-based format of BC beer events that isn’t typical across the border. We have our very own mix of UK and West Coast here.

Correspondingly, it’s easy to spot the British connection amongst footy fans. When you spend time hanging out at soccer games, you hear the accents from time to time, a reminder of where the game comes from. Indeed, the game-day supporter experience borrows from UK pub culture. On a typical Saturday match day, English footy fans will gather before the game at their local, walk to the field where the game is held, then return to the pub after. Beer is an intrinsic part of the football supporter’s life. It’s a traditional pastime, and many like to enjoy it traditionally, with a pint of ale in a glass rather than a frosty bottle of Bud.

What makes BC soccer supporters simultaneously Cascadian is that their primary rivalry vector is North-South, up and down Interstate 5 connecting us with Seattle and Portland. Unlike hockey and football, soccer here is a Northwest affair first, the rest of North America second. It’s an old English pastime with a West Coast ethic, just like our craft beer movement.

In soccer culture, ‘supporters’ refers mostly to those hardcore fans that have chosen to align themselves with an established fan group, a UK tradition that has long taken root amongst North American soccer club followers. Supporter groups are very active and vocal during a game, typically choosing to stand, sing, chant, wave flags and vigorously hex the opposition during play.

The three established supporter groups for Whitecaps FC are the Vancouver Southsiders, the Curva Collective and the Rain City Brigade. All th
ree groups occupy an end zone at BC Place; somewhere in the Southsiders’ portion  is a so-called Brewers’ Row where a number of the aforementioned craft beer professionals have clustered their season tickets.

Supporter groups are a hallmark of soccer culture that differentiates the soccer match-day experience from attending, say, a Canucks game. Indeed, Mark Daley of Vancity Buzz noted recently that “At Rogers Arena I feel like a spectator, and unless it’s an especially intense game I don’t feel that much more involved than watching at home”. He contrasts this with the non-stop involvement at ‘Caps matches. Indeed, a small group of Southsiders experimented by attending a Canucks game in character, standing in the uppermost seats and chanting during play. It was not well received by some of the neighbouring patrons, for whom standing anywhere and making noise during play is highly irregular. Having said that, the Canucks and some other NHL teams are aware of the value of encouraging vocal support, and are starting to look into creating a section for similarly enthusiastic hockey fans.

The rise of the Whitecaps

The Canucks have reason to look at the Whitecaps for inspiration. Along with fellow veteran sports franchise BC Lions, they have been on a downward trend in performance and attendance since 2011. Contrast this with a steady rise in popularity and success for the ‘Caps, who entered Major League Soccer (MLS) that same year. In particular, the Lions are looking over their shoulders, as the former third banana has caught up and begun to surpass the Lions in game-day attendance. In 2015 this caused the Leos to take a page from the ‘Caps and limit attendance to just the lower bowl of BC Place Stadium. In contrast, the Whitecaps are starting to look into increasing their seat availability for certain games.

Multiple observers have commented on their general perception that soccer is the new, sexy game in town, and that the other football audience is aging. According to Tom Mayenknecht for the Vancouver Sun, “Independent sponsor research shows that Whitecaps fans are younger and more urban. Fans of the Lions have become older and more suburban”. As somebody who has supported both, I would have no argument with that. For younger adults, the darling demographic of the corporate marketer, soccer is where the growth is.

AB InBev estimates that 44% of coveted 21-27 year old Millennials have never tried Budweiser. Young adults today are fortunate enough to come of age in an era when food and beverage choices are much more enlightened than they were a generation or two ago. Craft beer is ready and waiting for them, and they’re slurping it up. Centerplate officials in Seattle’s Safeco Field said craft beer brands outsell the larger domestic brands by a four-to-one ratio. That estimate will certainly include ‘crafty’ and non-independent labels, but it underscores the desperation that Big Beer is starting to face regarding major labels like Bud.

Beer giants have traditionally tied their marketing to major league sports like baseball and hockey, but they’re looking for ways to reach the young consumer and MLS is one of those ways. Nielsen’s ratings show that viewers aged 21-34 make up less than 17% of baseball’s viewing audience. MLS broadcasts draw comparatively small viewing audiences, but 51% of its viewers are age 34 or younger. Meanwhile, its average gameday attendance beats the attendance of indoor arena sports like NBA and NHL (Whitecaps are dead average for MLS, at just over 20,000  per game; average for hockey is more like 18,000). This is low-hanging fruit for marketers, and implies good things for soccer’s future.

In Part II, I’ll discuss the history of craft beer in BC Place, including the fascinating Russell Brewing experiment—perhaps the only instance in Canadian history of a giant stadium awarding their primary beer contract to a local craft brewery. It all leads up to where we are today and where Vancouver’s sports teams and arenas could be going in the future. But first, for more on that, we now turn the mic over to our pal Rebecca Whyman.