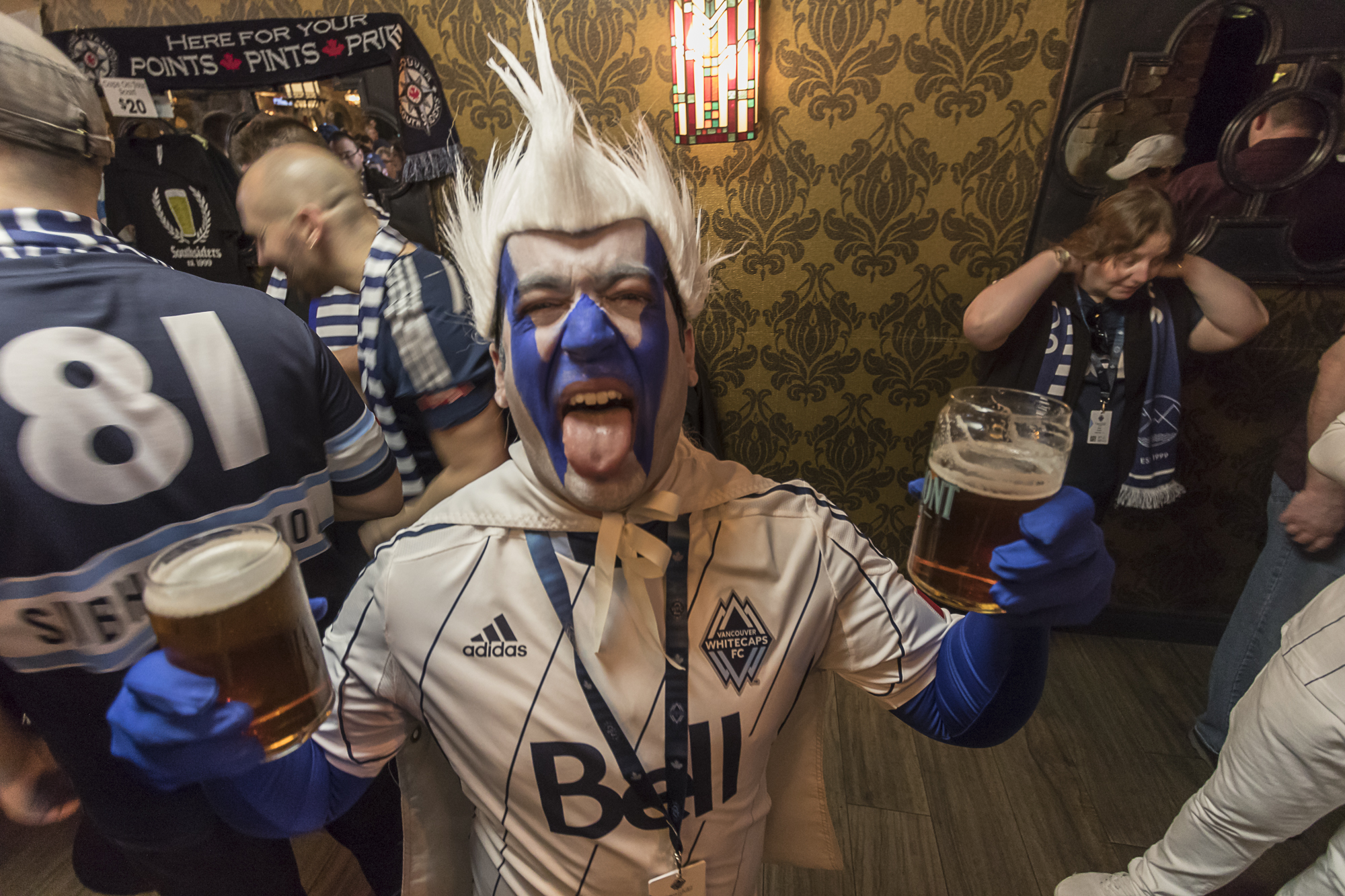 In Part I of Beer League, we discussed how Vancouver’s Alibi Room famously rejected sports bar culture by refusing to bring (working) televisions into the bar. They weren’t alone; try walking the Yeast Van circuit (OK, yes, you can use your bicycle) and look hard for a flat panel TV. Sorry, no Nascar for you.

Of course, you wouldn’t be looking for those TVs, because ‘Sports Bar’ isn’t what you think of when you picture the new wave of craft beer tasting lounges. Despite the prominent place professional sports holds in Western society, the modern taproom has evolved as an oasis of urban culture bereft of good ol’ hockey fights on Saturday nights.

But then, why would you go to a craft beer bar if you were looking for sports? Surely, nobody with sufficient taste so as to crave the finer beers in life would wish to waste valuable brainpower on the Nashville Predators. Not to mention the utter un-sociability of two friends staring at a wall-mount rectangle when they could be pretending to show interest in each other’s lives (all the while gazing into the rectangle in their right hand, but that’s not germane here).

That last paragraph contained a question. The answer: it turns out that there are humans out there that actually enjoy BOTH OF handcrafted ales and big-league sporting entertainment. Witness the testimony of Paul Sabourin-Hertzog, Director of Internal Communications with the Vancouver Southsiders, the original supporter club for Whitecaps FC. He is active on both fronts. Where do folks like Paul go to get hopped-up libations along with their game-day elations and frustrations?

It’s well known that the Southsiders meet before games at Doolin’s, an Irish pub and sports bar on Granville Street. In 2014, the business group that manages Doolin’s (and associated properties) rebranded the room underneath, formerly The Cellar, as The Belmont Bar. The Belmont’s gentrified tap lineup is aimed more accurately at many of the folks in our supporter group who enjoy better beer. Doolin’s itself is still packed on game day, but the discerning drinker can often be found downstairs at The Belmont enjoying the expanded craft tap list and more knowledgeable beer service.

Other noteworthy Whitecaps supporter pubs have included Mark James Group’s Big Ridge Brewing in Surrey–formerly the South Of Fraser home of the Southsiders–and Devil’s Elbow Alehouse, a property of Howe Sound Brewing, recently doing similar duty for the Curva Collective. Of course, since those two locations are owned by brewers, beer selection is not an issue. Rain City Brigade, the ‘Caps’ third fan group, has tended to meet at Library Square. Victoria fans have often met at Yates Taphouse. All of these are great options with respectable tap lists.

OK, so that’s where some of the soccer nuts meet. But soccer nuts are eccentric and fussy. How about regular blue collar guys that like wrestling? How about the sports you like (if you’re thinking hiking and racquetball, you’re not following me: we’re talking pro sports on TV here)? We can’t tell you to not watch your UFC at the No. 5 Orange or Shark Club Vic, but we can tell you that there are other craft-savvy options that pack a flavourful punch on game day or fight night. The trick is to find a place that both knows their craft beer selection and understands the sports fan.

Armin Sodhi co-founded 12 Kings Pub (12th & Kingsway, Vancouver) in Fall 2014, precisely because he saw the need for a place that is good at both. The bar under the old Biltmore Hotel was in need of new ownership a few years back, and Armin’s ownership team made the move based on a vision of a sports bar with nothing but craft beer. This gritty East Van location has never been associated with the type of clientele that patronizes nearby Mount Pleasant outlets like 33 Acres and Brassneck. Sodhi and gang decided to keep the blue collar vibe going by retaining the pinball machines and dark tavern interior theme, completely anathema to the modern craft lounge ethic. The crowd that comes there loves it.

A similar, even more extreme, experiment was conducted at Amber Jack’s back in 2009, in the hotel formerly known as the Surrey Inn. Alongside beers from nearby vendor Russell Brewing, AJ featured kegs from import Brooklyn Brewery (!) alongside many outstanding BC brews. The clientèle never did fully adopt the new beer list, and that outlet has since closed. Yours truly has amusing memories of having to explain the tap list to one unforgettable server, who was unable to conceal her loathing for the new, snobby savoir bière approach.

Of course, given that we’re currently enjoying a craft beer revolution, most pubs and bars in North America are at least aware of the trend, and many if not most have begun to shift to upgrade their beer menu. Malone’s Social Lounge and Tap House in downtown Vancouver has made the strategic move of changing their website’s title, as displayed in Google’s listings, to “Malone’s Sports and Craft Beer Bar”. Clearly the move is on in the massive sports-friendly pub and bar sector to appeal to changing tastes of beer drinkers, likely driven by the need to please the fickle but crucial Millennial audience.

It would be simple to conclude that there’s no need to call attention to outlets like those above simply based on the existence of TVs and craft taps, since hundreds of places in BC now have some of both. But for the true sports fan who’s also a savvy beer hound, “some” isn’t enough. Fans want the sound on during games, with lots of TVs, channels and beers to choose from. Malone’s claims “38 Rotating Taps”, which is likely enough to make the sporty craft fan happy. Other chains like Donnely Group and Joseph Richard Group are doing a great job in some properties as well. Most sports bars are still feeling their way.

12 Kings, with 12 taps dedicated to nothing but craft, is an example of a location that’s walking the talk. Customer education is part of the burden, and they’ve accepted it. Big Ridge in Surrey, with only the house brew on tap for lager, knows all about this as well. The Belmont, connected with sports bar Doolin’s upstairs, is a similar proposition. Sacrifice is involved on the part of the brewery or bar, because one can’t expect long-time patrons to adapt their palate to suit what they might perceive as some hipster trend. Raise a glass to these pioneers who have recognized that leading the way with a craft-focused beverage lineup is worth the investment.