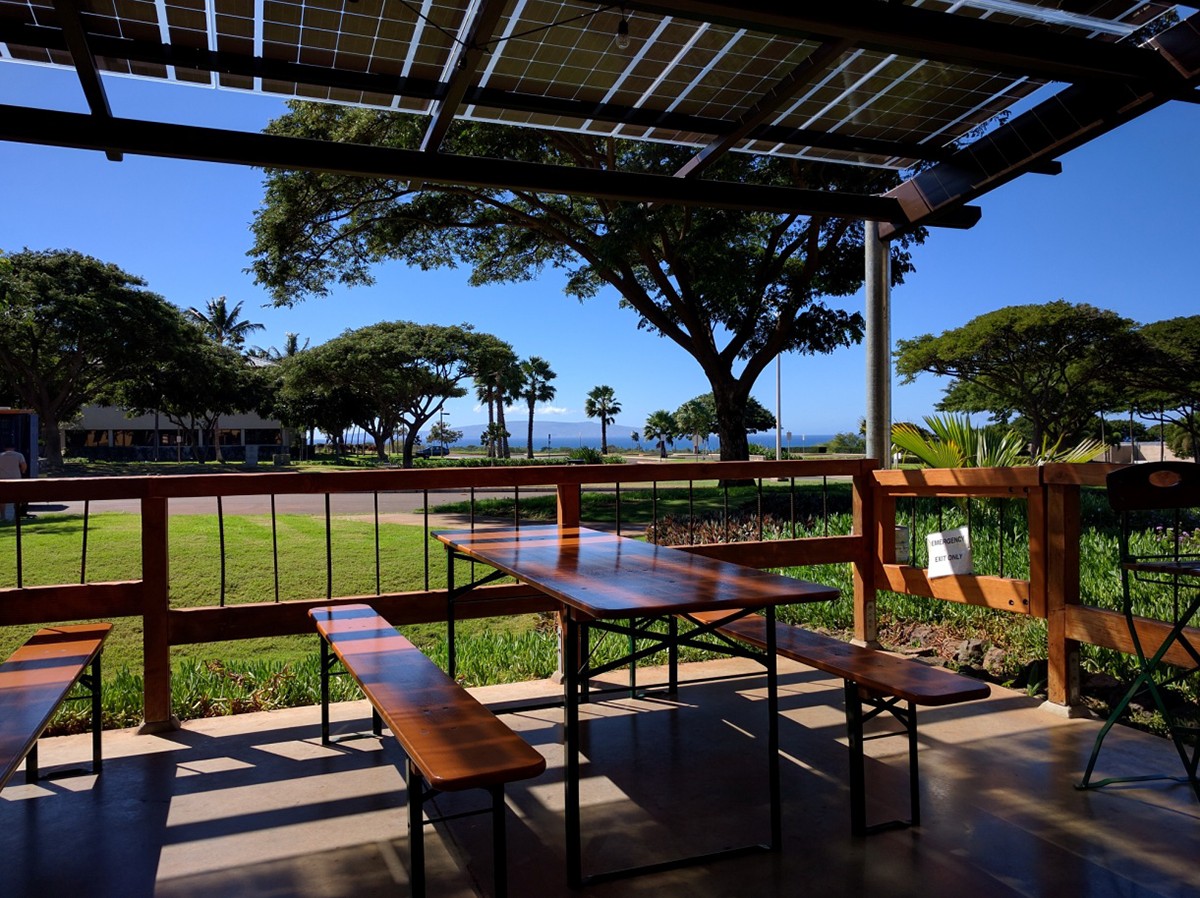 On a recent trip to Maui I was delighted to discover not one but two craft breweries in full production.

Maui Brewing Co. is well established and known all over Hawaii and beyond. The brewery was started in 2005 by ex San Diego native Garrett Marrero who spotted the one thing this beautiful part of the world was missing – lovingly crafted beer. Maui Brewing Co. (MBC) has recently moved brewing operations from its Lahaina brewery to a beautiful new facility in Kihei. This is a very large brewery compared to most Vancouver craft breweries and is beautifully designed with a gorgeous tasting room and a patio with views down to the ocean. MBC offers a very wide range of beers including lagers, ales, wheat beer and their famous Coconut Porter. After sampling a number of the beers on tap we settled in on the Lahaina Town Brown a very decent brown ale with a pronounced malty flavour. Also of note was a brand new porter, Ka’anapali Coffee Porter – the coffee tones were clearly part of the beer without being overpowering. 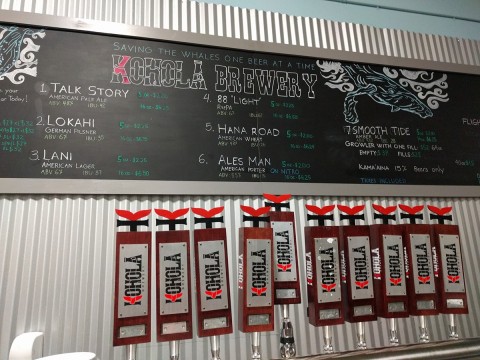 The brewery tour was very informative and entertaining. Everything about brewing is challenging on Maui which after all is a tropical island located in the middle of the Pacific ocean, thousands of kilometers from the mainland. Sourcing the ingredients is a huge challenge. Neither barley nor hops are grown in any quantity in Hawaii and so they must be imported from the mainland. There is some potential to grow a limited quantity of hops on Maui in the cooler so-called Up Country region – literally half way up a volcano but this is not an economic proposition at this time. So the brewers depend on imported pelletized hops. Yeast has been imported too, although the design of the new brewery included a small laboratory which has allowed for the culturing of yeast in-house.

Getting their hands on good ingredients isn’t the only difficulty that Maui’s brewers face. Maui is hot (duh!) so brewing lager with the requirement for cool storage through the slow fermentation provides a particular challenge. This is solved with insulated dual layer fermentation tanks. And it also explains the highly-visible and well=labeled glycol pipes running around the facility.

You will find Maui Brewing beer all over the island in restaurants and bars. However, MBC is an ambitious brewer and figured out early on that sales growth would depend on finding and developing an overseas market for their beer. To ship their beer long distances and have it arrive in good condition MBC decided to focus exclusively on cans over bottles. Cans have a number of advantages relative to bottles including being easier to cool, lighter and therefore cheaper to ship and better at preventing spoilage via oxidation and/or excess light hitting the beer. The beer is canned on an automated canning line and loaded directly into refrigerated shipping containers. Due to their relentless sales efforts, Maui Brewing Co. products can be found in 15 countries and 25 states.

Sticking true to the original commitments of the owners the brewery operates in a highly environmentally conscious manner. Solar panels provide most, if not all, the electricity required to operate the brewery – there are even free charger points for electric vehicles in the parking lot. The spent grain leftover from the brewing process is shipped to local farms where pigs are said to be seen impatiently smiling as the delivery truck is unloading. 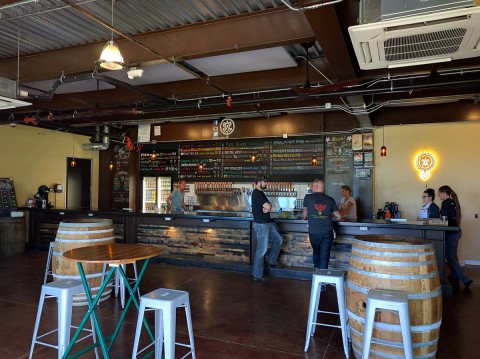 The 100% increase in the number of commercial craft brewers on Maui is due to the new boy on the block – Kohola. The brewery was started by co-founders Ian Elumba (Chief Beer Officer) and William Ramirez (President) who migrated to Maui with his family after wanting a change from a successful IT career. It took a few years, lots of experimenting and “series of unlikely events” until late last year when the brewery took over the facilities vacated by MBC in the outskirts of the delightful old whaling town of Lahaina. Kohola is the Hawaiian word for Humpback Whale which explains the whale-themed logo.

The brewery and tasting room are very different from MBC’s new palatial surrounds. Funky is the word that comes to mind as you pull into their parking lot located at the back of small industrial park next to the brewery’s grain silos. Inside the cavernous warehouse that serves as the brewery, one corner is set up with a bar and some high tables and chairs. The staff are so welcoming and personable, communicating

a sweet feeling of ‘happy to see you and ‘wow – another new customer found us’. As we sat at the bar, William was patient in explaining the beers available. Having just opened in late December 2015 the brewery already offers seven different beers including a good mix of ales and lagers with a very decent porter thrown in for good measure. My personal favorite was the Smooth Tide which had a surprisingly pleasant roasted barley old-world ale flavour. 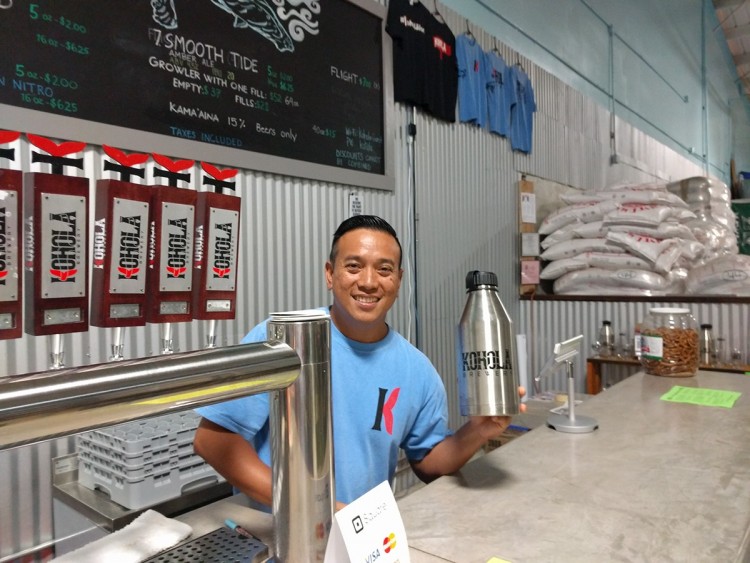 Kohola beers are currently only available at the brewery in the nice airy tasting room, and via kegs in a few select restaurants in Maui. But the owners are working hard to make the beer more widely available across the island. It is however, possible to take Kohola beer back to your hotel/condo/campsite in a growler. Even growlers are different in Maui. They say that necessity is the mother of invention so maybe I shouldn’t have been surprised to see a stainless steel insulated growler – picture a big growler-shaped thermos flask for beer!

The Hawaiian islands have a long history of competing and often warring tribes. So maybe it was no surprise to hear that amongst Maui’s brewing community there did not appear to be much love lost for Kona Brewing. Located on Hawaii’s Big Island, since 2010, Kona Brewing has been owned by the US mainland-based Craft Brew Alliance. Kona has a big presence in the Islands. Based on various comments I picked up Kona seems to use ‘big brewery’ tactics to get its products placed in restaurants around Maui. Needless to say these tactics are not friendly towards the smaller brewers and make it challenging for the smaller brewers to gain a foothold on their home turf. That said, MBC and Kohola are clearly very committed to making sure that Maui-created beer becomes another reason to visit this jewel of the Pacific.

If you have the good fortune to visit Maui, be sure to check out your expanding craft beer options on this island paradise.

Simon is a longtime beer fan and member of CAMRA Vancouver.