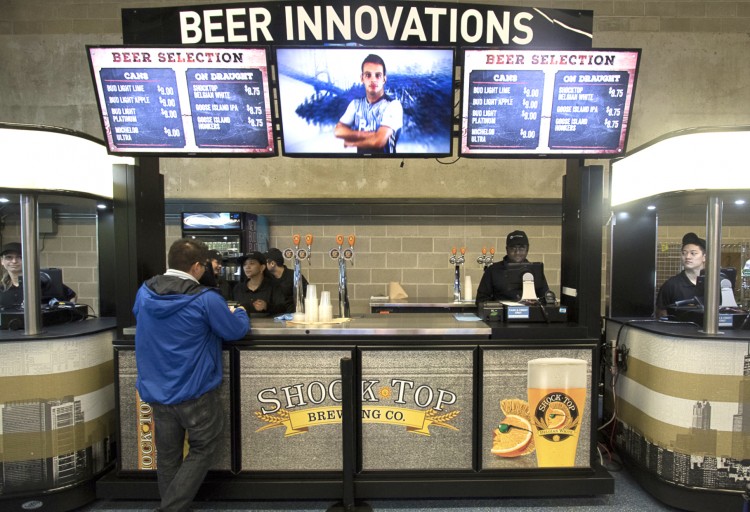 I can’t even fathom what the new AB Inbev SAB Miller monstrosity is going to look like, and what it is going to do to the availability of craft beer. What I do know is that I need them to stop owning the beer taps and fridges at Vancouver stadiums! Craft beer is not a rare and exotic specialty beverage – there’s plenty of it around, it’s readily available, and it’s a beverage enjoyed by the masses. So why, why, why are there so few opportunities for craft beer to make its way into our stadiums?

The reason, I keep being told, is that there’s just too much money involved – big corporations are throwing so much money at owners of stadiums and sports teams that they just can’t refuse it.

I get that. But in accepting that kind of benefit in the short term, I think those owners are doing their future selves a disservice. There are fewer bodies in the stadiums these days. The old hockey and football fan-base is dying off. Owners need to get the younger folks excited about their product. And how do you get the entertainment-on-demand generation excited about your product? How about making going to a game fun and, dare I say, sexy, by providing them with craft beverages? Craft beer is hot! It’s sexy! It’s what all the cool kids are drinking! And it follows that they’ll go to places where it’s available – just like in other craft beer loving lands.

Portland has great craft beer and cider offerings at Providence Park where the Timbers and Thorns play to huge crowds, even in years when they’re not winning the cup. CenturyLink Field in Seattle (home to the Seahawks) has many beer alternatives. Quite a few are from craft breweries bought by corporate beer (Elysian, Goose Island, 10 Barrel) and by Pabst’s subsidiary, Craft Brew Alliance (Kona, Red Hook). But they do have a strong showing of local craft as well: NoLi, Silver City, Georgetown, Mac and Jacks, Freemont, Diamond Knot, Black Raven, Schooner, Big Al’s and Bale Breaker, and imports from Alaskan Brewing.

Safeco Field in Seattle offers craft beer to Mariners fans– and you can bring your own food into the stadium, which is just so civilized! But what makes Safeco such a craft beer stand-out is the cask beer sold in, not one, but two areas in the stadium, via proper beer engines. Friday nights are firkin nights – local breweries provide the firkin which is tapped with mallet and tap and served straight from the keg. The Hit it Here Cafe has eight taps of rotating local craft beer. The list of what you can drink, and where, at Safeco is way too long to list here. I want that kind of choice here in Vancouver.

The tiny Pacific Coliseum at the PNE saw an opportunity a couple of years back.and created a “craft beer corner”, where they sell several different styles of locally-brewed Parallel 49. And the equally tiny Scotiabank Field at Nat Bailey Stadium, the first local stadium to offer alternative beer choices, has increased those offerings – because people asked for it and they actually listened to what their capacity crowds wanted. Their Craft Corner is a collaboration between Big Rock Urban, Howe Sound, Steamworks and Whistler Breweries, each offering several different craft beer choices.

But the big guys downtown, BC Place and Rogers Arena, have been slow to adapt. I gave up my BC Lions season’s tickets a few years ago, partly because there were no craft beers on tap. I was very clear to my fan retention agent that that was a large part of why I was doing so. I want to be able to enjoy a craft beer when I watch a game. If they’re not going to offer me one at the stadium, then I’m going to watch the game somewhere else. I’m not actually suggesting that’s why attendance is down, but if it’s possible to woo some people back and attract new ones by offering local craft beer – why wouldn’t you?

Craft beer has started to infiltrate BC Place! But you have to go looking for it. And you may have to look hard; there are very few kiosks and they aren’t very well signed. Some even have fun names, like ‘The Thirsty Pigeon’. But they do exist.

The BC Place beer contracts are shrouded in secrecy. I have asked around and no one was willing to lose their contract by telling me the exact contents thereof, and fair enough. But I have been able to piece together some details on which I am going to rely for no other reason than it suits me to do so. It is at your own risk if you rely on them in turn. AB-InBev (or whatever the megacorporation is calling itself these days) has rights to 90% of the alcoholic beverage sales opportunities in BC Place. Everyone else has to fight over the remaining 10%. The only exception to that are the private suites, which can request other beverages, as long as they do it in advance, and they total no more than 70%. The other beverages available cannot be advertised in or outside the stadium. No logos, no signs – just the generic title “craft beer” on the top of the kiosk, and tap handles for the draft products are allowed. However, if you contact the food and beverage folks at BC Place, they can send you a list of what’s available. Like, for example, the list below that they sent me when I asked what I’d be able to drink at the two-day Rugby Sevens tournament held in March 2016:

“Thank you for reaching out to BC Place stadium, please see the beer and cider menus below for the HSBC Canada Sevens. 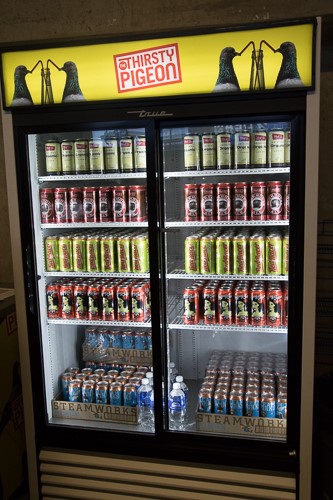 If you look carefully you can find the craft beer

On that list of beers, I see three craft beers, and no craft ciders. For those less caught up in semantics than I am, who may be wondering what I mean by only ‘three craft beers’: the “domestic” are all AB-InBev beers; the “premium” are a mix of AB-InBev brands, crafty brands (those owned by AB-InBev but made to appear as craft – hello Shocktop), and bought-out brands (those that were formerly craft but who have been bought by AB-InBev, and brew their flagship beers in AB-InBev breweries).

The “tall cans” include three craft (Steamworks, Parallel 49 and Red Racer) and two bought-out by corporate (although I’m guessing the Mill Street Organic is currently still brewed at Mill Street in Toronto). All three craft beers are from bigger breweries, which, depending on whose definition of “craft” you apply, might actually be getting too big to be considered craft any more. Lovely beers, those three, and I’m happy to have them on offer. I just want to underscore that it took three big local breweries and their clout to get craft beer into BC Place.

Happily, there was even more craft beer in BC Place for the Rugby Sevens tournament in March. Postmark Brewing partnered with Rugby Canada to brew 20,000L of their IPA, named Sevens for the tournament, to be sold at BC Place in 355ml cans, on tap at rugby pubs and in 650ml bombers at liquor stores. There were two specially-made kiosks to sell cans of the Sevens IPA, as well as Postmark’s Blonde ale, at BC Place. Special kiosks! They weren’t branded, but they were advertising craft beer sales to the rugby-loving masses. It warmed the cockles of my wee little heart (as did the 6% ABV of that IPA). Postmark was even allowed to have their beer sellers in t-shirts advertising ‘local craft beer’ – and naming the sections where you could purchase it. Because I am me, I hiked around the stadium each time I wanted a beer. I wanted to put my money where my mouth is, and to send a message to the powers that be that craft beer sells. Especially since the other kiosks around, labelled in very large letters “Beer Innovations” and suggesting you “Experience New Beer” (probably to entice the uninitiated) carried Bud Light Lime, Bud Light Apple, Bud Light Platinum, Michelob Ultra, Shock Top and Goose Island IPA.

My excitement about the amazingness that was the Rugby Sevens (the event in general and the craft beer options both – it was fun and sexy!) just galvanizes my urge to keep soap-boxing about craft beer in stadiums. I do not think we should be mollified by 10%. It’s a lovely start. Now that craft beer‘s foot is in the door, let’s keep up the pressure and demand more. It only takes a moment to shoot off an email to BC Place praising their foray into craft beer and asking for more local brands to be available. When you go to the stadium, vote with your wallet. Don’t buy the Budweiser, even though it’s more convenient – walk around until you can find the craft beer and buy it instead – it tastes so much better, and walking is good for you.

As for Rogers Arena, I think a quick trip to their website under Food and Beverage says a lot: Budweiser is the only beer listed. However, if you contact them, they’ll kindly send the following list of craft options, available at the new bars in the West tower:

“We are now proud to offer some great craft options:

Seven craft options. Not too shabby! Their hiring of new food and beverage people is to the benefit of craft beer lovers. Please support craft beer there too, by buying it, and shooting off an email praising their new direction. What’s that stat? One compliment/complaint represents 100 consumers who couldn’t be bothered to comment? Give them the numbers to validate those seven craft options and add more!

I love craft beer. I love Vancouver. I love sports. I want my loves to come together more often, and not make me choose between them. And I want my city to become truly world-class by showcasing all its local wonders, no matter how much AB Inbev offers them not to.

Listen to Rebecca every second Tuesday on CBC Radio's On The Coast. Read her blog at http://becksbeerblog.blogspot.ca