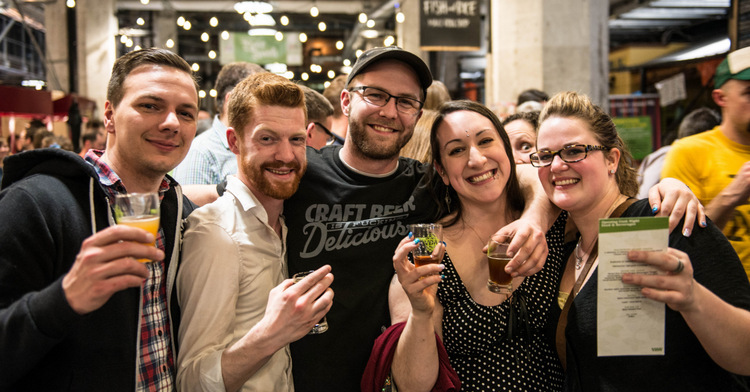 Victoria Beer Week launched in 2014 with 2,500 people attending 14 events in various venues throughout Greater Victoria. Last year, the audience for the festival jumped to more than 3,000 people and VBW2016 expects to see that rise to 3,500 or more.

Some of the most popular events from 2014 and 2015 will return in 2016 along with some new, exciting options. Beginning on a Friday night for the first time ever, the festival will kick off with two consecutive Cask Nights at the Victoria Public Market on Friday and Saturday, March 4 and 5. These Cask Nights, which are some of VBW’s signature events, will each showcase more than 25 cask-conditioned beers from breweries throughout British Columbia. Some breweries will be participating in both nights, but they will be providing unique casks each time.

Also on the opening weekend is the Brewers’ Brunch at Spinnakers Brewpub, a fundraiser for the BC Craft Brewers Guild that will give ticket buyers the opportunity to rub shoulders with some of BC’s best brewmasters while lining up for bacon and eggs at the buffet. It takes place Saturday, March 5 at 11:00am. Elsewhere that same day is the Homebrewing Workshop at Category 12 Brewing (11:00 am start) and “Pedalin’ for Pints”, a bike tour between four breweries that also runs on Sunday afternoon (1:00 pm start each day).

Beer School takes place at Swans Brewpub on the afternoon of Sunday, March 6. Two classes will be offered, including one by Greg Evans, Victoria’s renowned beer historian. Full details of both classes will be posted online by mid-January. On Sunday evening, the Drake Eatery hosts Dubbel or Nuthin’: Craft Beer Cocktails and Canapes at 7:00pm.

Monday, March 7 offers the choice of pizza or trivia. “Beer, Pizza, More Beer” returns to Pizzeria Prima Strada, but this year there will now be two seatings (5:30pm and 8:00pm) to accommodate demand (i.e. it sells out quickly!). That same night, the Northern Quarter is hosting a brand new event called the “Ultimate Craft Beer Quiz”, which begins at 7:00pm.

How do you choose between these two events on Tuesday, March 8? If sour beer is your pleasure, then you’ll want to attend “Pucker Up” at the Churchill and Garrick’s Head Pubs (7:00pm). But then you’ll miss out on “Drink in the Story” at the Drake Eatery (7:00pm), which features three female members of BC’s brewing community telling the stories of their breweries, their beer and their own experiences working in this male-dominated industry. It is International Women’s Day after all.

“Beer-B-Q” is a brand new event for VBW2016. It features barbecue food options alongside great BC craft beer at Victoria’s own rip-snortin’ country bar, the Duke Saloon (Wednesday, March 9, 6:00pm start).
Another perennial quick sellout, “Beer, Cheese, More Beer”, returns in expanded form in the Victoria Public Market on Thursday, March 10, 7:30pm. And VBW returns to the Victoria Public Market on Friday, March 11 for a new event called “Fishing for Beer”, which will include several fish and seafood options from market vendors as well as an optional crab boil plate.

Closing out VBW2016 is “Lift Off”, a new event that will be held outdoors at historic Market Square on Saturday, March 12, from 1:00pm to 7:00pm. Growing out of last year’s popular Thunderdome event, Lift Off features 15 brand new beers to be sampled by a potential audience of 1,000 throughout the afternoon. Expect a pop-up liquor store on site that will be the first place to buy all those new beers that weekend.

Beyond these diverse offerings, numerous other events including Cooking with Beer classes, tap takeovers, and brewmaster dinners will be scheduled at various Victoria venues throughout the week.

The full schedule is available at www.victoriabeerweek.com. Tickets are on sale now.