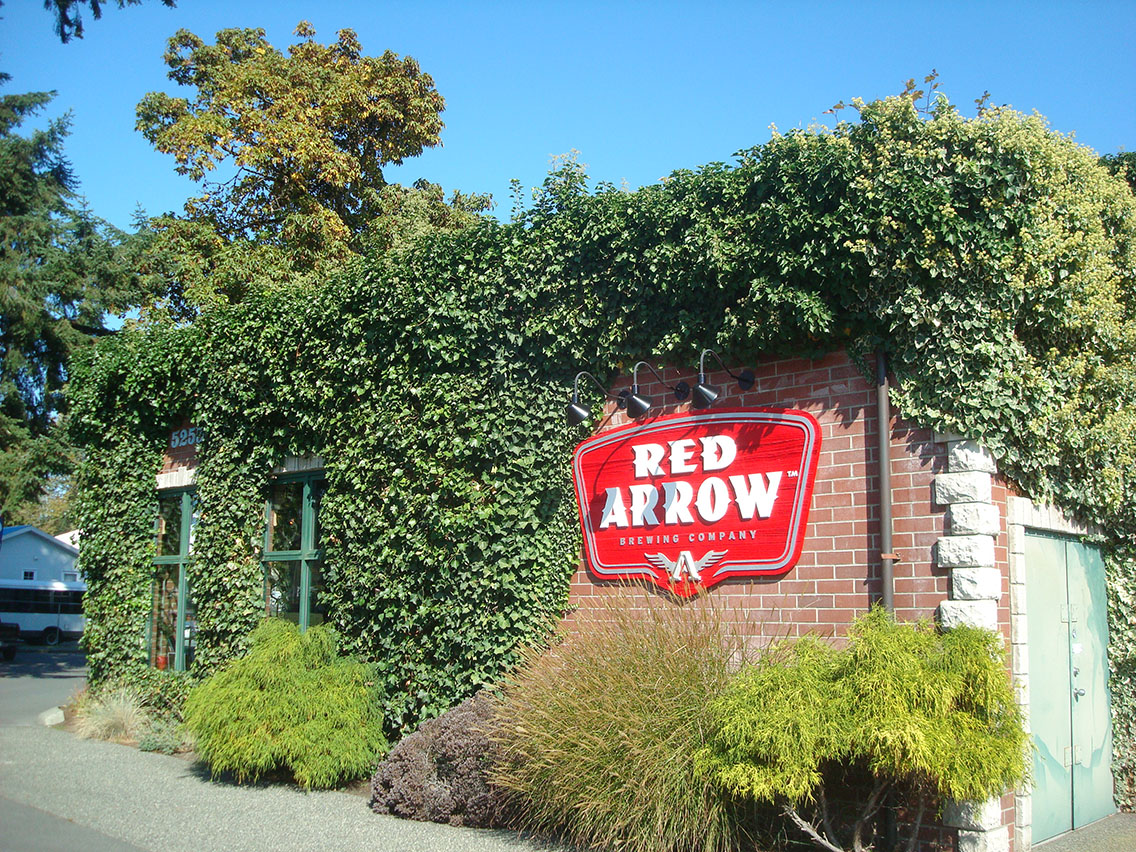 One of the most interesting tasks that I am involved in for the Great Canadian Beer Festival is selecting the beers. Gerry Hieter, the GCBF chair, and I sit down a month or so before the festival and pick what we hope will be an interesting selection. But we often find that, although we may be familiar with most of the breweries and their beers, there are always some that we’ve never tasted. So we finish up guessing. To avoid this Gerry suggested that we do a short brewery road trip. 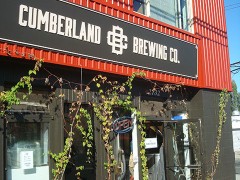 It was decided that, at the very least, we should be current on the new breweries on Vancouver Island, and then we should catch up on some of the multitude of new breweries in Vancouver. So on a Thursday morning in late September we drove North out of Victoria. Our first stop was Red Arrow Brewing
about 40 minutes away, on the south side of Duncan. This brewery opened last June in a former motorcycle factory. (The company, Arrow Custom Cycle and Polishing Ltd. specialized in building custom Harley Davidson motorcycles and parts and accessories. David Saari had only four employees but his bikes sold for $50-100,000!) The building is ideal for a brewery. It is beautiful, made of red brick covered in ivy, and has a patio for special events. The former showroom has been converted into a tasting room featuring a growler bar, tasting flights, and retail store. Lance Steward and Chris Gress are the principal owners, both formerly associated with the Craig Street Brew Pub in Duncan. Chris proudly showed us around his 20-hL brewhouse and pointed out the various features of the building. One of the most impressive legacies is the freight elevator formerly used to move bikes up and down, but now used to move equipment and supplies. Chris mentioned that the local water is great, “but the water is so soft that the brews need yeast nutrients to be added!” We tasted a couple of his beers. Kustom Kolsch is a clean version of the German classic, slightly spicy and herbal, and Threesome Ale is brewed with honey, hemp, and Hibiscus, which gives a nice tart finish well balanced by the honey. 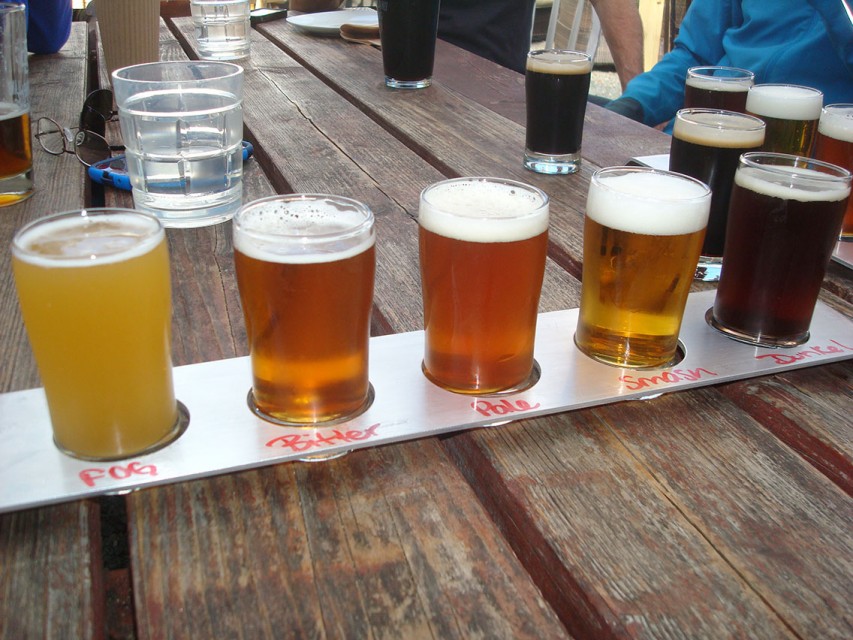 Next we stopped for a quick lunch at Longwood Brewpub in Nanaimo. This well-established pub was as expected – great food, great beer! An hour’s drive north brought us to Cumberland, a once flourishing coal mining town. This town was named “Luckiest Town in Canada” in 2002 by Labatt Breweries, due to its phenomenal consumption of Lucky Lager. Cumberland Brewing has changed all that. In one year the town has gone from being a bastion of bland beer, to embracing the range of beer styles that Cumberland’s brewer, Mike Tymchuck, has introduced into the community. We had a tasting tray of Forest Fog (unfiltered wheat ale), Just A Little Bitter, the excellent Red Tape Pale Ale (my favourite), Summit Smash (made with two row malt), the very smooth Dunkel, and finally the Oatmeal Stout. We were sitting on one of the picnic tables on the patio at the back of the pub. This was a great location in a small town and we felt very relaxed. We had great beers, good company. This was obviously a true “community brewery”. It would have been easy to sit on the patio all afternoon, but Gerry had plans for us. We were to go next to Gladstone Brewing in the heart of Courtenay.

First we checked in to the Westerly Hotel and Convention Centre in Courtenay, noting Forbidden Brewing just across the parking lot. A short trip brought us to Gladstone Brewing, a funky downtown brewery with a busy community tasting room staffed by knowledgeable enthusiastic people. The owners are Daniel Sharratt and Alexandra Stephanson. Head brewer is well known former Victoria homebrewer, John Adair, most recently brewing at Parallel 49 in Vancouver. We tasted an excellent Czech-style pilsner (6%) made with European malts and hops, and a well-balanced IPA with lots of hop flavour and aroma.

After Gladstone we walked to a small cask festival at the White Whale, a pub/restaurant that serves local beers, seafood and farm produce. We met with Aaron Rail (who we knew as a chef at Spinnakers) and Max Oudendag, two of the owners. There were five casks from Russell, Gladstone, Tofino, Parallel 49 and Bridge Brewing, and we sampled them all. By the time we got back to the hotel Forbidden Brewing’s tasting room was closed so we’ll have to check that out later.

The next morning we took the Nanaimo to Horseshoe Bay ferry, drove through West Vancouver, over the Lions Gate Bridge, and into downtown to our hotel. A short cab ride brought us to Strange Fellows Brewing on Clarke Drive. Here we met up with our old friend, Iain Hill, who, for 19 years, guided the brewing in all the Mark James Group brewpubs, while brewing some great beers at Yaletown in Vancouver. Iain and his partner, Aaron Jonckheere, are the two “Strange Fellows”. But they make great beer! The brewery is impressive and has lots of room for expansion. The brew house is a Ripley 30 hL system. Iain proudly showed us a newly acquired 6000 L French oak Foudre (or cask) for maturing some of their beers. Iain is very keen on sour beers, so we sampled his Roxanne Black Raspberry Sour Grisette. This beer starts as a Saison and is then soured in the kettle, followed by the addition of several hundred pounds of black raspberries: delicious! Iain has been developing multi-culture yeasts for years at Yaletown (remember his award winning Oud Bruin?). We also tasted an excellent dark IPA made with Maris Otter, black, dextrapils, and chocolate malts, and Magnum bittering hops, plus Amarillo and Centennial, and finally dry hopped with the same hops. 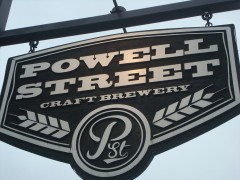 After that we walked up busy Clark Drive to Adanac Street. Here there were two breweries. We chose Bomber Brewing and found one of the tiniest tasting rooms ever. Across the way was Off The Rail, but we had to skip them in the interests of time. Up on Franklin Street is Callister Brewing owned by Chris Lay and Diana McKenzie. This is an interesting set-up as four breweries share this facility. First is Callister itself, and we tasted La Grand Maison (a French Saison) 6.8%, and Nordic Saison with Juniper, rosehip, Yarrow, and burdock, also 6.8%. The three other brewing brands are Brewery Creek Brewing (brewer: Chester Carey), Machine Ales (brewers: Adam Henderson and Matt Kohlen) and Real Cask (brewer: Adam Chatburn).

From there it was a short walk to Powell Street Brewing where we met award winning owner/brewer David Burkett. David started the brewery as a nano-brewery in his spare time, but since winning Canadian Brewery of the Year in 2013 he has had to expand and is now in a very nice large facility. He showed us around and then we sampled some of his beers. The White IPA (6%, 56 IBU’s) was very refreshing. We were enjoying Ode De Citra Pale Ale when David got us to sample his Fresh Hop IPA (7%) made with Centennial, Cascade and Chinook hops: it was very “moreish”.

So, did we accomplish our objectives? I’d say that we did and we didn’t. Certainly we visited some great brewers and tasted some excellent beers. Good Beer is Alive and Well in British Columbia! But will we have an easy task next August? With the rumoured twenty new breweries opening between now and then, I think we’ll still finish up guessing!