Craft beer is alive and well on the Sunshine Coast. With the emergence of both Townsite (Powell River) and Persephone (Gibsons) as two of the most well respected breweries in BC, combined with the founding of CAMRA BC’s Powell River Branch, local craft beer lovers are finding that they no longer need to travel to Vancouver and Victoria for great craft beer events.

January and February are traditionally slow months, but here are a few upcoming events.

This is the second February that Persephone Brewery has organized a major craft beer festival in Gibsons and, if this year can live up to the standard of last year’s event, it will be a must-attend festival.

Last year, inspired by the highly successful Inaugural CAMRA Powell River Craft Beer Festival, the Persephone crew put together their own event to help raise money for the Sunshine Coast Association for Community Living (SCACL).  The first Sunshine Coast Craft Beer Festival was just as successful as Powell River’s, selling out its 230 tickets and raising just over $4,000 for SCACL.

This year, Persephone is expanding their event, with 350 tickets available (click here) and by increasing the participants pouring to over 20 from the 14 of last year. As it was last year, there will be a cidery and a distillery in attendance for those who want to sample local craft cider and artisan spirits. And, like last year, there will be a booth set up by local homebrewers giving out samples of their beers.  For a full list of those pouring at the event, see the list below.

Tickets are $30 for CAMRA members, $35 for Non-CAMRA members and there is also a special ticket and growler fill price for $49 (see Eventbrite page for details). Tickets include a 5-oz tasting glass and three drink tokens. Additional drink tokens will be sold for $1.50 each. Food will be available from local food trucks that will be on sight.

One of the unique aspects of this event is the after parties at local pubs. Festival-goers will be able to grab a shuttle bus, for a donation, and be driven to the participating pubs and to a local hotel who are offering a discounted room rate for the night of the event. All proceeds from the shuttle bus will go towards the SCACL.

“We consistently heard from both brewers and festival-goers that this was one of the most fun events of its kind in BC—not just the festival itself, but the after-party events too”, says Dion Whyte, Persephone’s General Manager. “This year’s location promises to be special. The greenhouse facilities at Quality Farms are being converted to a comfortable, inviting and memorable venue that connects three things we at Persephone care deeply about:  craft beer, local agriculture and fun community events!  We expect to sell out again this year well in advance of the event.”

This annual beer paring dinner is not well known outside of Powell River, but is truly one of the best beer pairing dinners held anywhere in BC and word is beginning to spread beyond the Upper Sunshine Coast about this event. Even at $75 a ticket, $70 for CAMRA members who have special access to a block of tickets each year, this four-course meal sells out before tickets even go on sale as the wait list each year exceeds the amount of tickets available. The event has grown in stature to the point where it attracts people from as far as Victoria and Vancouver who make the trip just for the event.

If you do not have tickets for this year, you are out of luck, but do yourself a favour and mark your calendar for late-November 2016, when tickets do become available for the 2017 dinner and contact the Townsite Brewery, or the Powell River branch of CAMRA if you are a CAMRA member anywhere in BC

Because the Invitational Brewmaster  Dinner sells out every year (see above),  Townsite Brewery made a decision years ago to take advantage of the fact they have some of BC’s best breweries in town and organize a fun and unique craft beer event the night after the beer pairing dinner each year. This year’s event is being held in the brewery itself and is entitled a “warehouse speakeasy party”.

On their Facebook page, Townsite describes the event as:

“It’s all about never doing anything twice! This time we are having ourselves a good ol’ fashioned Speakeasy and games night in the Warehouse of the Brewery! $15/ticket gets you 2 beverages and snacks.”

Beers from Category 12, Driftwood, Persephone and of course Townsite will be on tap for this event.  Tickets are still available at the brewery (it will sell out) and this event will not only be unique, but a lot of fun as Townsite does it up Pow Town style.

CAMRA Powell River is taking their AGM on the road this year due to the growing membership of the branch on the Lower Sunshine Coast. The event is free to attend but is open to members in good standing only. Annual branch elections will be held and branch business discussed.

A cask of Persephone Brewery beer will be tapped and the Lighthouse Pub is offering 10% off craft beer sales to CAMRA members that day. If you live in the Sunshine Coast area and want to know more about CAMRA Powell River, check out www.camrapowellriver.ca or e-mail [email protected]. You will be able to join up at the AGM and participate if you so desire. 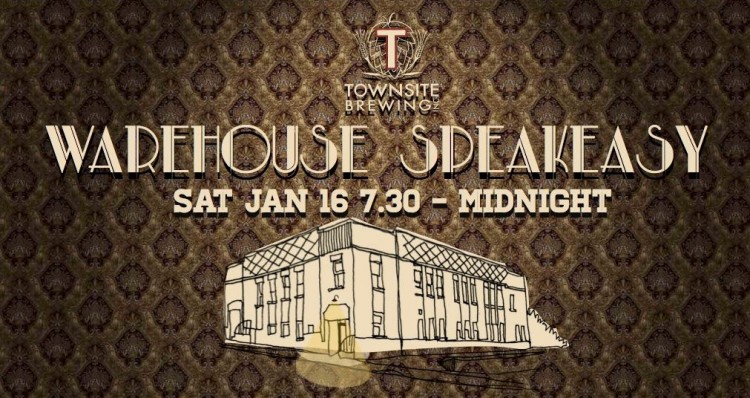