The very first thing I would like to mention about Adem Tepedelen’s The Brewtal Truth Guide to Extreme Beers is how much my pocket book and liver suffered from researching this book. This, of course, is par for the course for us extreme beer drinkers and we would probably not have it any other way. Though there were a few moments, universal to all craft beer drinkers, I’m sure, when I wished for a superhuman liver and an endlessly deep wallet. Reality soon returns however and I just count myself lucky that there are such strange and wonderful beers to ruthlessly abuse my liver, so unlike the beer wasteland that I read about in 70’s North America.

The next thing I would like to mention is that Tepedelen passes my personal grade of all critics, beer, wine, literary or otherwise, in that he makes me want to participate and, although honest, puts his subject in a very favourable light. The obvious fact in writing about extreme beers is that although they might be extreme, some of these beers might not be without flaws or, much more probable, is that many extreme beers might create such unique flavor profiles that it alienates many drinkers. Portland’s Hopworks Urban Brewery (HUB)’s Ace of Spades, for example, is not a beer without flaws, in my opinion, but reading Tepedelen’s entry makes me want to drink one. A good critic is one who gets you excited, interested or curious about something that you might otherwise have dismissed or put off. Tepedelen sees the best in some sometimes very difficult beers. Another example of this is his entry on Russell Brewing’s Hop Therapy, here included for its 100 IBUs, which I had tried before and wasn’t overwhelmed with but was glad I was convinced to try again.

Hop Therapy is, unfortunately, one of only two BC beers included in the book. Although Tepedelen states in his introduction he avoided overly obscure beer in his book I haven’t seen Driftwood’s Son of the Morning in a long while, although knowing my luck as soon as you read this it will be back on the shelf. The only other Canadian beer is the lovely L’Impératrice by Le Trou du Diable. This beer only gets a single star in Tepedelen’s rating system, not because it isn’t good, but because it isn’t very extreme. The two BC beers get three stars respectively. Looking at the shelves of BC-made beer recently makes one think that BC might be on the verge of an extreme beer outburst.

All that said, the very obvious next thing to mention is that this book has a massive double personality that might not be apparent by the title. In case you were not aware, Decibel Magazine is a metal magazine and this book is the collected columns from that magazine. So this book is mostly about extreme beers but it also has a second book about the relationship, or similarities between craft beer and metal music and culture, slipped in between the pages. Two whole chapters are devoted to beers that aren’t necessarily extreme but would be interesting to metalheads. 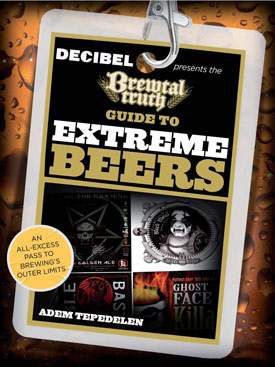 One of the chapters is devoted to beers whose names or labels make reference to the devil, hell or Satanism in some way and the other chapter profiles beers that make reference to metal music or culture either in the name or label, explicitly or subtly. Tepedelen reviews on these beers are still very readable and many are still genuinely extreme but the reader who was only expecting a guidebook to extreme beers and has little or no interest in metal music might be irked by this inclusion.As the day grows long and our book shelves of beer books grow increasingly large, more and more books will target a smaller and smaller niche readership. Just for an example, a book about cooking with beer or about aging beer might not be for every beer drinker. A book discussing the similarities and relationship between beer and metal culture is not necessarily a bad idea but forcing it into a guidebook about extreme beers might further limit that books already limited readership. If you’re a metalhead who likes extreme or even craft beer then this is clearly a must-own. I dabble in metal music so I took this book, once I figured out what it was doing, as an opportunity to discover or rediscover some metal (BC’s own Bison BC is highly recommended). Tepedelen’s music pairings, much like a food pairings, did that wonderfully and with the help of YouTube, much more easily then tracking down a cheese you might not like. An extreme beer drinker who doesn’t like metal music might not be so enthused.

A guidebook to the increasingly deep waters of extreme beers is needed. I’m just not sure that this two-books-in-one, despite Tepedelen’s affable writing, is the one for non-metalheads. However, if you’re an extreme beer drinker who hates metal music this book should still not be ignored, the only one of its kind, and maybe the one that all other extreme beer guides will be compared to. And, who knows, maybe you don’t hate metal music as much as you thought you did. Drink a couple of these beers and you might find it the only fitting accompaniment.