McMinnville, Oregon, is a small city of approximately 33,000 people in the heart of Oregon’s wine country. Its main claim to fame, besides wine, is the famous UFO sighting in 1950 reported by a local farm couple. Mr. & Mrs. Trent claimedthey saw a “slow-moving, metallic, disk-shaped object” flying low near their farm on the evening of May 11, 1950. They took some photographs which eventually made their way via the local newspaper to Life magazine. These images were analyzed by experts during subsequent decades and, while skeptics have concluded that the pictures are a hoax, many others consider these particular photos as some of the most credible evidence ever of an actual UFO sighting. To that end, McMinnville now hosts the largest annual UFO festival in the Pacific Northwest, and the second largest in the United States.

We’ve visited the town before. So what brings the BeerSeekers back to the middle of wine and UFO country? As it turns out, seeking and discovering great new beers!

McMinville was a midway point on a two week loop through Oregon planned around our standard mix of beer, sports, and McMenamins brewery hotels. The objective, besides relaxation, was to uncover new ales, cheer on the Whitecaps in Portland and Seattle, and get as many stamps as possible in our McMenamins passports.

For those not familiar with McMenamins, they run a chain of eclectic brewpubs with properties throughout Oregon, and some in Washington. They have a number of unique, historic properties that they have redeveloped into hotels. While the accomodations are often “European style” (the rooms can be small, with shared bathrooms down the hall), they have a whimsical, funky atmosphere that you can’t get at other hotels.

In McMinnville, we stayed at their Hotel Oregon, a landmark not short on historical significance. This 4-story brick building has stood in McMinnville since 1905 and has been, among other things, a restaurant and lounge, a banquet hall, a bus depot, a soda fountain and a beauty parlour. It currently sports 4 bars including an incredible rooftop patio which gives the patrons a 360 degree panoramic view of the local valley.

Each room at a McMenamins hotel is given a meaningful name, often based on the unique character of the local area. At Hotel Oregon, we happened to be assigned the one and only UFO Room, which featured a brief description of the aforementioned UFO sighting upon its walls. After settling in to our room, we were ready to explore the town and seek beer. Our two day visit took us to three breweries and a taproom, all within walking distance. 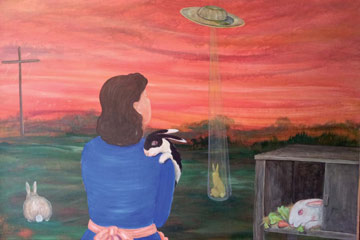 Grain Station Brew Works is a small family-friendly brewpub, in operation since 2013. It is set at the back of a large barn-like building with a large patio featuring a beanbag throwing game. At the time we visited, they had nine of their 10 beers on tap, plus a guest cider that rounded out our sampler tray. We particularly liked their Pilsner (just a little hoppy), their White IPA (notes of pink grapefruit), their Red ale, their IPA (citrusy with just the right amount of hops), and their Stout (nitro and a little chocolatey).

McMinnville Malthouse is in the very same building—access is literally just down the hall, past the bathrooms. They are, however, a separate entity. According to state liquor laws, you cannot even purchase a beer in one establishment and walk with it the few steps down the hall into the other. The two share a symbiotic relationship, serving food from the same kitchen. The offerings on tap vary according to how busy they are, and are always changing. During our visit there were five beers on tap: a cream ale, a Hefe, an ESB, a Pale Ale, and a Rye Ale. After some discussion amongst the husband/wife ownership, we were also served a sample of a black IPA that was not on tap (awaiting carbonation). Oh, was it tasty!

Golden Valley operates a brewpub in McMinnville and another in Beaverton, Oregon. The family also owns the Angus Springs Ranch, which supplies beef and produce from their gardens in season.

Growlers Tap Station is a small taproom with a great variety of fresh craft. There are over 20 beers on tap, mostly brewed in Oregon along with a few beers from California and elsewhere. A sampler tray consists of four 5-ounce beers of your choice.

Heater Allen Brewing brews German-style lagers. We were unfortunately unable to visit because their taproom is only open the second Saturday of each month.

McMinville bills itself as a wine and UFO-history destination. With at least five establishments brewing or serving crafted malt beverages, it can also appeal to the beer tourist and is a worthwhile stopover when discovering Oregon.